Joseph Suaalii was quick to point out the best lesson he learnt during his first week in NSW camp.

“I think everyone has their own strengths, but how players prepare for games, I’ve already taken tips from Nathan Cleary, ‘Cooky’ [Damien Cook] and Isaah Yeo,” Suaalii said.

Suaalii was never going to play for the Blues on Wednesday night, but the Sydney Roosters, NSW and coach Brad Fittler always knew the 18-year-old would relish any time spent with some genuine superstars.

Fittler is happy to be patient with Suaalii before unleashing him against Queensland. He said the Roosters played the waiting game with their teen wonder, and were already seeing the benefits. 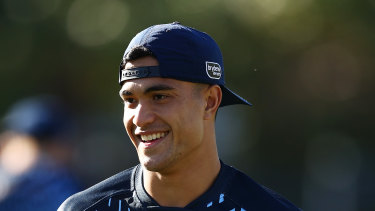 “They had the opportunity to play him earlier last season, but they didn’t, and not everyone would have done that,” Fittler said.

“The Roosters had some huge injuries, but they kept holding him back, and he was able to learn a lot.”

Luke Keary, who will captain the Roosters in Canberra on Sunday after his co-skipper Jared Waerea-Hargreaves was ruled out with injury late Saturday, said it was amazing what Suaalii had done in just 12 NRL games, especially on the wing where the Roosters demanded a lot of physicality.

“He’s a special kid, I spent a lot of time last year with him because of injuries and us staying back in Sydney [for rehabilitation],” Keary said. 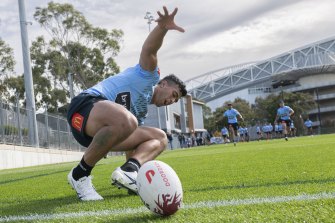 The Roosters teen stretches out at Blues training on Thursday.Credit:Helene Cochaud/SMH

“You can see why a lot of teams wanted him. He will be good.

“Robbo [coach Trent Robinson] fought for him to play before he was 18, gave him a little bit of a taste, and brought him on the wing

“Wingers at Roosters need to play a tough style of footy. We expect the wingers to carry the ball 15 to 20 times on play one or play two. We’ve been lucky to have the likes of Blake Ferguson, Brett Morris, Daniel Tupou and now Joseph. You not only need to be able to finish tries, you need to take those tough carries, and not many wingers do both.

“He’s had a baptism for fire, but it will be really good for him. I see him as a centre, then a fullback at some stage later in his career.”

Only three years ago Keary was one game away from realising his own Origin dream, only to be concussed in Newcastle. He later got a one-off chance in game one in 2020, before a knee injury ruled him out of last year’s series.

As for his knee, Keary said: “It’s taken a bit longer than I thought it would take to get the confidence back. The ankle [injury] in the pre-season hurt me and I missed training. But each week I’m getting better and I’m starting to see the game how I did a couple of years ago.”