As Carlton’s Charlie Curnow picks up the ball and snaps a goal to put his team in front midway through the second quarter at the MCG on Saturday night, Stuart Wenn makes a bold statement.

“They might be the real deal, Carlton,” he says from inside the AFL Review Centre. 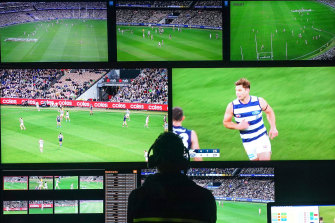 Inside the ARC: The experts have eyes on the action from all angles.Credit:Scott Barbour

Wenn, one of the game’s most experienced former field umpires and the man in charge of score reviews during Saturday night’s game in Melbourne, immediately reviews his own call.

Geelong would go on to stamp their authority on the Blues, and Wenn’s comment from the heart of the league’s sometimes controversial video review system was the only thing he got wrong that night.

In fact, errors in the review centre are rare. According to statistics provided by the AFL, there were 127 score reviews in the first 17 rounds of the season. Of those, 126 have been deemed correct. Thirty-two of the reviews resulted in an umpire’s decision being overturned. In simple terms, it means that one in four reviewed decisions involving a score would have been wrong without the aid of the video review system. 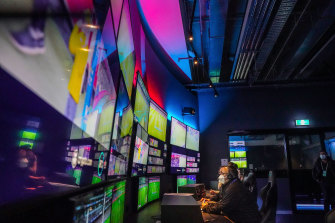 Every score is analysed by the ARC, no matter how straightforward it may seem.Credit:Scott Barbour

Fifty-eight per cent of reviews confirm an umpire’s decision, such as a behind that was originally claimed as a mark by Matt Taberner in a crucial stage of Fremantle’s eventual loss to Sydney. This is separate to the 11 per cent of decisions that revert to an umpire’s call.

Within three years, football’s video review system has become a highly sophisticated and accurate tool that is ultimately helping the game in more ways than first thought. And on Saturday night, The Age was on hand to see exactly how it works.

Located in a dark, windowless space in Marvel Stadium that feels more like the security centre at a casino, the AFL Review Centre is split into three sections, which all have their own room.

This is the epicentre of the review centre, where every single score is analysed. Whether it’s a straightforward set shot that splits the middle, or a controversial snap where a player has claimed he touched it, the reviewers are watching.

On Saturday night, Carlton and Geelong were clashing at the MCG, while Fremantle were hosting Sydney in Perth. Each game has a team of three on watch: a controller, who operates the camera angles and the Hawk-Eye technology; an analyst, who calls out what they see; and a supervisor. 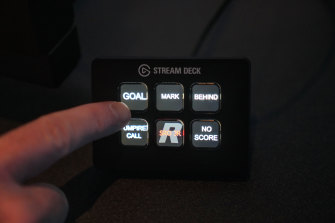 Decision on the screen: The message goes from the ARC to the ground.Credit:Scott Barbour

On Saturday night, the two supervisors were Wenn and Chris Appleton, a former AFL goal umpire. Between them, they’ve officiated more than 600 games. It’s their voices you can hear at the ground when they’re delivering a score review outcome.

Next door is the AFL’s hub for umpires. With 18 large, flat-screen televisions of its own, in this room each game is analysed by a team of three, including a coach, who calls out every decision and non-decision.

Every game is coded, meaning umpires can come into the review centre on Tuesdays and review their own performance, just like a player.

“It’s like a football club would operate, it’s a great learning aid for the umpires,” says Lisa Lawry, the new boss of umpiring who is only in her second week in the role. 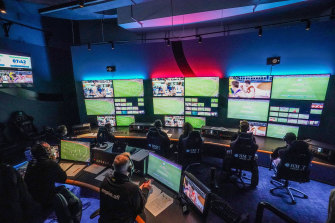 Stuart Wenn (back left) and Chris Appleton (back right) oversee the action in the ARC.Credit:Scott Barbour

Behind the score review centre is a room dedicated to two significant areas of the game. On one side, a team of two, armed with six screens, watches every game from six different angles with the sole intention of looking for incidents that may be reportable or fineable.

On the other side is another team of two, with six screens and two champion data monitors, looking for potential concussions. The team can see exactly what club doctors are looking at on the bench and be utilised as another set of eyes.

“You’d be amazed at how good the club doctors are at identifying incidents,” AFL analyst Tom Gastin says.

“It’s amazing to have this facility if something is missed, but it’s quite extraordinary how little it’s required. We are just here as a support.”

Do you see what I see?

The camera angles that the review centre has access to are contentious for the public. Does the AFL have access to secret angles that we don’t see on TV? The simple answer is no.

Aside from fixed cameras down the ground, and one on each goal post, the review centre receives only the camera angles that the broadcaster affords them in each game. At Optus Stadium for Fremantle v Sydney, Fox Footy had 11 cameras operating at any given time. For the marquee match at the MCG, free-to-air broadcaster Seven had 13.

If one camera happens to be searching for someone in the crowd at the time of a controversial incident, that’s one less angle the AFL has at its disposal.

Once an official review is taking place, the review centre controls exactly what viewers at home and at the ground can see. The broadcasters can only use the output being given to them by the review centre. It means there can be no confusion for fans.

More than one in three score reviews involve a ball that may or may not have been touched before it crosses the goal line. Trying to work out if a ball has been touched by looking for bent fingers or minuscule changes to the revolution of the ball are the toughest challenge, according to those inside the review centre.

“There are a couple of recidivists who claim they touch it when they haven’t … I won’t name them,” chuckles Wenn. “Sometimes they’ll genuinely think they’ve touched it … but in actual fact they’ve touched another player … it can happen in the heat of the battle.”

Another issue that footy fans complain about is the technology used during score reviews and video replays.

“We have the best technology available,” football boss Brad Scott says from inside the review centre. “Hopefully a lot of this stuff goes relatively unnoticed, but it’s a system where the umpires are still in control out on the ground and the club is still in control of all medical decisions on game day, but this function makes it a lot more efficient and minimises the risk of making a really poor decision.

“We are there as a backstop.”

“Camera technology seems to be changing weekly, so I think it will be crucial to avoid complacency and thinking we’ve got a perfect system. “The challenge of our game is that, as good as the tech is, you’re always going to have areas of grey.”