On Saturday, dual Brownlow medallist Nat Fyfe returns to the Dockers’ team for the first time since round 19 last season.

The skipper is fresh, and confident he has overcome the shoulder and back problems that left him unable to function at times during a rugged rehabilitation period that he admits humbled him. 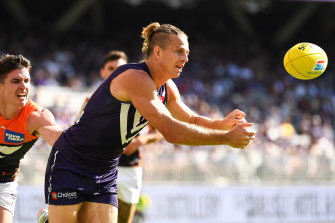 Those observing him as he prepares to return say he is more excited about playing AFL football than they have seen him for some time.

Yet, worry persists about the impact Fyfe’s return might have on a team that is humming along, having won nine of their first 12 matches under third-year coach Justin Longmuir despite fielding the third-least-experienced team in 2022.

Some of it is voiced among commentators and supporters intrigued by how much better – or worse, if they are a doomsayer – the Dockers will be when the three-time All-Australian joins the purple army’s front line against Hawthorn in Perth on Saturday. 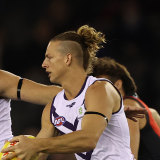 Nat Fyfe gets a kick against Essendon midway through last seasonCredit:Getty Images

However, speak to people inside the industry – such as assistant coaches and potential opponents – and they know a fit, focused Fyfe will only improve the Dockers, who have well and truly passed the time when, as one prominent West Australian journalist put it, Fremantle were the “One Nathan” football club.

“There would be some sort of reservation because they are going so well,” admitted former Collingwood assistant and Cats champion Garry Hocking, who coached alongside Longmuir at the Magpies in 2018.

“But it was only a couple of weeks ago that [Fremantle] lost two in a row. There is no doubt that they just have to squeeze him in as he is going to complement what is already there, you would hope.”

They have planned the Fyfe return as well as a club can amid the chaotic environment of a season. In discussions with Longmuir it became clear to Fyfe that the team could benefit most if he focused largely on playing a forward role while retaining the flexibility to pinch-hit in the midfield.

With veteran David Mundy, emerging star Andrew Brayshaw, partner-in-crime Caleb Serong and recycled surprise packet Will Brodie getting the job done under Sean Darcy in a balanced midfield, Fyfe’s return shaped as the icing on top rather than the key ingredient.

That thought inevitably challenged Fyfe, whose team’s fortunes have been so tied to his own performance in the midfield for all of his career, despite the Dockers winning 37 and losing 39 whenever he has missed since his debut in 2010.

But after he overcame a mentally flat spot that followed two shoulder surgeries and an infection, he launched into a pre-season with such vigour his body stopped working. The back problems that re-emerged earlier this year meant he could not do anything for about six weeks, and gradually he developed a new outlook.

As a keen surfer, Fyfe would have known the key to a good re-entry is coming off the bottom in a steady and controlled manner, so he reset himself and gradually built himself back, returning to the game through the WAFL.

He also watched enough of the Dockers to recognise he could improve the team’s forward line, with his marking power, brute strength and ability to demand opposition attention unique in the competition. And at the Dockers, former Sun Brodie has been a more than adequate replacement in the middle. 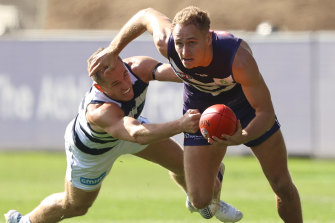 Former Sun Will Brodie has stepped into Nat Fyfe’s role and played wellCredit:Getty

The numbers back Fyfe and Longmuir’s instinct, with Fremantle sitting 14th for scores per inside 50 and, despite a spike in their scores from stoppages against the Brisbane Lions, they are much better at defending those situations than attacking from them.

By Monday night, as Fyfe joined Fox Footy’s On the Couch ahead of his return, his team-first attitude was clear.

“I’m very open to playing within a system that best suits the team and wherever we can identify my strengths adding to that mix,” Fyfe said.

That is music to the ears of one assistant coach at a club unlikely to play finals, as he says the big question the industry is pondering is: Can Fyfe leave his ego on the hook?

“It’s so powerful when a superstar accepts that ‘yeah, I understand it’s best for the team if I am up forward.’ He can have a massive impact on the psyche of the team,” the AFL assistant coach, who preferred to remain anonymous, said.

He thought the 29-year-old with great hands and leap carried the same attributes forward of centre as Richmond’s Dustin Martin and Geelong’s Patrick Dangerfield with former Magpie coach Nathan Buckley telling SEN those stars were the blueprint for Fyfe.

“Richmond have revolutionised the way you can use a player with those traits,” he said. 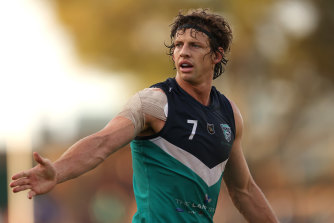 Nat Fyfe, playing for Peel Thunder in the WAFL.Credit:Getty Images

Like Dangerfield his kicking can be a weakness, particularly in front of goal where he managed 6.21 last season including 10 behinds in two horrible games at Perth Stadium. His accuracy before 2021 was, for a midfielder, a respectable 58 per cent, although he has kicked 8.15 in his 19 games at the MCG.

Other industry observers say there is no question Fyfe will welcome playing without a sense the team’s fortunes rest on his shoulders. They suspect the emergence of young teammates with talent will revitalise Fyfe, allowing him to play with more freedom to express his strengths rather than playing like one leg is tied to the Dockers’ anchor.

Hocking said Fyfe’s return would have taken up plenty of the Dockers’ time in match committee this week as they refined their thinking around how many minutes he played, decided on the balance between being forward and midfield time, how his presence impacts in those areas, what the other players need to get used to and managing their own expectations of what one of the modern greats can deliver.

“The rest of the team would be picked in five minutes,” Hocking said.

Fyfe has moved to temper expectations, saying it will take him a month at least to get back to being the type of player he hopes to be for the Dockers in 2022 as they mount a campaign to win the club’s first flag.

“[I am in a] good position to attack the back half of the year.”