It is a matter of time before Dan McKellar joins the Wallabies.

McKellar knows it, Rugby Australia know it and, from Scott Sio's comments on Sunday, the Brumbies dressing room knows it too. 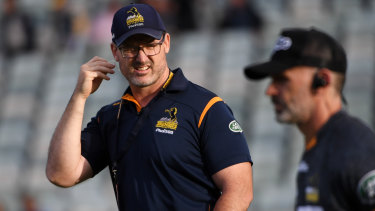 "Dan is such a great coach, it's easy to see why they'd ask him but his focus, as it always has been, is for the Brumbies and making sure this team is successful," Sio said.

"He's really hitting his straps as a coach and his ability to adjust to things is unrivalled at the moment. The team has been through a lot and with Dan leading the helm, he's given us a lot of confidence heading into each week.

"I have no doubt he has aspirations, as every coach does, to one day have that job. But it's up to him, I'm sure Dan is more than capable to do that whenever he decides."

The Herald’s revelation last week that McKellar was being wooed by Rugby Australia high performance supremo Scott Johnson and Wallabies coach Dave Rennie sparked furious debate about where Australia's top young coach should spend the next few years of his career.

"The Wallabies need an assistant coach and they raised it a few weeks back, and it would be an honour to be involved in the Australian set-up," he said on Monday.

"Coaches are no different to players in they want to coach at the highest level, and I have aspirations to do that and I'm sure it would be a great environment to work in.

"I'm really flattered to be involved in those conversations, but right now I'm focused on the Brumbies."

Make no mistake, McKellar is Rugby Australia's preferred candidate. It is a question of how willing Johnson and his boss Raelene Castle are to push the friendship with the Brumbies, who do not want to let him go.

And it is, of course, a question of what McKellar wants to do, which will come down to where he thinks he is best placed to further his development as a coach.

There are two schools of thought on that point. The first subscribes to the view that if McKellar harbours ambitions to be the next Wallabies coach then the best way to make that happen would be by winning a Super Rugby title with the Brumbies.

"Head coaching has a much more different skill set to a hands on assistant," former Fiji high performance general manager Geoff Webster commented on Twitter. "I’d suggest he’s getting the best HC [head coach] apprenticeship he can get right now."

It worked for Ewen McKenzie (won a title with the Reds in 2011, took over from Robbie Deans in 2013) and Michael Cheika (won a title in 2014, took over from McKenzie months later) and also for Deans (five titles with the Crusaders, and started with the Wallabies immediately after winning the fifth). Eddie Jones also took that path, winning a title with the Brumbies in 2001 before landing the Wallabies job later that year.

That's the roll call Brumbies boss Phil Thomson will cite in his discussions with his sought-after head coach, whom he recently re-signed until the end of the 2021 season.

What it hides is that both McKenzie and Deans worked as assistant coaches at Test level earlier in their careers, McKenzie under Rod Macqueen for two years and Deans under John Mitchell in 2002 and 2003.

Two stints that would have broadened both coaches' experiences and skill sets and given them exposure to international rugby with none of the pressure that comes with the big job.

Test and provincial coaches canvassed off the record by the Herald were unanimous in agreement that McKellar should join the Wallabies, for three main reasons.

The first was that Rennie's team offered the young Australian a world-class learning environment   and would help him further develop the tactical application of his technical skills set as a forwards and head coach. In other words, McKellar would get better under Rennie.

The second was that from a Wallabies perspective, bringing in McKellar with a plan to develop him as a potential successor to Rennie would benefit Australian rugby. In the same way that Steve Hansen apprenticed under Sir Graham Henry and new All Blacks coach Ian Foster apprenticed under Hansen.

"The continuity that gives your Wallabies program is so important, rather than losing the intellectual property of one group and bringing in four new blokes to make the same mistakes all over again," one coach said.

The third reason was a reminder of the power of the Wallabies jersey, a power to which McKellar is not immune. "When your country calls," a former Wallabies coach said. "No choice."

Unless there is a choice. Cheika credited Australia's success at the 2015 World Cup with the dual coaching scenario he took on that year. Will McKellar, the Brumbies and RA be open to that? Time will tell.

Tags: could, dilemma:, ev, McKellar, THE
You may also like
Latest Posts