Collingwood trailed the bottom team, North Melbourne, by 26 points at three-quarter-time and had been “playing like busteds”, as a pithy Scott Pendlebury put it, when Craig McRae came down to the huddle.

The Magpies had already honed their escape routine in the previous six victories. Skipper Pendlebury was braced for McRae to rip into the players for the first time in his remarkable first season as coach.

“I was like ‘we’re about to cop it,’ “Pendlebury recalled of that round-17 huddle. “I’ll finally see him go off.”

But “going off” isn’t the McRae way. 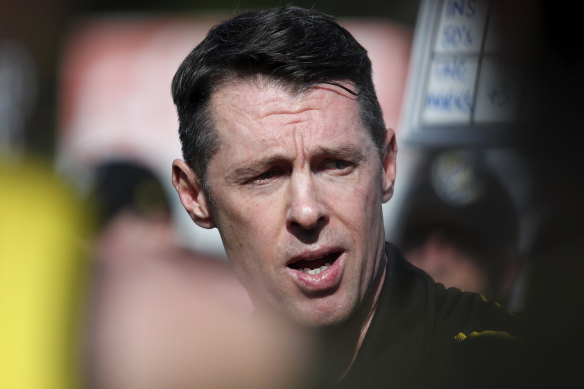 “He spoke pretty much like ‘get rid of the first three quarters. We’re going to win this game and this is how we win it’,” said Pendlebury. “Probably the first time I thought it wasn’t like traditional football coaching, where it’s like ‘we’re playing crap, we’re about to get a spray’.”

McRae didn’t lose it, and the Pies didn’t lose, either, overcoming North by seven points in yet another of their cliffhanger victories decided deep in time-on.

The McRae way is to emphasise what’s next, rather than focusing on what’s been. “He doesn’t dwell on mistakes,” Pendlebury explained. “If there’s stuff we’re not doing right in games, he’ll correct us, but it’s always with a positive outlook.”

In only 23 matches as senior coach of the game’s most visible club, understated McRae has taken the Magpies far further than they themselves expected. And he has achieved this on the back of a coaching philosophy that can be summarised thus: keep looking ahead.

The McRae way marries a positive psychology with a game style that is also about moving (the footy) forward, not retreating, in safety – a method he learned at Richmond, where he was VFL and an assistant coach from 2016 and for the 2019 VFL premiership. It is a sparse game plan, that prioritises taking territory – going straight at the goal – instead of holding possession, as some teams prefer.

This style has worked for a Collingwood team that had lost their sense of adventure in Nathan Buckley’s last two years, as the Pies played with excessive caution, almost in fear of the mistakes that McRae has encouraged them to forget. The new coach uses the analogy of a windscreen wiper to explain how they deal with error.

Pendlebury remembered how at half-time in the Queen’s Birthday game, when they had booted 3.8 (to Melbourne’s 5.4), the coach had told the players: “This is boring, we’re playing boring. We’re not a boring side.” The Pies went on to boot nine goals in the second half to win by 26 points.

This affirmative psychology, in Collingwood minds, has bred belief – the word that McRae’s offsider and former teammate Justin Leppitsch reckoned summed up this team’s knack for winning games that they shouldn’t.

It is a measure of McRae’s impact on Collingwood and the competition that a few of his coaching tenets, or McRae-isms, have gained currency. One is the windscreen metaphor. Then, there’s “water what you want to grow” – another positive-thinking mantra and the most distinctive aphorism, which he deployed after Collingwood’s six-point loss to Geelong when they slumped to the turf: “Act like winners.”

If McRae has clearly taken elements of the charge-forward style and mindset of Richmond post-2017, his “water what you grow” approach pre-dates the Tigers. 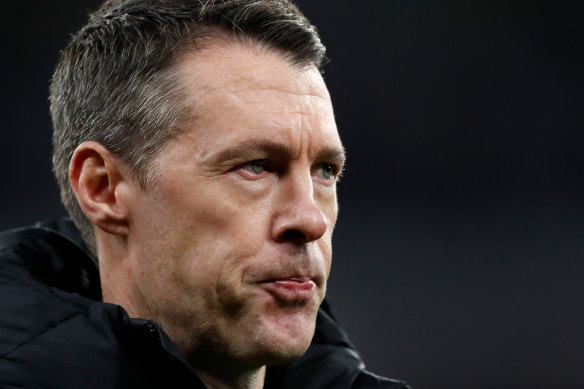 McRae told The Age on Thursday that he had read the influential bestseller on positive thinking by Carol Dweck, Mindset, in his very first stint at Collingwood.

“She’s an influence – when I was here (Collingwood) a long time ago,” he said. “It’s something I look into. But a lot of it (his philosophy) is life experience, to be honest.

“Growth mindset is something I strongly believe in – it’s the ability to think that tomorrow’s your best day.”

McRae, an ex-school teacher from South Australia and a late starter as AFL player, wasn’t clear on whom, from outside of footy, had influenced his forward-looking position: “Maybe my mum, I don’t know. I’m just a positive person. Is it environmental learning? I’m not sure. My dad says his blood type’s B positive.”

McRae had presented the concept of “acting like winners” to the panel – headed by football boss Graham Wright and football director on the board, Paul Licuria – that selected him from a field that included subsequent senior coaches Michael Voss and Adam Kingsley.

One of the coach-search panel, ex-Collingwood board member (and briefly co-president after Eddie McGuire) Peter Murphy recalled McRae saying to them: “Every day I wake up and I practise winning behaviours.” Murphy noted that this was presented without any arrogance.

“He often talked about treating them (players) as adults,” Murphy said of McRae’s pitch to the Magpies’ panel, which involved multiple interviews and extensive background checks – the Pies also having current and former staffers who knew McRae (Pendlebury included) from his five years at the club. “Give them the freedom to express themselves.”

“We’ve definitely become the group we are today because of the way he coaches.”

As Murphy and others within the club attest, McRae was chosen as a coach who fitted Collingwood’s need for a developer/teacher of younger players (as a team in transition with a strong senior core) and had been marinated in exceptional coaching waters, having played, worked or coached under Leigh Matthews (McRae a member of the 2001-2003 flag teams), Damien Hardwick, Robert Walls, Mick Malthouse and Nathan Buckley (McRae was head of development at Collingwood from 2011 to 2015), Alastair Clarkson (2021) and even Craig Bellamy at the Melbourne Storm.

McRae, usually known as “Fly” (after Michael J Fox’s character Marty McFly in Back to the Future), was renowned as a jokester and popular teammate with the Lethal Lions, where he would organise end-of-season “Mad Mondays”.

If there was a doubt about him taking over at Collingwood, some who knew him wondered how he would handle the hype of this particular position – an iron throne of sorts – at the most scrutinised of clubs, given he had relatively scant media experience compared with media-seasoned Buckley and Voss.

McRae has performed well in his media appearances, seemingly by presenting as himself. “The only way through this,” he recalled thinking after Collingwood was drubbed by the Bulldogs, “is being yourself and being positive.” McRae does, however, push the players by holding them to their own words and standards. “This group, in particular, have stepped in and I’ve just held them to account for things they say.”

The hiring of Craig McRae was un-Collingwood-like in that it came from a genuinely open and thorough process that canvassed many candidates, instead of head-hunting a brand-name coach or ex-champion such as Buckley. McRae’s low profile ran counter to Collingwood’s past appointments, even if he had pedigree nonpareil and a background at the club.

Pendlebury noted how McRae trusted his assistants – as evident in that he coached from the bench, not the box, where strategy is more easily understood. “So he’s obviously got implicit trust in the guys.” Pendlebury also felt that Collingwood, arguably devoid of “big personalties” in 2022 under McRae, had taken on a more low-key vibe as a whole club.

“I feel like we’ve got a bit of a low-key profile about us now. I don’t know, maybe … we don’t have big personalities and I don’t know if that’s right or wrong.”

In McRae’s first season, Collingwood’s experiment with a lower-key – and look-ahead – approach seems to be in tune.