AFL superstars Lance Franklin, Dustin Martin and Nat Fyfe head the list of six players who managed to earn more than $1 million in the COVID-hit 2021 season.

Sydney’s Franklin – who needs just five more goals to become the sixth player in the game’s history to kick 1000 goals in their career – and Richmond’s Martin, a three-time Norm Smith medallist, are among the three players in the competition who earned more than $1.2 million in 2021.

When Franklin signed his mega nine-year deal to join the Swans after two premierships with Hawthorn, the champion goalkicker was set to earn $1.5 million in 2021 as his deal was heavily back-ended. However, that would have impacted slightly on the exact figure he received. 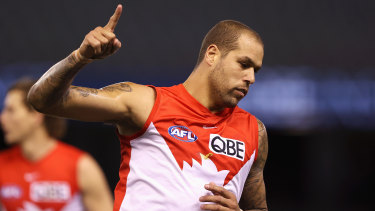 Lance Franklin is on the verge of the 1000-goal milestone.Credit:Getty Images

Martin was in the fourth season of his seven-year deal in 2021 with the Tiger superstar believed to be earning $9 million over the length of his career.

Dockers skipper Fyfe has completed three seasons of a six-year deal that began in 2018 as the club was beginning to rebuild, while his cross-town rival, Eagles defender Jeremy McGovern, was also a potential million dollar earner, according to industry sources.

The figures were part of an AFL release which revealed that AFL clubs paid $233.9 million in player payments, in 2021 with the average player salary for a listed player reaching $372, 224. There were 655 listed players across the competition.

Carlton’s Patrick Cripps is the highest paid Blue with his pay packet potentially reaching $1 million in 2021 as clubs look to manage their salary cap, so they have flexibility when key youngsters reach their peak.

Collingwood’s Brodie Grundy was in the first year of his seven-year deal with the Magpies that is expected to earn him around $900,000 per season. However, players in that category can sometimes earn $1 million a season to assist clubs to manage their salary cap.

Geelong’s Jeremy Cameron and Patrick Dangerfield are understood to be below the $1 million mark with other key players Tom Hawkins, Joel Selwood and Tom Stewart in the line-up.