Is it possible to admire a human quality without endorsing the actions that flow from it?

When watching the NRL’s and AFL’s parallel experiments in spectator-free sport, it’s hard not to feel a sneaking admiration for their sheer willpower, their stubborn refusal to cede control of their own events. Their spirited response brought to mind the Danish King Cnut the Great, who ordered the tide to stop rising before it touched his feet. The NRL and AFL have ordered this virus to heel. 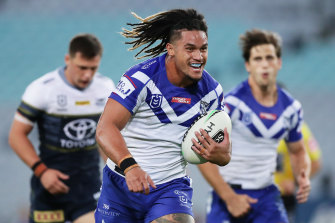 Renouf To’omaga of the Bulldogs runs away to score a try during the round 2 NRL match between Canterbury and North Queensland.Credit:Getty Images

Their determination reflects much of what we can admire in sportspeople: a self-belief that verges on recklessness, a defiance that might show tremendous resolve or just be a childish tantrum, and we won’t know which it is until after it has happened. The leagues, like the players, have decided to back themselves.

The equation being tested by the experiment is this. Does football minus a sense of occasion equal "content"? That is what the NRL and AFL are about: satisfying their obligations to their broadcasters, providing content, and thereby earning their income. Is the result content, or discontent?

I began by watching the Bulldogs and the Cowboys at the Olympic Stadium, a cavernous empty oval. (Imagine how much more awesome it will be when it’s a cavernous empty rectangle! With a digital "curtain" to disguise the empty seats!) The cynical would ask what difference it made shutting the spectators out of Bulldogs v Cowboys. The NRL could have opened the gates and still had more than ample space for social distancing. 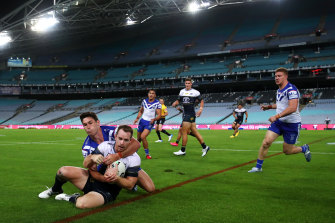 But there is a difference between low crowds and no crowds. A normal Bulldogs-Cowboys fixture might have been John Cage’s 4’33”, a provocative silence. Thursday night’s fixture was John Cage not being allowed in the theatre. The atmosphere was so lacking that I had my back turned, doing the washing up, when the first two tries were scored, and no noise from the TV caused me to turn around.

Are we unable to fully enjoy something unless we see other people enjoying it too? It’s a question that had struck me while watching Shaun Micallef’s Mad As Hell the night before the football. Micallef produced his usual comic genius without a studio audience. It was unnerving. It wasn’t that he wasn’t funny. It was that, with nobody else laughing, it was impossible to laugh along. You could smile but not laugh, appreciate it but not quite enjoy it. When you are used to seeing and hearing crowds, full enjoyment is, for want of a better word, infectious.

Maybe I found the NRL so hard to engage with because I was neutral, even indifferent, about who won. I switched to the AFL, where my team was playing.

The AFL’s show was different. This was game one, round one, Tigers versus Blues, and normally 80,000 people would have been in the Melbourne Cricket Ground. In commentary, it sounded like Eddie McGuire and James Brayshaw had agreed to take on 40,000 each. They proceeded to scream the season into being. When the Tigers kicked the first goal, Bruce McAvaney said, "We’re getting used to it!" 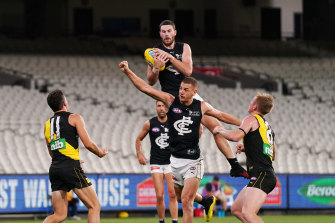 "It’d be better than the music they’re using," says my glum son, for whom the try-announcing musical bursts over the public address are top of a list of complaints. He thinks the speakers should be producing canned cheering, like canned laughter, to elevate the mood. "I don’t know if it’s more depressing watching this," glum son says, "or no NRL at all."

At the end of the game, Valentine Holmes admits: "It’s pretty hard to get up in front of absolutely no-one… I could definitely hear myself yelling at everyone." Welcome to my world, Val, welcome to my world.

When I switch back to the AFL, wife and son have both gone to bed. I’m in for the long haul, or, as the AFL would have it, the truncated 17-round, 15-minutes-per-quarter haul. That guy is still screaming. Forgetting himself for a moment, James Brayshaw describes the crowd as "very, very sparse". The Tigers win, but it feels as hollow as the G. My daughter walks past and says, "Oh my god, it’s so depressing." And she’s not even a fan of the all too appropriately named Blues.

When Todd Greenberg and Gillon McLachlan said their leagues' fans were desperate to see games, they didn’t just mean the leagues were desperate to get their broadcast payments. People are desperate. It’s true. And to feed their appetite is a good thing. But are they desperate to see this? Crowd-free football, even ameliorated by television, is a sterile product. Pretty much all sterile is good sterile at the moment, but this was ambiguous sterile. Lying beneath it is a looming sense that none of it will have meaning anyway. These were only a show of rage against the dying of this season’s light. I was pleased to be watching something, but at another level I was desperate to see it come to an end.

Despite myself, I can’t help admiring the leagues’ and the players’ determination in wanting to bend reality to their will. And yet the story of King Cnut is usually misinterpreted. His purpose, in standing before the incoming waters, was to show that not even he, the greatest king in the north, could force the tide to obey his will. He was staging a demonstration to rebuke his flattering courtiers, to show them that he was only human.

And so, in case anyone forgets, are these footballers and their competitions.

Tags: AFL's, and, Cnut, King, Mo, NRL, THE
You may also like
Latest Posts