Brad Fittler thought it was a joke at first.

But when his larger-than-life winger Josh Addo-Carr decided to race against some young Indigenous kids in suburban Townsville on Monday afternoon, the Blues coach could only cover his eyes and hope for the best. 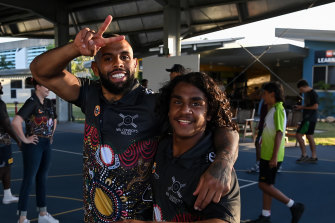 Josh Addo-Carr took time out on Monday for a visit to Cowboys House.Credit:Grant Trouville/NRL Photos

Cowboys House was started in 2017 and now accommodates 102 Indigenous children from remote Queensland communities so they can attend the various schools in the city.

The North Queensland club had run various community programs over the years, and when they realised the disturbing number of Indigenous kids dropping out of school, decided to come up with a concept that would change all that.

Backed by the Queensland and Federal Government, as well as North Queensland and the NRL, Cowboys House has now allowed the kids to not only receive an education, but break the cycle of drugs and alcohol which remains such a huge problem in so many of their communities.

When Cowboys director and Blues staffer Peter Parr asked the Indigenous trio and Fittler if they were keen to visit the kids while in camp, they jumped at the chance. 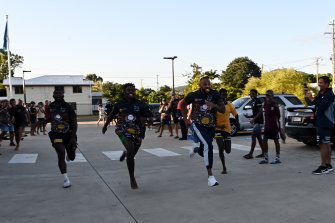 The reaction was immense and deafening as the players played some basketball, posed for photos and toured the facilities for the young Queenslanders who will now have a soft spot for the Blues.

The Blues did not want to advertise the trip, but did not object to the Herald joining the special visit.

“This is why we play footy,” Mitchell told the Herald.

“The reaction of the kids, we’re giving them hope. They’ve come down here for an opportunity and away from their communities where they can’t get that opportunity. 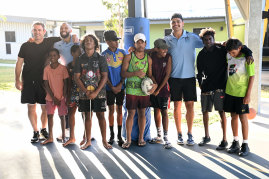 “It’s unbelievable how they’ve got this set-up. I’m blessed to see this myself. I’ve got goosebumps just being here. There’s a great energy.

“The government and Cowboys should be really proud of what they have done here. To see all the Queenslanders, I think we’ve turned a few of them into NSW fans for the night, which is a mad thing.”

Addo-Carr, who maintained he never broke out of first gear in his 50m race – only for Mitchell to keep telling him “you got trotted” – said afterwards: “Look how happy these kids are. I know how hard it is moving away from home without family. They should have more of these in Sydney. As soon as ‘Parry’ [Parr] mentioned this to us last week, we all said ‘yes’ straight away.”

Fittler received a letter last week from someone who pointed out Addo-Carr had conducted several visits to Indigenous communities in the past month, but does not publicise the trips.

“Look at the kids and the way they’re interacting and how positive they are. It’s like a big family here.”

Fittler has educated himself on Indigenous culture over the years during his annual Hogs motorcycle rides through various NSW regional towns.

Cowboys House general manager Rochelle Jones said it was Wighton who proved one of the most popular players, despite the mega profiles of Addo-Carr and Mitchell, because he had visited their centre at the start of the year during the Indigenous All Stars game.

Jones said the children, who came from as far as Eidsvold to the south and the Torres Strait Islands to the north, were driven back to their communities at the end of each term.

“And if it appears there have been struggles in those communities, we’ll send people to run programs to help the kids when they come back,” Jones said.

Addo-Carr will forever be remembered as the fastest.

Tags: bra, Origin-eve, race, Sprint, THE
You may also like
Latest Posts