On a team trek through Kakadu National Park back in 2012, a group of Melbourne players winding their way up a rocky track heard a commotion in the scrub.

As they braced themselves for an animal to emerge, Jack Viney appeared, unshaken after bush-bashing his way up the hill in a straight line to catch up with the group. 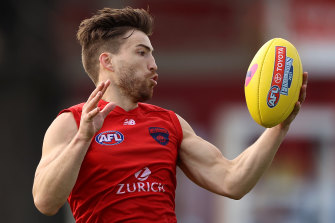 Given he had signed with the club as a father-son recruit aged 16 and played with their VFL affiliate during that season, the Demons already knew they had a player who was unwilling to deviate.

But that moment confirmed it, signifying the force of nature he would become at Melbourne, despite the uneven path he took at the football club over the next decade.

Now his team is favoured to go into the grand final, one tough win away from the chance he has wanted Melbourne to have since he decided to follow Todd’s footsteps when he signed on in 2010.

“The team is definitely performing the best it has since I have been at the football club,” Viney said.

“It’s a completely different beast when you get to finals. We have a big challenge in front of us in Geelong.”

He had his jaw broken wearing Demons colours before he was even drafted, when veteran Geelong speedster David Wojcinski ran through him in a curtain-raiser in 2012.

After his AFL debut in 2013 became a thrashing from Port Adelaide, he was asked to address the group to remind them what playing for the jumper meant. 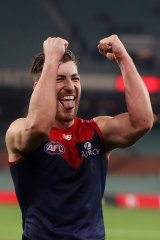 Although that jumper was red and blue, it was soon clear to everyone that Viney saw football in black and white.

He wanted to succeed through hard work and God help anyone he thought did not share the same approach.

At a training session in Sandringham in the weeks leading into one pre-season, Viney admonished teammates who had turned up for a casual hit-out because the ball had hit the ground.

It was a small thing that showed he was not afraid of confrontation. But his coaches knew work would be needed to harness that inbuilt desire to drive standards. Otherwise, he would alienate those who wanted to follow a different path to success.

Those coaches could see Melbourne’s future in front of them as Viney joined forces with Nathan Jones to embark on what appeared, as Melbourne languished, to be a two-man band resisting opposition heat like baking paper.

In his first 49 games, Viney was on the winning team just 10 times.

By his ninth season, at the start of 2020, he was no longer captain as Max Gawn replaced him and Jones.

He was disappointed to lose the title, but he picked himself up, as he always does, and went again to arrive at the point he’s at now, aware the number of allies in his force have grown.

“I’m pretty content and pretty happy with my place among the team at the moment,” Viney said.

The journey has made Viney, still the vice-captain, somewhat of an elder statesman at just 27, married to his childhood sweetheart, Charlotte, who he says has been his greatest support throughout, and with a daughter, Mila.

They will move back into their renovated home in Hawthorn at season’s end to be reunited with his much-loved dog Sebastian, who has been spending time near Lancefield on the farm his parents Todd and Meagan potter around on.

Viney has a commerce degree – he majored in finance after nine years of slog – and he’s a keen gamer when downtime arrives.

“Trying to keep a balanced life is important,” Viney said.

That has helped as he battled body and mind earlier this season when foot problems re-emerged.

“The most recent injuries were the most frustrating,” Viney said.

“Over a period of time that frustration starts to build up and build up, and you start to lose patience.

“Those spin sessions and off-legs conditioning sessions were tough to endure at times this year. I love the competitiveness of AFL football. I love playing the actual sport so when you can’t get out there and train and do what you love it can get to you at times, but you just persist.

“I am out the other end of it now and the body is feeling good.”

He wasn’t afraid to access psychologists to assist him and leaned on club physiotherapists Dan James and Brenton Eggleston to help him up.

Viney is now a hardened footballer with a wise head on his shoulders, having evolved into the type of club-first man that coach Simon Goodwin adores, playing a game perfectly suited to the bash and crash of finals football.

As he focuses on Geelong he knows to take nothing for granted.

“It’s going to be an arm wrestle. It could come down to the last kick again.”

Tags: Jack, of, ragged, rise, THE, Viney
You may also like
Latest Posts