Morris confirmed he was hanging up his boots at a press conference at the SCG on Monday morning, which was attended by the squad and his family. 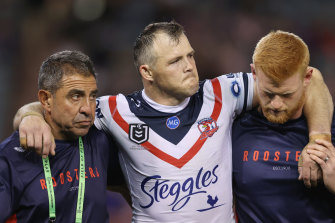 Brett Morris hobbles off the field during a game against the Knights last month.Credit:Getty

He said he hoped to move into a coaching role at the club.

“This is the right time,” he said. “The playing part has come to an end. But hopefully, my journey in rugby league is not finished yet.”

Morris said he told the Roosters players on Monday morning his career was over after meeting with coach Trent Robinson 10 days ago.

“I probably knew right there and then that was probably going to be the last time I stepped on the field as a player.”

Tags: Brett, Morris, right, THE, time
You may also like
Latest Posts