The NRL plans to add 12 matches to its regular season total, play more club games during the State of Origin period and reduce its reliance on the Broncos for prime-time television slots under secret modelling for a 17-team competition.

On the eve of the Australian Rugby League Commission’s decision whether to formally add a new Brisbane franchise for its 2023 season, the Herald has obtained details of how advanced the NRL is preparing for a new team after mapping out a competition structure.

Despite having to juggle a schedule which will cater for at least one bye every week, the NRL is poised to sign off on a number of highlights which will include:

The changes will be taken to broadcasters, including Nine Entertainment Co, the publisher of this masthead, as the NRL negotiates its new free-to-air television rights deal from 2023. Foxtel signed an extended agreement with the NRL during last year’s COVID-enforced shut down, securing the subscription rights through to 2027.

And the NRL is convinced it has found the ideal fixture for the introduction of a 17th franchise, which is a race in three between bid teams the Dolphins, Firehawks and Jets. 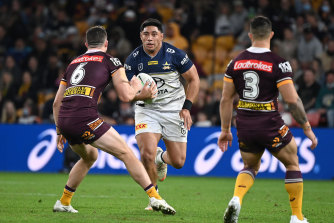 An expansion green light is expected after the grand final, the code’s first addition to the competition since the Titans in 2007, with Wayne Bennett expected to head up the new franchise.

A key plank of the NRL’s new schedule will be a revamp of the club competition during the middle of the season when Origin takes precedence, with more matches to be played on the weekend before the interstate contests.

While the NRL will try to provide a bye for each team during the period, not every club will have one when stars are forced to sit out before representing NSW or Queensland. And it’s expected there will be a full round of eight NRL matches before the third Origin game.

The addition of an extra 12 regular-season matches, taking the total to 204, will also be an NRL selling point to broadcasters, with the league set to cash in on more rivalries between the Queensland clubs. 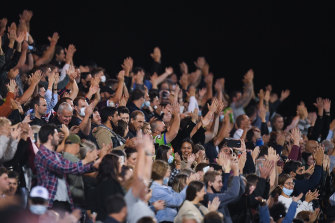 A 17th team will create the potential for four Queensland derbies.Credit:Getty

Head office was buoyed by massive television ratings for last week’s gripping semi-final between the Panthers and Eels, which they are convinced was helped by not only the nature of the contest, but the rivalry between the western Sydney giants.

But how much will an extra Brisbane team add to the value of the NRL’s television deal?

While critics of expansion have argued a 17-team competition won’t add an extra game per week to sell, the NRL will create a dozen more matches through the addition of a 26th round and won’t need to fracture its club competition as much in the middle of the season.

Origin-affected rounds have featured just four matches in previous years, with just one game daily from Thursday through to Sunday.

“During the two seasons of COVID the NRL’s numbers have not been as strong as they could have been, and that’s frankly because of the lack of competitiveness of the Broncos and Cowboys, but more importantly the Broncos,” Global Media and Sports principal Colin Smith said.

“Just adding another team doesn’t automatically mean crowd numbers and TV audiences will go up because there will be a live game, in essence, played in Brisbane every week. They’ve got to build that local identity, and it has to be competitive from day one.

“I’ve been a strong proponent of saying Brisbane needs another team. I can see them getting the financial model right, but it’s critical to make sure there’s enough depth to make that 17th team competitive.”

Tags: modelling, SECRET, show, that, THE
You may also like
Latest Posts