When Parramatta compiled a video to celebrate Brad Arthur’s 200th NRL game in charge last week, which included a montage of messages from his nearest and dearest, one was from Adam O’Brien.

However, only one of the two great mates will have something to celebrate when they face off in a sudden-death final. Arthur’s Eels and O’Brien’s Knights will clash on Sunday, with the result having a huge bearing on coaching careers that began together.

Arthur’s career began as captain-coach of Batemans Bay, where O’Brien became his assistant. They bonded so much that when Arthur found work at Cairns and then Melbourne, O’Brien went with him.

The pair have been close ever since. O’Brien is the godfather to Arthur’s daughter Charlotte and when tributes were sought to celebrate Arthur’s milestone, O’Brien’s message was among those from Eels players and officials.

Arthur and O’Brien didn’t want to speak about their relationship before Sunday’s match. However, those close to the duo know how much a win would mean to them. During their three years together coaching the Storm under-20s – a competition they won in their second year – Melbourne football boss Frank Ponissi watched two head-coaching careers being born.

“They are very similar, great, intense characters,” Ponissi said. “They’ve got an enormous work ethic, are passionate about their coaching and care about their players. 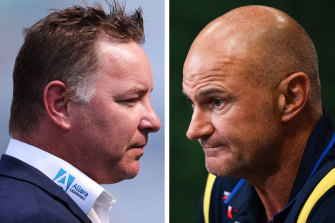 “They are close and their wives are very friendly as well. They have worked hard for their respective positions. When they left our club they continued as assistant coaches, they really did their apprenticeship.

“They certainly weren’t rushed into the head role; they’ve done their time, stayed patient and got their rewards as a head coach.

“They have done it the hard way, the traditional way, by jumping through that coaching apprenticeship. Full marks to them.

“Hopefully they have long careers at their respective clubs. Brad has already got 200 games up his sleeve, which is a fair achievement in such a short time. Hopefully, Adam is building something up there at the Knights.”

Eels forward Ryan Matterson said Arthur would love to get one over his mate, but said his focus would only be on preparing the team.

“I’m sure he would want to [beat him],” Matterson said.

The Eels have been dealt a blow after hooker Joey Lussick, who had filled in admirably for the injured Reed Mahoney, was ruled out due to a calf injury he sustained at training on Tuesday. Ray Stone will start at No.9, one of a raft of changes to the side that lost to Penrith last week.

The Knights have named David Klemmer on the bench despite a rib-cartilage injury. Fellow prop Daniel Saifiti has also been cleared to play.

Tags: 'They, are, Great, similar, Very
You may also like
Latest Posts

NFL players sound off as taunting penalties pile up in Week 2: ‘You don’t know if you can be happy’