The NRL minor premiers lost two players to first-half head knocks – Christian Welch and Brandon Smith – and put in their worst attacking performance in several seasons against a determined Penrith side in Saturday’s preliminary final, which led to a 10-6 loss.

Many fans expected the Storm, who won 19 games straight during the campaign, to face the Panthers in the grand final after they held the top two spots for most of 2021. But the Panthers lost in the opening week of the finals, moving them to the Storm’s side of the draw.

The Panthers will face Wayne Bennett’s South Sydney Rabbitohs in this Sunday’s grand final in Brisbane.

This off-season, the Storm will lose co-captain Dale Finucane to Cronulla, leading try-scorer Josh Addo-Carr (Canterbury) and utility back Nicho Hynes (Cronulla), who all played in State of Origin this past season.

“They will leave a big hole but it opens spots for other blokes to step up and do a job for us,” Storm coach Craig Bellamy said. 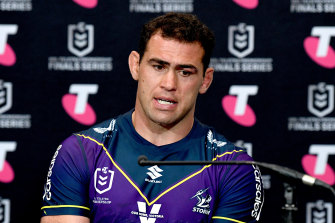 Finucane has been a stalwart at the Storm since his arrival at the start of 2015, playing in the 2017 and 2020 premierships, while Addo-Carr has been a fixture on the wing since 2017, scoring 23 tries this season.

Hynes has battled for minutes behind full-back Ryan Papenhuyzen but has shown his versatility off the bench as an energy player late in games. He will start in a key role with the Sharks next season.

Welch, who was unable to return after a head knock in the opening minutes, told the Storm’s media team his side was gutted to miss out on going back-to-back as premiers.

“Especially the guys who are leaving our club, Dale, Nicho and ‘Fox’ [Addo-Carr] have given so much to our club.

“I got a head knock early on and wasn’t fit enough to return. That was pretty shattering.”

Finucane has started at lock and the likes of Tui Kamikamica, Nelson Asofa-Solomona or Brandon Smith could fill that role next season, but his leadership and durability will be harder to replace.

Jesse Bromwich could become sole captain or one of several emerging leaders such as Welch, Kenny Bromwich or Cameron Munster could take Finucane’s place.

“Dale has taught a lot of young guys how they should prepare and we haven’t had a better competitor either,” Bellamy said post-game.

“You want to be a professional, you go and watch Dale Finucane and he’ll show you how to do it properly.”

Storm hooker Harry Grant will also likely miss the opening game next season after being cited by the match review for a crusher tackle on Saturday. He can miss one game if he takes an early plea or two if guilty at the tribunal.

The Storm could revert to having four forwards on the bench next season if another utility back doesn’t emerge to fill Hynes’ spot in pre-season training.

Tags: 'They, a, Big, hole’:, leave, Shatt
You may also like
Latest Posts