Canterbury's new chairman John Khoury insists club officials have been in constant contact with incoming coach Trent Barrett, assuring him the boardroom rowing will have "no impact" when he arrives at the club.

Khoury – one of four remaining members of the football club board after Lynne Anderson, John Ballesty and Paul Dunn quit on Wednesday in the face of a coup from sponsors and voting members – was confirmed as Canterbury's top dog on Friday. 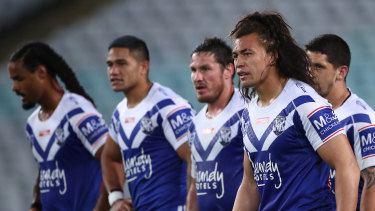 The Bulldogs narrowly avoided the wooden spoon this season.Credit:Getty

"He's very excited about coming to the Bulldogs when his commitments with Penrith finish, just as we are, and we hope he can bring some of that magic with him to the Bulldogs."

Barrett has regularly said he remains committed to the Bulldogs, who signed the former Manly coach to a three-year deal after parting ways with Dean Pay this year.

The Bulldogs missed out on one of their primary recruitment targets when Charlie Staines, who has scored six tries in two NRL games, re-signed with Penrith this week. The club still has a number of roster spots available and will escalate its pursuit of Staines' Panthers teammate, Matt Burton.

The club is also speaking to candidates to fill the three board vacancies to serve alongside Joe Thomas, Adrian Turner and Peter Mortimer. Thomas has been named deputy chairman.

"There's really an opportunity now to get behind the board, we will listen to you and we will meet you despite COVID," Khoury said. "If we can't have the four planned member forums a year, we will work it out if we can do it in members of 50 or 100 – or even online.

"A lot of the membership know I'm easily accessible. The team I'm with are committed to that as well.

"The board is really grateful to Lynne, John and Paul for their contributions, and their decision to stand down was to avoid an EGM and destabilise the club.

"Each of them had a tremendous passion for the club and contributed a lot while on the board. It was a selfless decision that was made to give the club some clean air to move forward with a new coaching staff coming on board."

Khoury ran as part of Anderson's ticket at the volatile 2018 elections, which brought longtime chairman Ray Dib's tenure to an end.

He has been an influential figure in rejuvenating the Bulldogs' junior league pathways, and insisted he will remain involved with the grassroots system, in which he has two children playing.

"It's very much part of my upbringing and we've worked very hard on our junior league numbers," Khoury said. "We have five Australian Schoolboys in our pathways from junior league and we've made finals in Harold Matts and SG Ball.

"I want it to be remembered I came in as a Canterbury man from the membership and if I leave, I leave respected and remain active in the community and Canterbury football club."

Tags: Bull, club, has, This, to, Unite
You may also like
Latest Posts