Like the best games of an excellent final month, this grand final provided both the For and Against cases with regard to the National Rugby League’s breathless push to change its rules to accelerate the pace of play.

Even before it started, there was something hectic about this encounter. Johnathan Thurston’s acknowledgement of country was cut short by the opening bars of “Advance Australia Fair”. The kickoff appeared to take place a minute before the advertised time. It had an air of “let’s get this done before the Queensland Government can lock the place down.”

The tempo of the game was likewise on fast-forward, with rapid ball movement and some play in the opening exchanges that was as ragged as it was rugged. Penrith dominated until a prop forward who looks like a professor (Souths’ Mark Nicholls) stole the ball from a prop forward with the name like one (James Fisher-Harris.) Souths’ Dane Gagai went off after a head knock. The Panthers launched pulse after pulse of attack until, almost inevitably, Jarome Luai injected Matt Burton through an open vein in the Rabbits’ right-side defence.

Speed kills, but first it tires. The TV commentators were putting some wrong names out on the field, and who could blame them? There were some weary players out there too. Souths’ Cody Walker ran through four of them to score the type of try you’d expect in the last minutes of a rugby league game, only we were still a quarter of the way in. By half-time, both teams dragged themselves off like their season was over. News flash: they still had forty minutes to go in tropical humidity. 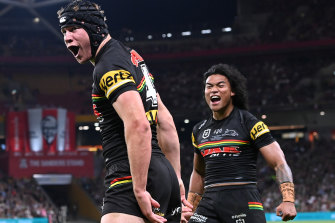 Matt Burton is over-joyed to score the first try of the grand final, as teammate Brian To’o celebrates with him.Credit:Getty

How to assess the match at this point? Penrith were supposed to have played the “real” grand final last week when they beat minor premiers the Melbourne Storm, but they had enjoyed the run of play, with more time in possession, more attacking opportunities, more oomph. The Rabbits were meant to be fresher, but looked weary and mildly disheartened. They seemed to be trailing by 20 points, but the scoreboard said they were only down by two, doing about as good a job in keeping the teams separated as the reduced ticket allocation was doing on the crowd.

So, final words. In the Souths’ changing room, it was Adam Reynolds’ last half-time for his boyhood club, the last of a million consecutive half-time talks from Wayne Bennett across 34 seasons, and the suspended Latrell Mitchell was wiping tears from his eyes in the team huddle.

But oh (in the words of Don Walker, first muttered by Jimmy Barnes, channelled for the grand final pre-match entertainment by Kate Miller-Heidke with the backing of Ian Moss), who needs that sentimental bullshit anyway? But oh, there was nothing second hand about this second half. Souths pressed, Penrith repelled.

The Panthers were cooked, but these Bunnies had been boiled. Nathan Cleary’s kicking game kept pinning Souths down with almost sadistic precision, but Reynolds’s penalty goal, the first score of the second half, levelled a match that had given so much but was still waiting for its signature moment.

That seemed to fall into the hands of Penrith’s Stephen Crichton, a real athlete’s athlete. It was South Sydney who were on the raid, Cody Walker orchestrating an attack on the left flank. Cody Walker is as good with putting teammates through gaps as Don Walker is at putting words on a song sheet. But this time, with just 13 minutes remaining, Crichton had read the score before. He committed himself, risking all, intercepted Walker’s pass and ran away to put the Panthers in front. 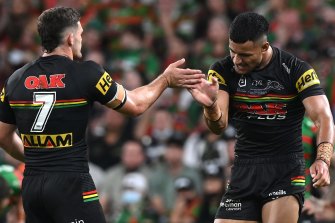 Nathan Cleary and Stephen Crichton celebrate a Panthers try by sharing some skin.Credit:Getty

It was an all-or-nothing play: if Crichton had missed, Souths would have scored. But that was not all, folks. Who does need that sentimental bullshit anyway? Walker, trying to write his own song, put his winger Alex Johnston over in the left corner. Reynolds’s sideline kick seemed to be curving between the posts, but a Penrith-loving breath of Brisbane air pushed it away.

Souths raided again in the final moments but first Walker passed over the sideline and Reynolds, in his final act for the Bunnies after two magnificent decades as a Souths junior and senior, missed a long-range field goal attempt.

Capping a season that seemed to go on for two years, so ended a grand final that had enough drama for two matches. This Penrith team, beaten in 2020, the most consistent team over the past two seasons, finally had the title they deserved, and both teams had given the game the 2021 finale it needed.

Tags: and, epic, ragged, Rug, tale, This
You may also like
Latest Posts