Joey Leilua has already proven Wests Tigers coach Michael Maguire wrong, now he wants to do the same to Ricky Stuart in his first game in Canberra since leaving the club in 2019.

There is a good chance the Canberra faithful will boo the slimmed-down centre on Sunday when he goes head-to-head with Curtis Scott, the man who was brought in to replace him. 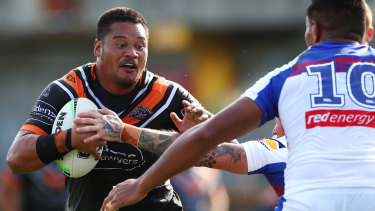 “I wanted to come back against Latrell that day; I knew we were going to play against the Roosters at some stage in the finals, so I wanted to see how I went against him.

“When he shut me down and said I wasn’t good enough I was shattered. He still picked me the next week and we went on to the grand final, but I wish I played Latrell in that game.

“Then with the Sunshine Coast, I’d just come back from my wedding and was relaxed. Stick wasn’t happy about my weight. I ended up being the only one not going away.

“When he did that, I thought, it’s time to explore somewhere else.” 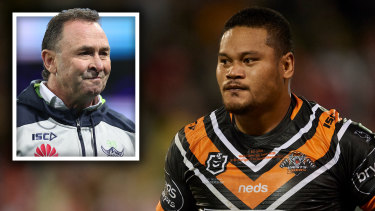 That somewhere else was the Tigers. Leilua arrived last year with big expectations, a big waistline and big pay packet, and, by his own admission, “didn’t do the club any favours”.

He struggled with the biosecurity restrictions that came with COVID-19, as did his wife, who returned home to Canberra with their children for family support. At one point Leilua was granted leave to head to the nation’s capital to see his loved ones who he had not seen for nearly three months.

It was a tough campaign for Leilua and came to a head when Maguire told him at the end of the season that he needed to improve or he wouldn’t be playing in 2021.

“‘Madge’ was blunt, there’s no bullshit with him,” Leilua said. “He said, ‘If you don’t come back in the right shape, you won’t play’.

“I was pretty heavy. I didn’t quite get to 120 kilograms, but I was close. Now I’m about 108 kilograms. I was the same weight at the start of 2019 before I did my neck. I was in great form at the start of the year and I thought I was in the Origin conversation.

“I’ve had a long pre-season – it felt like it went for a year – but I’m physically and mentally prepared.”

Tigers fans know Leilua and fellow centre James Roberts can blow games apart with raw talent, but the pair are just as well known for going missing during matches. Leilua knows that, and so do his Tigers teammates.

“It’s all in the head for BJ,” skipper James Tamou said. “We know how devastating he can be when he’s on. There have been plenty of times I’ve played against him and he’s single-handedly torn us apart, whether it be with a powerful run or offload or big hit. It’s scary when you’re on the other team. I’m glad I’m on his team.”

Tags: Me, motivate, still, Those, words
You may also like
Latest Posts