Fittler was full of praise for Queensland after their gritty 20-18 victory on Wednesday night, but alluded to a few “dodgy calls” during the post-match press conference.

Speaking to the Herald on Friday, Fittler stood by the incidents that caused him most concern in the third, 63rd and 79th minutes. The final incident saw Maroons skipper Daly Cherry-Evans baulking and then creep inside 10 metres as Latrell Mitchell tried to send the game into golden point with a shot at goal.

The Blues have often privately complained about Queensland slowing down the ruck – the Blues had 23 play-the-balls that were five seconds or more in Origin II – yet they were often on the wrong end of set restarts and penalties.

“They were all 50-50 decisions on Wednesday night, but we didn’t get any of them,” Fittler said.

“Gerard Sutton has done a great job, he’s now refereed the most State of Origins, but when you do that the role gets reviewed as much as the players’ and coaches’ role – you’re held to higher standards.

“There was that knock-on by Ponga [in the 63rd minute] which has always been a knock-on since I was five years old and started playing. 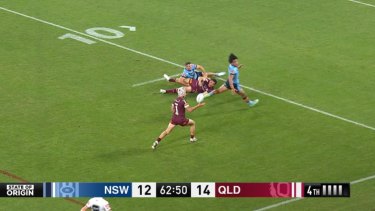 Kalyn Ponga bats the ball into the air, which Blues coach Brad Fittler says went forward. Queensland scored their final try on the next play.Credit:Channel Nine

“Latrell was pushed in the back [by Dane Gagai] when the ball was in the air [in the third minute], which led to Queensland’s first penalty goal. It should have been a penalty for us. 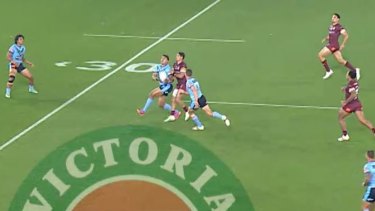 Latrell Mitchell is pushed in the back in the lead up to Queensland’s first points of the match, a penalty goal.Credit:Channel Nine

“And I was pretty disappointed with the manner they were inside the 10 metres as Latrell lined up the final kick of the game. 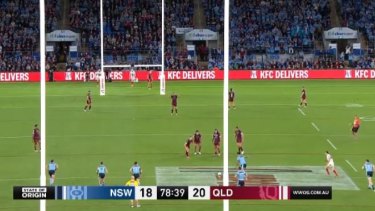 “We have the strongest referee in the competition, he should have had control of the Queensland players, otherwise give Latrell another kick. It was ridiculous.

“Once you go into depth with statistics and time of play-the-balls, and if you align it all with six-to-gos and ruck infringements and 10-metre penalties, it just feels like sometimes the game gets made tougher. You feel like you’re doing the right thing, but the game gets tougher.”

Fittler spoke with referees boss Jared Maxwell after the opening two games, but planned to delay a third phone call with the focus on now keeping the NRL competition going in Queensland and the COVID concerns in NSW and now Victoria.

“The beauty of winning the first two games is while you’re highly disappointed when you lose the third game, the next day you get over it and realise you’ve still won the series,” Fittler said. “There were parts of the game we didn’t do well. We had our chances, but we didn’t execute.”

Fittler defended Mitchell Moses who debuted in the No. 7 jersey for the injured Nathan Cleary.

“I was happy with Mitch, I thought his defence was great, and given he only had three training sessions with the team, we had opportunities down their end, and we would have liked to have done better, but it doesn’t all fall on his shoulders,” Fittler said.

Mitchell attempted a penalty goal from 50 metres out to force the game into extra time, which left some wondering if the same tactic would have been employed had Cleary been out on the field.

“It’s a hypothetical, and had Nathan been out there for five minutes prior, had a few shots at their line and came away with nothing, I could still live with the fact they took a goal kick to try and take it into extra time,” Fittler said.