Most nights, Michael Cheika only gets a few hours of sleep. Having three jobs – and a few side gigs – with contact points in four continents turns most of a 24-hour block into a work day.

Indeed, as much as the thought might terrify some, what the ex-Wallabies coach could do with right now is a second Michael Cheika.

Between the pair of them, the myriad duties of being the new Argentina Test rugby coach, the coach of the Lebanon rugby league team and the director of rugby at the NEC Green Rockets rugby franchise in Japan could be handled fine. Even on-camera punditry shifts would be a breeze.

But there is only one Michael Cheika and right now he’s burning the candle at three ends.

After deliberately spending time post-Wallabies exit in 2019 dipping only toes into coaching boxes, it is an explosion of full-time employment. And Cheika is loving the grind. 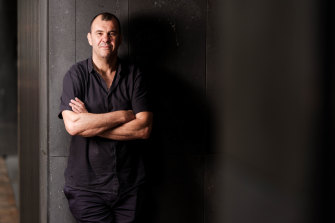 The 55-year-old had offers after leaving Rugby Australia in 2019 but held off, and instead sought foreign environments to “learn new things”.

Cheika served as a coaching aide for his good mate and Pumas coach Mario Ledesma, became a TV pundit for Stan Sport, started a podcast and also tapped into his other sporting love – rugby league – by working with Trent Robinson at the Roosters.

In late 2020, the allure of coaching in league and honouring his heritage saw Cheika jump at the chance coach Lebanon to the 2021 Rugby League World Cup, following in Brad Fittler’s footsteps. The pandemic postponed the World Cup for a year, however, complicating the picture given Cheika had also picked up a job as director of rugby for the Chiba-based Green Rockets. 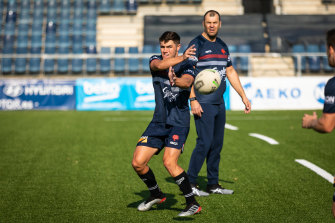 Then, when Ledesma decided to walk away from Argentina in February this year and the UAR came knocking – ‘would you coach the Pumas to the 2023 Rugby World Cup?’ – Cheika found himself with three jobs and just enough hours in the day.

And in coming weeks, things promise to start getting proper busy.

Having recently returned from Japan, where the Green Rockets successfully avoided Top League relegation, Cheika will coach his first games for both Lebanon and Argentina. The Cedars begin their road to October’s World Cup by taking on Malta at Belmore Sports Ground next Wednesday, and then, on July 2 in San Salvador, Cheika will coach the Pumas in the first match of a three-Test series against Scotland.

“It’s great, the diversity of them all and they’re all very different things,” Cheika says.

“They’re three totally different things. In Japan, it was a great experience for me because I have never really been in a team that has been challenged at the bottom of the table. We won our first game in three years this year, and we survived in first division, which wasn’t expected and a great result for us. 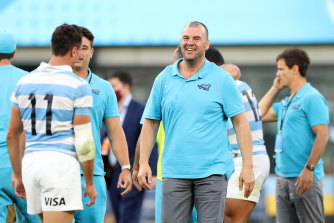 Michael Cheika coaching with the Pumas in 2020.Credit:Getty

“The Lebanon challenge is totally different. Trying to find the sponsors, organise a broadcaster, trying to get across the selections and the players across a number of competitions, there are guys I haven’t seen much of. And then just trying to create that atmosphere, but that is easy because I am very passionate about it.

“And then of course, Argentina, which I am very honoured to be doing. It is the highest level of the game.”

Cheika’s connection to Argentina began in 2012 when he was coaching Stade Francais and hired Ledesma as a forwards coach. The 84-Test hooker later joined Cheika at the Waratahs and Wallabies in 2015, and when Ledesma became Argentina coach in 2017, Cheika’s first stop after a five-year stint with the Wallabies was back alongside him as a Pumas coaching consultant in 2020.

It was all done in Australia, with The Rugby Championship based here, but Cheika admits it was still a strange experience.

“I won’t lie. When they went in for the first time to help out and they gave me the nice blue team kit, I had to put it on a little bit at a time, every day,” Cheika said. 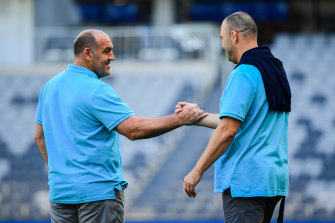 The exit of good friend Mario Ledesma opened the door for Cheika to become head coach of the Pumas.Credit:Stuart Walmsley

“I said to the boys ‘sorry, I can only wear this bit today and that bit tomorrow, because I need to get used to it’.“

The Pumas defied harsh COVID-19 impacts to famously beat the All Blacks in 2020 at Bankwest Stadium, but after several intense years, Ledesma decided to call time early this year.

“We had a few chats there, I just tried to encourage him not to, he’s done bloody hard work,” Cheika said.

”They’ve had such a difficult time, they’ve had so many obstacles put in front of them, obviously with the COVID-19 situation and then the cancellation of their team from Super Rugby. The movement of all their players to the northern hemisphere, everyone.”

Asked if he’d consider the role, Cheika jumped straight to the thorny end of the question – could he coach against the Wallabies? Could he do all in his power to bring defeat to a team he’d dedicated much of the last decade trying to turn into world champions?

“It was definitely difficult, no doubt about it,” Cheika says of his decision to accept.

As Wallabies coach, Cheika always said he couldn’t coach against Australia and even in mid-2020, he again told London’s The Times: “I’ve always felt that I couldn’t ever go back and coach against a team I’ve already coached. I feel that’s almost being a traitor.”

Cheika doesn’t hide from the statement – nor his reversal.

“When I said that, I meant it. When you are in that position, you have to believe you – and I say this in the right way – are there forever,” Cheika said.

“Not that you’ll be there forever but what you do will help what Dave (Rennie) is doing now, and what Dave does now will help someone later on. Maybe in the past in Australia it hasn’t been like that. One coach might have left it in a poorer place for the next. I always wanted that. It is something we have lacked and we are always so hard on our coaches, and there is always a sour taste left. I didn’t want that at all.

”There was an abrupt end with some of the management people, in that way, but definitely not with staff and players. And I think I have kept myself pretty well. I have been a consistent supporter, not getting in there trying to rip into chaps and ‘I was better than him’ and all that carry-on.

I think everyone is doing their best. And that’s how I saw it then.“When people write ‘he said he would never coach against Australia’, obviously they don’t understand what being in that role is. It is so important for the game, as a whole. You have to be all in, or what are you doing?” 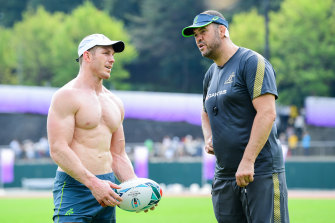 Cheika is not stressed about the loyalty question. He will remain a passionate supporter of his country but when the Wallabies play the Pumas, he’ll be with his team. And one won’t disqualify the other.

“I remember saying to Mario when we played Argentina, if you want to sing your anthem, go for it. That’s your country. I know where your loyalty is, footy-wise, don’t worry. I know who you want to win the game, you don’t have to worry about that stuff,” Cheika said.

“From my relationship with these fellas, and (UAR president) Gus Pichot and all the management and leaders, they know who I am. And they’ll be sure about who I want to win. There will be no doubts about loyalty.”

Will Cheika sing both anthems?

“I love Australia, it goes without saying. But I think out of respect you’ve got to probably stay silent and not let that emotion get away with you,” Cheika said. “Because at the end of the day, that’s got nothing to do with the game. It’s about how I prepare the team.”

Having coached against Argentina in a 2015 World Cup semi-final, and through infamous wins (Salta) and losses (Gold Coast), Cheika has no doubt the world’s No.8-ranked have the talent to progress from their long-held status as a team “on the cusp”.

“That’s where you have to move from, and it is about being more consistent in the way you play,” Cheika said. 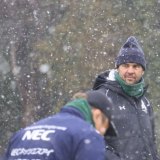 Cheika has plans about how he’ll make that happen, and continue the Pumas’ “evolution”, but the first big challenge is just pulling the squad together.

After the Jaguares were cut adrift during Super Rugby’s post-pandemic restructure, nearly all Argentinian players are again based in the northern hemisphere. Regulation 9 is used to select an entire squad for July Tests and the Rugby Championship windows, which should, in theory, also be their off-season.

Each Pumas player has a shareholder in the shape of a concerned club and stakeholder diplomacy is a vital, but time-consuming, activity.

“There is a huge amount of logistics that goes with this team, and I think sometimes the players have to deal with that, so I want to take all that away from them,” Cheika said. “Let me handle all that. Focus on enjoying the game.“

As is his wont, Cheika has already recruited from the left-field, in the shape of former Melbourne and South Sydney NRL player David Kidwell as his defence coach. 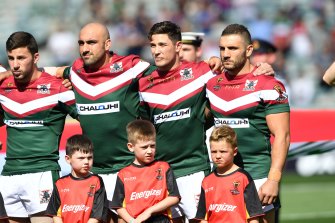 “He lives in our area in Clovelly and we got talking, watched a few games and one thing led to another,” Cheika said.

”I really just wanted to improve the tackling and start there. I am not asking David to take too big a role around organising defence and all that. Tackling, line speed, contact and a different voice and a new set of eyes on the game. He has been really good. He is looking forward to the experience and is bringing good energy.”

Cheika made it clear to the UAR he would not abandon his commitment to Lebanon for the RLWC in October and with their blessing, the coach will juggle both jobs. Assistant coaches in both teams will be empowered to run the show when clashes can’t be avoided.

The Cedars begin their campaign against New Zealand on October 16 and if things go as expected (via a Lebanon win over pool rivals Ireland), a World Cup quarter-final in Huddersfield against the Kangaroos on Friday, November 4 is a strong possibility.

The next day? A clash between Argentina and England at a sold-out Twickenham.

Duelling with Mal Meninga and Eddie Jones in a 24-hour period is uncharted coaching territory, but Cheika has worked up a map.

He just hasn’t slept in a while.

Watch every match of the July Test Series on the Home of Rugby, Stan Sport. Kicks off Saturday, July 2 with Wallabies v England, New Zealand v Ireland, South Africa v Wales and Argentina v Scotland. All streaming ad-free, live and on demand only on Stan Sport.