The Tigers thus face difficult calls on leaving players out – Cotchin and Martin, clearly, are certain selections – given their impressive 109-point mauling of West Coast and the successful positional changes they made.

But Dion Prestia is in some doubt, rated by the Tigers as a “reasonable chance” – probably 50-50 – to play against the Magpies. Prestia was subbed out of the Eagles game at three-quarter time due to a sore Achilles and soleus muscle tightness. 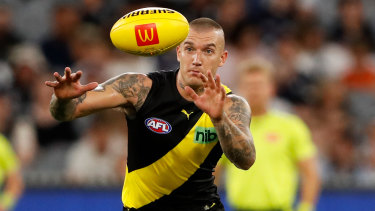 Dustin Martin is nearing an AFL return with Richmond.Credit:AFL Photos

Sydney Stack and Maurice Rioli jnr were successful inclusions for the West Coast game, for which Cotchin and Tarrant were rested, in part because the match involved a flight to Perth and the Tigers felt it was safer to leave the veteran pair out. 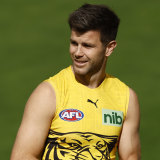 Pickett was unavailable for the Eagles game for personal reasons, but is expected also to be available for Collingwood, giving Damien Hardwick further options, even if he and his match committee opt not to risk Prestia.

The Tigers discovered another midfield option as a result of Cotchin’s absence, having moved Jayden Short from his customary position at half-back. Short had 31 disposals a whopping 792 metres gained – the most by any player – to be one of his team’s best.

Short’s position in defence was filled by Liam Baker, who was shifted from half-forward to defence.

Stack was relatively quiet against West Coast, with just five disposals, while Maurice Rioli impressed with three goals, in what admittedly was a game that lacked pressure and saw several Tigers have high numbers, Tom Lynch among them with 7.5.

Collingwood, meanwhile, has suggested via coach Craig McRae that they intend to retain last week’s debutant Aidan Begg and not bring back out of form American Mason Cox, who dominated in a one-sided VFL game. Ollie Henry booted seven goals in the VFL against Coburg and would clearly be under consideration for promotion in a match in which the Pies will be underdogs, despite their eighth position on the ladder and 4-3 record.