Collingwood free agent Jordan De Goey has expressed his desire to remain with the Magpies beyond this season if the club and his management find common ground in the back half of the season.

The 26-year-old has been in superb form in the first 11 rounds this year, polling nine coaches votes in a best on ground display against Carlton as the Magpies hung on in a thriller. 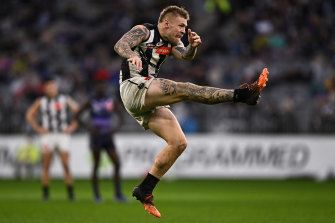 Jordan De Goey has been in superb form in 2022 but is yet to re-sign with the MagpiesCredit:AFL Photos

Playing as an explosive mid-forward, he has shown his skill in centre clearances and kicked 11.13 when drifting forward as a dangerous option.

In a rare public appearance at a Ringwood hotel on Wednesday night, De Goey told the crowd he was happy at Collingwood and his preference was to sort out a deal that would extend his time at the club.

“I want to work with Collingwood and get something sorted out,” De Goey said.

“I am happy where I am. There is always stuff you have to work out with the club. It’s a process over time, obviously. It doesn’t have to happen overnight.”

His public position means any club wanting to entice him away from the Magpies would need to make a significant offer to attract him to their club.

Collingwood said earlier this year they would not start meaningful talks with De Goey’s management until at least the middle of the season after the club stood him down until January following a nightclub incident in New York in October.

De Goey trained away from the club from October 31 until rejoining the program on January 21 following the conclusion of his legal matter in New York, where he pleaded guilty to a lesser charge of harassment and had all other charges dropped.

With that matter behind him, he has been a consistent performer under new coach Craig McRae, building on the consistent form he showed at the end of last season when he finished fourth in the club best and fairest.

He has enjoyed a lower profile in 2022, with several clubs already discussing the prospect of making a bid to secure De Goey as a restricted free agent, while commentators have questioned whether Collingwood should offer him a long-term deal.

The Magpies have already locked in key defender Darcy Moore until 2028 and ruckman Brodie Grundy until the end of 2027. Small forward Jamie Elliott is also a free agent coming out of contract.

De Goey rebuffed a mammoth offer from North Melbourne in 2018 to sign a two-year deal with the Magpies and then extended his career at the club by another two seasons in 2020.

It is unclear what length of tenure the Magpies would be prepared to offer De Goey, but as he is a restricted free agent they can match any offers from other clubs.