Three coaches have already been sacked this season, but the Gold Coast is adamant Justin Holbrook won’t be the next and will lead the embattled club next season.

Holbrook is under intense pressure after his side, which made the finals last year, slumped into a share of bottom spot on the ladder alongside Wests Tigers. The Titans have won just three games this year and face a resurgent Canberra on Saturday.

There has been intense speculation that Holbrook could join Trent Barrett, Michael Maguire and Nathan Brown in being moved on mid-season, but Titans co-owner Rebecca Frizell is adamant he will be given an opportunity to turn the club’s fortunes around.

“We are a club that is accountable for the decisions it makes. The head coach doesn’t make all the decisions, so it doesn’t seem reasonable that he pays with his career.

“If our performance doesn’t improve, then, of course, we will have a further think about that. But at the moment we have all made decisions about a strategy and a plan, and we all have to own those decisions. That’s what we’re doing.” 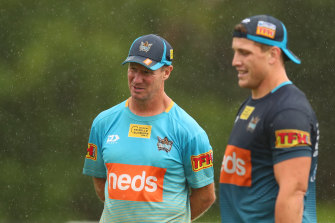 Titans coach Justin Holbrook has been backed to retain the job.Credit:Getty

The Titans have sacked assistant coach Jim Dymock and high-performance coach Klint Hoare as part of a shake-up, but Holbrook – who is signed until the end of 2024 – is safe for now.

“We will be making changes or have already made changes, which are pretty clear, in the football department about bringing in greater support and resources to ensure his success,” Frizell said.

“We will be a successful club. We had a bad season, we are fixing that and we will head into ’23 with a much stronger outfit than we have now.”

The Titans endured more controversy after fining and releasing captain Kevin Proctor for breaching NRL rules by posting a video of himself vaping midway through the loss to Canterbury. Frizell said the decision to part company was a line-in-the-sand moment.

“Exactly right, we have standards,” she said. “We’re very disappointed in our own performance this year, we expected to do a lot better than we did. We’ve learnt from that and we’re going to head into 2023 a much stronger and better outfit than we did this year.”