Youseph Dib’s memories of life in Lebanon are vague.

You would not expect a detailed account of his time there – it was only a short stint as a seven-year-old – but he does remember one thing clearly: taking a football.

“Everyone was definitely confused. It was nothing like anything they would’ve seen,” the 174-centimetre pressure forward told The Age. 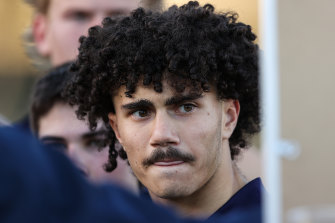 “I would’ve done or Auskick or something [before moving], so Dad bought me a footy and said, ‘bring this over.’ I remember kicking it around.”

Dib’s mother was born and raised in Lebanon, while his father moved to Melbourne from the Middle Eastern nation as an infant. His parents met in Lebanon, but married in Melbourne.

The Victorian-born Dib visited Lebanon regularly in his early childhood, but the family decided to move there permanently after he had completed two years of primary school in Melbourne.

“When I was about seven, my dad thought it would be a good idea to live there forever. He sold pretty much all he had here and invested in building a house over there. We went over and I did school and everything over there, but it didn’t go well,” Dib said.

The family had settled in Batroun, a seaside city in Lebanon’s north. He admired the coast and acknowledged the relaxed lifestyle, but despite remembering a football as the one piece of Melbourne he kept with him, it would also become the main thing he missed. In Batroun, there were no fabled lunchtime battles.

“In Australia … every lunchtime and recess you’re running around, whereas over there, I struggled to do anything,” Dib said. “I don’t remember the other kids doing any sports, there was no equipment or anything you could use.”

He also remembers watching the 2010 grand final from afar, as well as the confusion surrounding his and his father’s interest in the strange Australian game.

“Collingwood, St Kilda and the draw. I was over there when it happened, and it was such a big deal to my dad and myself. Everyone was just so confused with what was going on,” Dib said. 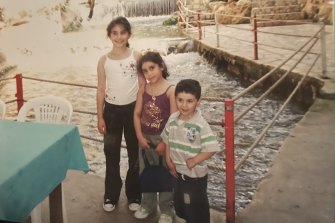 Youseph Dib as a child in Lebanon with his sisters Antoinette (left) and Jennifer.

Soon, the Dib family returned to Melbourne. The football remained in Lebanon.

Thriving in recess and lunchtime contests after his return, Dib joined his schoolmates in suiting up for the Waverley Blues. A series of eye-catching seasons for Blackburn in the years that followed led to an Oakleigh Chargers nod, where he would be exposed to a star-studded premiership squad.

“When I was in under-16s, I was brought on to train with that under-19s premiership team – [Matthew] Rowell, [Noah] Anderson, those guys who got picked up that year. That was my first real step up and being introduced to high-level guys roughly around my age,” Dib recalled.

He also struck up a friendship with Will Phillips, who taught him the importance of training with intent.

“He was similar to ‘Rowelly’. That work rate, I suppose, being a smaller inside player, I picked up small things off their game, mainly in the way they train.”

Dib, a graduate of Collingwood’s next-generation academy, will be available to all clubs in the draft after the Magpies decided against nominating for him. He might yet shape as a more attractive prospect due to his experience in black and white, though, considering he has already been exposed to pre-season training at AFL level. 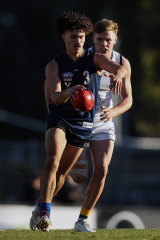 “I saw how everyone just enjoys it,” Dib said on his time training with the Pies.

“There’s also that balance of being really professional and knowing when to really work hard to earn your spot. It gets pretty competitive, which I brought into Oakleigh. Sometimes it can be a bit too friendly or a bit too nice. You need the competitive edge to fight each other for a spot, or fight for the draft.”

While waiting to learn his football fate as the draft approaches, Dib’s creativity in the forward 50 will take a back seat. For now, pizza-making takes centre stage.

“Dad runs an Italian pizza shop, so he’s got a takeaway section and then next door is the main restaurant,” Dib explained.

Additionally, Dib has thrown his support behind Hemisphere Management Group’s involvement in Movember, and said the campaign has helped raise his own awareness of men’s health. Also aiding Dib’s participation in the cause is his mastery of the moustache.

“I grow it pretty good which helps. I’ve grown mine from the start of the year, so I just keep trimming it. It helps being Arabic, growing hair is pretty easy.”

Tags: and, back, Dib’s, LEBANON, Pat, to
You may also like
Latest Posts