Jamarra Ugle-Hagan has come of age to lead the Western Bulldogs to a famous, courageous win over the defending premiers with the 20-year-old sealing the game with his fifth goal after being the best player on the ground in the last quarter.

The Bulldogs gave up an early lead midway through the first quarter and only reclaimed it with less than five minutes remaining when Riley Garcia coolly slotted a running goal to put them in the lead. 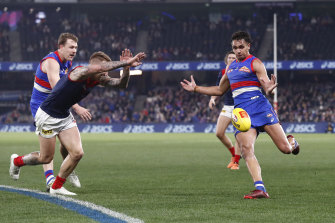 In a desperate four minutes they hung on until Ugle-Hagan kicked a long goal from the boundary inside the last minute to put them in the eight and leave Melbourne a game behind ladder leaders Geelong in second spot. The Bulldogs crowd went berserk as their finals hopes are alive and they are capable of beating anyone.

Marcus Bontempelli was enormous as the Bulldogs lifted themselves off the canvas several times after all looked lost when Melbourne kept responding with centre-clearance goals to keep them at bay. But they did not give up and deserved the win as their desperation was inspirational.

When they were in trouble with the opposition about to challenge, their centre bounce four steeled themselves to win the clearance and score to regain control.

It was deflating for the opposition and uplifting for the Demons, who know it took them to a premiership in 2021 and might well take them to another flag this season. 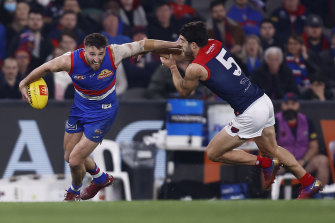 They had kicked six goals from centre clearances by three-quarter-time against the Western Bulldogs, with each one taking the sniff of victory from the Bulldogs’ nostrils.

It happened after the Bulldogs made a good start in the first quarter but lost their hard-won ascendancy as the Demons kicked the final four goals of the quarter.

It happened again after the Bulldogs worked their way back to within three points and then watched helplessly as the centre-square quartet served ace, ace and then another serve and volley to push the margin back out to 21 points.

The Bulldogs did not give up and came out after half-time with spirit and fight to rush Melbourne each time they tried to dispose of the ball and locked the ball in their forward half.

Tim English goaled on the run after nine consecutive inside 50s and then Aaron Naughton kicked a goal from a ruck contest inside the forward 50 to reduce the margin to just one point.

Then it happened again, with a centre clearance to Melbourne ending with a goal to James Harmes and momentum slowed again.

It was frustrating for the Bulldogs as they were carrying most of the workload but they could not hit the front.

Then Ugle-Hagan became the target with four marks and three goals in a memorable last quarter that showed a star being born in just his 17th game after being the No.1 pick in the 2020 national draft.