Essendon forward Shaun McKernan has tested negative for the coronavirus, but remains in doubt for round one after experiencing cold-like symptoms this week.

Club sources confirmed to The Age that McKernan was sent for precautionary tests and that the versatile tall had been away from the club's Tullamarine base this week, missing training on Tuesday, having reported as unwell. 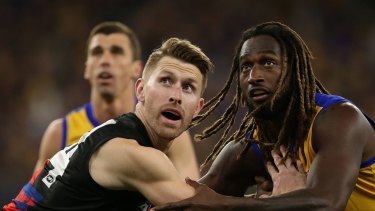 The Bombers are scheduled to open their season on Saturday against Fremantle at Marvel Stadium. Essendon indicated on Wednesday that McKernan had not yet been ruled out of the meeting with the Dockers.

McKernan follows Docker Sam Switkowski and Collingwood captain Scott Pendlebury as players confirmed to have been tested for the coronavirus.

AFL chief Gillon McLachlan said on Monday that a single positive case in the league's playing cohort would lead to the season being postponed. The league deferred a decision on whether to start the season until Wednesday night, when it confirmed Richmond would confront Carlton at the MCG in the traditional season-opener 24 hours later.

The likely absence of McKernan, 29, would further deplete an Essendon forward half already without Joe Daniher, who remains an indefinite proposition.

The Dons have however been boosted by the likely availability of ruckman Tom Bellchambers despite an interrupted pre-season, while tall forward James Stewart is also available after overcoming a groin issue. David Zaharakis (thigh) and Mitch Hibberd (knee) have also been given the green light to play.

Cale Hooker is at least a week away from returning from his hip injury, while there is no timeframe on a possible return for captain Dyson Heppell (foot).

McKernan kicked 17 goals in 16 games last year after enjoying an extended run of senior football as Daniher battled groin issues. The former Adelaide Crows tall has played just 78 matches in 11 years on an AFL list, and was sidelined for extended periods with hamstring injuries in both 2018 and 2019. He played the first final of his career as the Dons tumbled out of the premiership race against West Coast in an elimination final.

For the Dockers, important defender Luke Ryan (back) and off-season recruit James Aish (calf) both needed to get through fitness tests to be available after missing the club's second Marsh series game against West Coast. Saturday looms as the first premiership season match in charge for new Fremantle coach Justin Longmuir.

Meanwhile Essendon forward Orazio Fantasia told an official Essendon podcast that he was excited for the upcoming season after a 2019 campaign in which he battled injury and toyed with the idea of a return back to his native South Australia.

“I’m excited, it’s been a bit of a long build-up just getting the body right,” Fantasia said.

“Sometimes when you’re coming back from an injury that hampers you for a little while, it is frustrating and you get those mental demons thinking, ‘can I still do it to the same level?’. You’re sort of in a rush.

“Last year was the struggle, you’re in that mental grind where you’re playing, but you’re not really playing – you’re not contributing how you want to.”

Tags: dou, in, McKernan, remains, Unwell
You may also like
Latest Posts