For those unaware, Shearer, a tremendous athlete and gifted player, who ran out for the Maroons 26 times, was famous for always putting his hand up and declaring his availability for Queensland, no matter the team make-up, his form or whether he was even playing any more.

Radley’s addition to the NSW squad for Origin II raised plenty of eyebrows, given he hasn’t played since May 15. It turns out the way that Radley came on to the radar of NSW coach Brad Fittler was a phone call to the coach telling him he was ready to go if needed.

The Blues were short on energy and off-field talk in game one and Radley – the most likeable of characters – was seen as a good person to bring into the squad. He has been a valuable training addition to the side and was excellent through the week at opposed sessions.

This columnist told Radley about the legend of Shearer.

“Yeah, what Dale Shearer did, I guess that’s exactly what I did,” he said. “Even in the building game where I’ve worked, communicating is key and I thought I’ve got to communicate with Freddy, leave no stone unturned, and it worked a treat. I didn’t think I’d be called in so quickly, but I’m pretty stoked. I want to be part of this.”

“I was just with my dad and we were cruising around [last Saturday] … and I just decided to give Freddy a call,” he said. “I just wanted him to know I was feeling healthy. I was pushing to play against Parra [last weekend], but it just didn’t work out. I thought he would have had the same view like everyone else that I was not fit. I’ve been incognito, no one has known how quickly I was getting better and if it was up to me, I would have played against Parra. 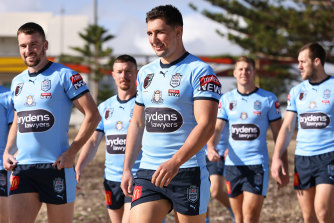 To Victor go the spoils: Roosters forward Victory Radley is loving life in camp with the NSW team in Perth in the lead-up to the second Origin clash.Credit:Getty

“Anyway, Freddy just called me on Sunday and the conversation was pretty simple. When he called he said, ‘Mate, would you like to come to Perth with the team’, and I said, ‘Man, I’d love to!’ We [the Roosters] had the week off this week to recover from injury, so it worked perfectly with my training and I’m making sure I’m fit.”

So, what if they suddenly lost a couple of players – could he play?

“I’m feeling a million bucks,” he said. “You’ve seen me out there. I’m not missing a beat. The boys are ripping in and I’m getting belted in the drills. I really am ready.”

One out of the box

New Blues hooker Api Koroisau sealed his rebirth as a NSW player with an impressive display in the coaches’ box in Origin I, and now he has revealed he wants a permanent coaching job down the track.

Koroisau was part of the squad for game one, but he has ended Damien Cook’s four-year reign as Blues starting hooker.

Brad Fittler has always been an Api fan, but when he sat in the coaches’ box with him it went to a new level.

“He knew exactly what was going on and he knew our weaknesses and what we were doing right,” Fittler said. “It made me think we could do with that out there.”

Koroisau admitted he enjoyed his time with the coaching group.

“The technical side of the game has always had an interest for me. I like to think about the game and what it’s like for the other players as well. So coaching has an appeal to me.”

Koroisau is already a two-time premiership winner (with the Rabbitohs in 2014 and the Panthers last year) and it could be three by the end of the year the way Penrith are rolling along at the top of the table this season before he heads to Wests Tigers next year.

“When I got into the box with Freddy and everyone else I was quiet at first,” he said. “It was a whole different environment, but once the game got going my adrenaline really kicked in and I couldn’t help but give my opinions. I’m grateful for the chance to have done that and I’m grateful for the support that the Blues and Freddy have given me. I hope I can repay it.”

Star Bulldogs recruit Luke Thompson has returned to England to deal with a personal issue and the club is not pressuring him to return in a hurry.

Thompson flew out on Friday and was in an emotional state. He has told those close to him he feels he is letting the team down as they struggle through another tough campaign, but the view is family comes first. The Bulldogs expect him home to resume his place in the side, but if what he is dealing with overwhelms him he won’t have to come back until he is completely comfortable. 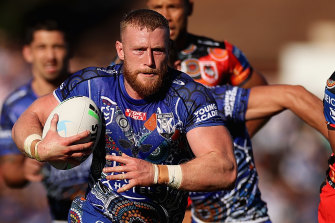 Canterbury general manager Phil Gould said: “Luke has not seen his family for a couple of years and we felt it important he returns home now during this difficult time. He is to return to Australia on July 8th, but much will depend on how things play outback home. “Some things in life are just far more important than football.”

Thompson has been battling on the health front as well. “Luke has been missing from our team over the past month due to a concussion event,” Gould said. “Luke has had ongoing symptoms and we have been monitoring his return-to-play protocols. We are hoping this short break to visit his family will assist in his recovery. He should be good to go once he returns.”

Here is an exclusive picture from inside the spectacular new Sydney Football Stadium and it shows a name that will be hard to argue with.

The media centre in the $828 million venue will be named in honour of the great Ray Warren.

“Rabs” joins Richie Benaud, who has the SCG cricket media centre named after him. It is a fitting choice, given the great service Rabs gave to the game. For many of us, he was the voice of rugby league. 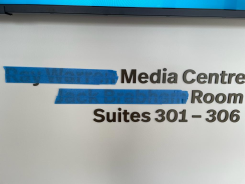 The cat is out of the bag.

There will be an unveiling ceremony in the first weeks after the new SFS is opened. The first match played at the shiny new venue will be the clash between arch-rivals Sydney Roosters and South Sydney on September 2.
The only shame is that because of the half-hearted effort to cover up the sign plenty of people who have been through the area knew of the honour before the man himself found out.

South Sydney coach Jason Demetriou made the tough call to replace rookie halfback Lachlan Ilias during the club’s heavy loss to the Dragons during the last round of the NRL and, not surprisingly, Ilias’ agent, Braith Anasta, wasn’t happy about it.

Almost straight after the decision was made, Anasta let his displeasure be known via a text message to club chief executive Blake Solly and football manager Mark Ellison.

The speed of Anasta’s response, rather than the content of his message, is what is unusual here. Most managers won’t give their input until the game is well and truly over.

The Bulldogs cop plenty of criticism as a club, but their swift action after Matt Burton was chosen to make his Blues debut deserves praise. Canterbury booked seats on a flight for Burton’s mum, Lisa, and have set her up with accommodation as well. General manager Phil Gould was on the phone to Lisa before Matt was – he was clearly caught up in the excitement.

Normally the NSWRL do this, but the Bulldogs beat them to it.

Siosifa Talakai had his family brought over by the Blues. They have also had a request from family for a photo of Talakai in his Blues jersey. They are planning to put the image on T-shirts to wear to the game on Sunday.

The mystery surrounding the non-selection of Josh Addo-Carr for this Origin series has bothered plenty of people in recent weeks. From everything I can gather it is simply due to a lack of form in the first six weeks of the competition, combined with a busy off-field schedule, which has made him one of the most marketable characters in the game. It was felt he was doing too much off the field and not enough on it. Throw in the need for robust carries out of your own territory and you have the reasons.

This column has been pushing for Joseph Suaalii to be elevated from the squad to the Blues starting side. Initially, I thought he was a two-year project but, from everything I can gather, the view is that he is ready now. It would have been hard to toss him into an Origin game of this magnitude with so much at stake after a handful of games, but be sure the Roosters teenager was under strong consideration.

You learn plenty about people when you tour with Blues side. NSW chief advisor Greg Alexander has a go-to meal: sardines and honey on toast. Alexander got the tip on sardines being good for you after listening to an interview with Rod Stewart.