Wales star Gareth Anscombe opens up for the first time on his knee injury hell, revealing he had to wait for someone to DIE for the bone graft which helped complete his recovery: ‘It has been a really dark road. I was in freefall’

Gareth Anscombe’s third operation in 2020 involved the breaking of his right tibia, the total realignment of his leg and the insertion of a bone graft from a donor into his knee.

Three huge metal screws, which still remain, keep the leg in one piece. ‘I have wondered who the donor is,’ said Wales fly-half Anscombe. ‘I hope they gave me an athlete’s bone!’

After more than two years out injured, Anscombe is now ready to discuss the right-knee injury and three surgeries which threatened his career. The details are harrowing. The scars — physical and mental — are still there. 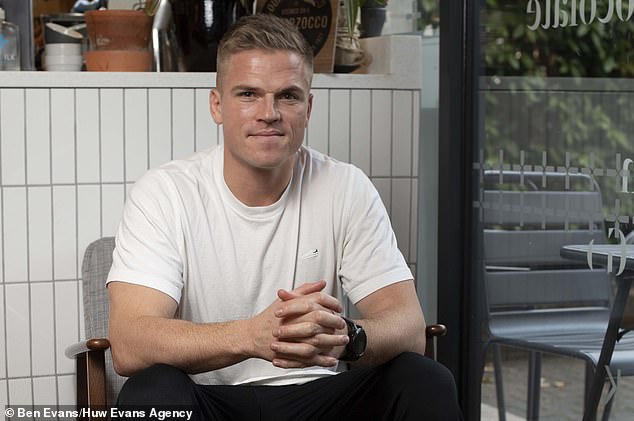 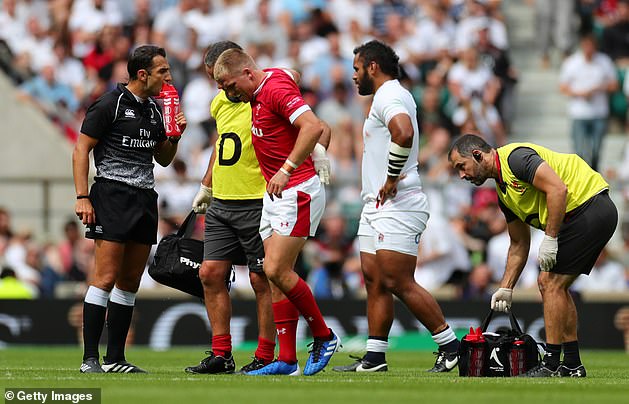 ‘It has been a really dark road,’ said Anscombe, 30. ‘I was in freefall for a big part of my life. My surgeon told me I needed to get my head around the prospect of not playing again.

‘I was anxious, frustrated, angry and scared. I just wanted to move on with my life even if rugby wasn’t in it and at one stage we were seriously looking at that.

‘To even be back playing now is a success really, because there were a lot of people who questioned whether I could do that.’

The start of Anscombe’s remarkable journey began on August 11, 2019. Fresh from kicking Wales to Six Nations Grand Slam glory, he was his country’s first-choice fly-half for that year’s World Cup.

In a warm-up clash with England at Twickenham, Anscombe looked to sidestep Elliot Daly and immediately felt a pop and a twist in his right knee.

The New Zealand-born back initially carried on, even kicking a conversion, before limping off. He was sent for scans with his World Cup dream in the balance.

‘It was an anterior cruciate ligament rupture. I was numb. It was an overriding feeling of shock and frustration,’ recalled Anscombe.

‘It was supposed to be nine months out but it turned into 25. It was a hell of a long time out and no-one saw it coming. The setbacks along the way slowly got worse and worse. Suddenly, it was a fight to save my career because the people we were speaking to were really unsure if I’d make it back.’ 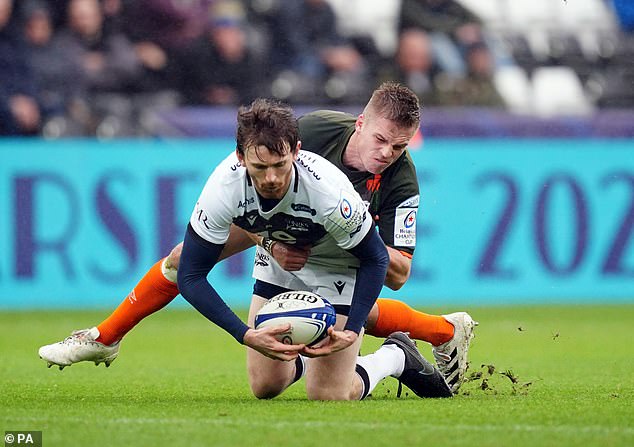 He had surgery immediately to fix his ACL and a lateral tear to his meniscus. A piece of his hamstring was grafted to create a new ACL. It soon became clear there were still problems with his knee and a second keyhole operation took place in December 2019.

Anscombe’s surgeon, Andy Williams, consulted colleagues from around the world to try to find a solution. In the spring of 2020, something radical had to be done. ‘I had a tibial osteotomy. My right leg is a little bit bow- legged,’ explained Anscombe. ‘Because of that, my ACL graft was coming under a lot of stress. When we did a scan we saw part of my bone was getting quite soft and brittle, which is dangerous.

‘My ACL repair has been good. That is not what nearly finished me, it’s been this bone issue. They had to realign my hip, knee and ankle because they were about seven degrees off.

‘They cut part of my tibia to straighten my leg up. I needed to get a bone plug from America, which essentially involves waiting for someone to pass away.

‘Part of their bone was put into my knee. That required three big screws being inserted. 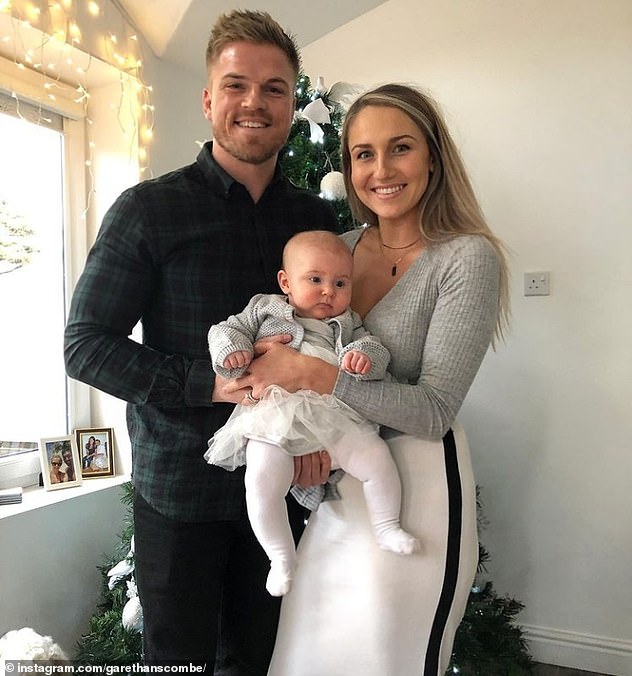 ‘At that stage, it wasn’t a case of if I would get back playing but whether I’d be able to run again.’

Anscombe’s third and final surgery was delayed from March 2020 until July by the pandemic.

‘I’d rehabbed for eight months and then things were even worse than before,’ said Anscombe. ‘Being bed-bound with no end goal was certainly the hardest part. I didn’t know if I’d ever get back. There was just no end to it. ‘We’d planned the surgery for March but it got to a point where if I didn’t have it soon we’d have a new child and I wouldn’t be able to help my wife. I was bed-ridden for four to six weeks. My wife converted one of our downstairs living areas into my bedroom. Once I was out of my knee brace the process started again.’

Anscombe knew his career would be over if the third and final surgery failed. It was a stressful time for him and his pregnant wife Milica. 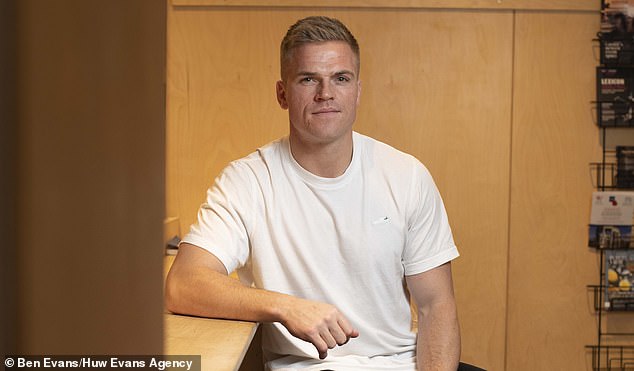 In September 2020, the couple welcomed their daughter Teifi as Anscombe slowly got back to his feet. There was light at the end of the tunnel.

With the help of close friends Ellis Jenkins and Cory Allen — who were both also recovering from serious knee injuries — Anscombe started to make progress.

At the Ospreys, medics Chris Towers, Ant Carter, Matthew Bowen and Liam Thomas played key roles — as did Prav Mathema and John Miles from the Welsh Rugby Union. By September 2021, after 13 months of further rehabilitation work, Anscombe finally returned to the field for Ospreys against Northampton Saints in a pre-season friendly.

It was his first match in 761 days and also his Ospreys debut, having joined from Cardiff the summer he got injured. On October 30, he was back in the Wales side against New Zealand — his first Test in 812 days. Against all the odds, the miracle recovery was complete.

Ultimately, getting back to play for Wales was what got me through,’ said Anscombe. ‘When you’ve had some of the highs I’ve had with Wales, it’s a drug you want to keep taking. 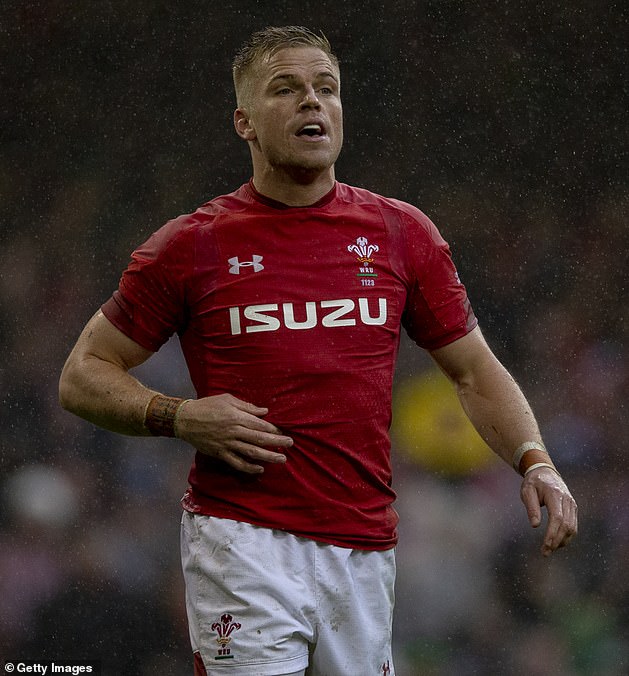 ‘I won’t see myself as successful until I’m back to where I was in 2019. I missed the game in my first year out but you get used to watching and to some extent I was able to accept not playing again.

‘The moments I run down the tunnel with Wales and look up to see the crowd singing the national anthem are really special and what I’ll miss when I stop playing. I had a taste of that so I had an overwhelming sense of gratitude to be out there against New Zealand.’

He added: ‘I wasn’t the best person to be around for long periods of my recovery. When you are not seeing any improvement in your knee, you just think “What’s the point? I can’t do it”.

‘There are lots of people I have to thank, but my wife is right at the top of the list. It’s particularly hard for me to articulate how grateful I am to her and my family.

‘If I’d had to do it alone I would probably have chucked in the towel. I had people around me who kept morale high but also allowed me to moan — that comes pretty easily to me!’

Anscombe believes he will only improve in 2022. He says he is at 80 per cent of his ability right now as the knee still gets sore and requires constant management. 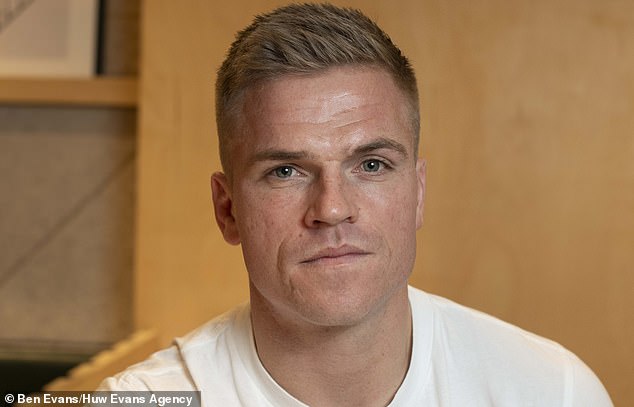 Given what he has been through, Anscombe is not looking too far ahead. He counts himself fortunate to be back on the field at all. Seeing his Ospreys team-mate Ifan Phillips lose a leg and his career in a motorbike accident has added yet more perspective.

‘When I look at Ifan’s injury and weigh up what I’ve been through, I feel I’ve got away lucky,’ said Anscombe. ‘My injury changed my life for two-and-a-half years. Sadly, Ifan has a big battle ahead of him.

‘I’ve learned to be more grateful and to put things more in perspective. I’m still not great at it and my wife reminds me constantly about it. You need to try to enjoy life.

‘There are more important things than rugby. What has happened to me has shown me that. 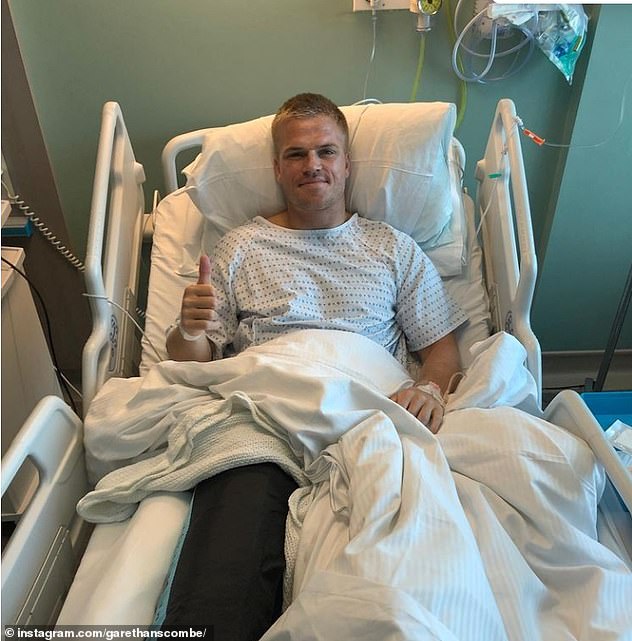 Anscombe underwent three operations after enduring the dreadful injury in 2019

‘When you’re in the day-to-day grind of a season, rugby does become a job. But through my injury, the biggest thing for me has been having more of an appreciation for the game and how lucky we are to play it. I missed it.

‘I knew I was a competitive person, but you don’t know if you’re resilient until you’re put in certain moments. Becoming a father has had a big influence on me.

‘Teifi has been as good a rehab tool as anything because when you come home, you have a little bundle of joy who doesn’t know anything about your knee.

‘It’s been a challenging time in my life and career, but my daughter has been one of the best things that has ever happened to me.’