Dylan Walker is adamant he has the capability to return as a “role model” in the NRL, as Manly continue to weigh up whether to offer the 26-year-old a deal to remain at the club beyond 2021.

Walker is off contract at the end of the year and is hoping to convince coach Des Hasler he is worthy of extending his stay on the Northern Beaches. 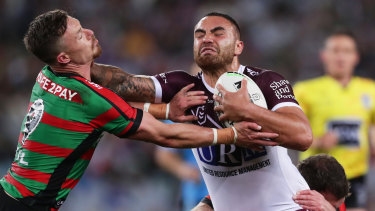 Manly chose not to stand down Walker after he was charged, giving his the green light to continue playing. Walker said his management had yet to hear anything from the club about a future contract.

Walker’s comments come after questions were raised over Hasler’s future at Lottoland following a devastating 46-4 loss in round one against the Roosters. Walker said he could not fault Hasler as a coach, after being mentored by him during his toughest times.

“He’s helped me out, we can say that,” Walker said. “He showed great faith in me … I’m thankful for Des for what he’s shown me and thankful to the club. All I can do is what I do next, I can’t really dwell on the past.”

Walker is expected to remain at fullback for Manly until Tom Trbojevic’s expected return from a hamstring injury in round four. Before Saturday night’s game in the no.1 jersey, Walker had played fullback just twice in his career.

Walker said he watched a replay of the game straight away after coming home, to better understanding how his team had got it so wrong. Walker said he put the “terrible” performance down to an attitude issue going into the game.

“When you’re getting spanked for 40 points, it’s never a good feeling,” he said. “All the hard work we put in the preseason, we didn’t show that at all Sunday … all we can do is get better.”

Tags: convince, h, Manly, out, to, Walker
You may also like
Latest Posts