What purpose was served in quoting an anonymous Rugby Australia source critical of Queensland Reds coach Brad Thorn following his decision to put his name forward as a possible successor to Wallabies mentor Dave Rennie?

That question has certainly energised a battalion of keyboard warriors since the Herald broke the news last Tuesday that Thorn would at least challenge Brumbies coach Dan McKellar for the Australian head coaching position. The source has been pilloried as “gutless” for suggesting that Thorn was “not a team player”, while I have been described as “a weasel” for citing an unnamed critic.

All part of the healthy cut-and-thrust of Australian journalism, at least as it is being practised in this era of social media and instant opinions. “Weasel”, incidentally, was among the nicer words chosen…

I confess I was taken aback by my own source’s comments. I certainly had not gone to RA expecting to elicit such a strong reaction to Thorn’s announcement. Indeed, I had rung to ask a single question which conceivably could have been answered with a single word: Had Rugby Australia already decided to give the job to McKellar?

Yes or no. While RA had never indicated McKellar as heir apparent for the job, it certainly seemed to be clearing the way for him. They had made him Rennie’s forwards coach, though initially on a part-time basis while he spent the first part of his winters coaching the Brumbies. Now he is set to formally end his relationship with ACT Rugby at the end of this Super Rugby Pacific season and move full-time into the position as assistant coach.

I didn’t have a runner in the race. Although I was, I believe, the first to acclaim McKellar as the next Wallabies coach – back at a time when the Brumbies were far and away the best Australian Super Rugby team – I have softened my stance in more recent times. 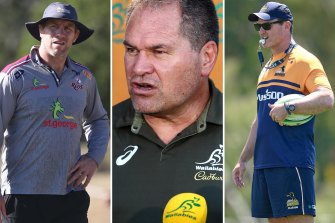 If Thorn continued to make headway with Queensland, I suggested, then all bets should be off. Thorn has, in fact, made up considerable ground on McKellar, some would say to the point of the Reds overtaking the Brumbies as the best Australian team, and so it seemed to me he had as much right as McKellar to bid for the most prestigious coaching role in Australian rugby.

It was no surprise the source wished to remain anonymous. His comments that Thorn had “not been good to work with” undoubtedly inflamed the situation. But he felt it was right to bring it out into the open and, after a week’s reflection, he still feels that way.

Like many a source these days, he didn’t want his name revealed. He could do without the poisonous personal vitriol. Journalists either respect his request to allow him to make an unattributed quote or the story doesn’t get told.

As it happens, a lot of good may yet come out of this imbroglio, though communication between RA and the Queensland Rugby Union remains at rock bottom.

Case in point: RA has suggested the Reds are being obstructive in terms of admitting Wallabies staff to their training program. Queensland’s response is to ask precisely who has been excluded. Head coach Dave Rennie has visited the Reds, so too coaching staff members Scott Wisemantel, Matt Taylor and Petrus du Plessis. Team manager Chris Webb has been there, so too RA’s new chief performance officer Peter Conde. At least five staff are shared between RA and the QRU. That sounds like collaboration.

The only person who might not be enthusiastically welcomed at Ballymore would be McKellar, but RA has been at pains not to make that request. And why would the Reds open the door to the man whose current job is to ensure the Brumbies finish ahead of them?

If things were so poisonous, why has Scott Johnson, RA’s director of rugby until the end of 2021, now started working in tandem with Thorn as a part-time QRU high performance consultant (coaching and development)?

“I don’t know what’s going on now so I can’t speak to that but all I can say is that in my time there (at RA), I found him (Thorn) really good to deal with,” Johnson said on Tuesday.

From the initial RA outburst through to the indignant QRU response, a lot of heat has been generated by this controversy but very little light.

If RA’s criticism of Thorn extends no further than him being accused of not going through his inbox carefully enough, then this has all been a storm in a teacup. But if there is some deep-seated problem of misalignment between how Queensland’s feeds into the national team program, then that’s something that needs to be sorted out immediately.

Good thing all parties are getting together later this week to clear the air. Australia has too few quality coaches to be able to ignore a man of Brad Thorn’s standing.

Watch every match of the Super Rugby Pacific on the Home of Rugby, Stan Sport. This week Super Round hits Melbourne in a competition first with all twelve teams taking part in a three day Rugby-Fest. Matches begin from Friday 5.30pm AEST, Saturday 4.30pm AEST, and Sunday 1.30pm AEST, all streaming ad-free, live and on demand only on Stan Sport.