If you’re going to come after anyone, disgruntled Parramatta fans, then come after Mitchell Moses.

That’s the message coming from Moses himself, who has moved to take the pressure off young fill-in halves partner Jake Arthur ahead of the blockbuster local derby against unbeaten Penrith. The Eels have been criticised for their unexpected loss to the Cowboys in Darwin, with much of the vitriol directed at Arthur.

There have even been suggestions of nepotism given Arthur is son of coach Brad, despite the fact the club had little choice but to move Dylan Brown from five-eighth to centre to deal with an injury crisis in its outside backs.

The return of centre Tom Opacic and the potential comeback of winger Sean Russell, named on an extended bench, has allowed Brown to move back into his customary position for Friday’s encounter. Jake Arthur has been listed among the reserves.

Few playmakers were more maligned when they first came into the NRL than Moses, who has shown his maturation into a leader by taking the heat of the younger Arthur.

“Come at me, not him,” Moses told the Herald. “It’s on myself and the rest of the senior players. I will take the full brunt of it, I couldn’t care less. I’ve been through it all, I’m happy for people to come at me. 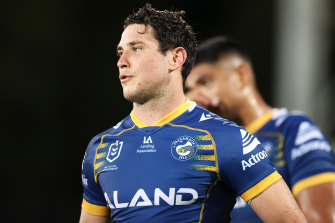 Mitchell Moses wants to step up against the Panthers.Credit:Getty

“We back him to the death. The position we’re in, that’s where we are at. We had injuries, not many people realise that. I understand their side of it, but he is the best person for the team in the scenario that we have.

“We played rubbish and didn’t help him out enough. He was one of our better players, I think that criticism was pretty harsh.”

Despite a relatively quiet game against the Cowboys, Moses has been a standout this season. The former Tiger has already notched 13 try assists, four more than nearest rival Cameron Munster, despite not having the improving Brown by his side at the scrumbase during the past fortnight. 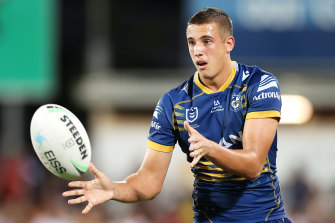 Jake Arthur was trolled with accusations of nepotism on the weekend.Credit:Getty

Save for a preseason trial, Friday night will be the first time Parramatta and Penrith will face off since their epic finals clash, which the Panthers won in a thriller. While keen not to dwell too long on the past, Moses said it was difficult not to think about what he or his teammates could have done better to change the result.

“After a loss, you’re always thinking like that,” he said. “It was upsetting how it happened, how we finished.

“They’re a great side, there’s no hiding that. From one to 17, they are a quality side and have that next-man-up mentality. Brian To’o is out and then Taylan May comes in and is one of the best wingers in the comp at the moment. It says a lot about how they are building, how much depth they have in their squad, and it’s a big challenge for us. We’re definitely excited.”

Speaking just an hour before Brown was named as his halves partner, Moses said he was proud of how much the Auckland product had improved his game this year.

“Outstanding. The footy he has been playing has been enormous,” he said. “He’s put a lot of time into is game, Dylan. He’s a person where not much phases him, he’s a pretty cruisy bloke and relaxed. I’m just happy to see him play the footy that he’s playing, he’s grown a lot in the last 12 months. I’m really happy for him, and hopefully, he can keep going with that form for us.

“We need him to keep doing that for us to play good footy.”

Moses is contracted until the end of 2024, but has an option in his favour for the final season. However, he gave no indication of a desire to trigger it.

“I love this club,” he said. “It’s a club that has looked after me and given me a chance. We will have to see what happens I guess, I pretty much just leave it up to my management to do it all.

“They will do what’s right by me and I’ll just go out and play footy.”

Madrid 'race to sign Aurelien Tchouameni' after missing out on Mbappe