AFL CEO Gillon McLachlan says increasing the diversity of those employed in the game’s coaching and administrative ranks will require a push from headquarters as it is not happening organically.

He said the league would need to force change rather than just wait for opportunities to open up for people from diverse backgrounds as that approach was taking too long.

McLachlan pledged to create a more welcoming and inclusive environment at the AFL and to support people from diverse backgrounds to establish careers in the industry in coaching and administration as well as taking on leadership roles in executive positions and on boards. 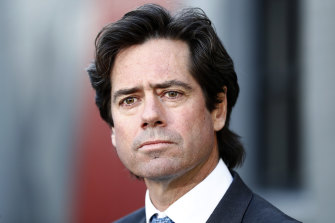 “We have to keep pushing change, not waiting for it to happen organically. It’s frankly too slow,” McLachlan said.

Despite more than 10 per cent of the playing population being of Indigenous heritage and growing diversity among playing ranks Richmond’s Xavier Clarke and the Western Bulldogs’ Travis Varcoe were the only two former Indigenous players employed as coaches in the clubs’ men’s programs in 2021.

There has also been little diversity among administration or media coverage of the game with racism remaining a major issue for players from non-anglo backgrounds.

In 2003, the NFL adopted the Rooney Rule to ensure a more diverse range of candidates were interviewed for vacant coaching positions.

McLachlan made his statement when responding to Australian Sports Commission CEO Josephine Sukkar’s Dungala Kaiela Oration which called on all major sporting organisations to come together with a common voice to tackle the issues confronting people from non-Anglo backgrounds who are involved in sport.

“It’s about providing opportunity not just on the sporting field but off it so that young Aboriginal and Torres Strait Islanders can see there is a pathway to off field jobs and leadership positions,” McLachlan said.

McLachlan said the AFL had mandated that all 18 clubs employ an Indigenous liaison officer although their exact role and the influence they may have on clubs remains ill-defined.

“We have to force change and ensure there is support and also more opportunities for Aboriginal and Torres Strait Islander peoples at our clubs,” McLachlan said.

The furore that surrounded Adelaide forward Taylor Walker’s racist comments referencing North Adelaide’s Robbie Young at a SANFL game in July was a reminder that the game was not immune to such incidents at the highest level. Walker received a six-match sanction after mediation and will play on in 2022.

“As far as we have come, we have a very long way to go,” McLachlan said.

He said for the game to head in the right direction people from all sorts of backgrounds needed to feel culturally safe and have a sense of belonging, and it was critical for the game’s leaders to keep “listening to those voices, hearing what they are saying even when the message is painful” [and to] “ensure we are not afraid of the conversation.”

Tags: 'chang, have, keep, pushing, to, We
You may also like
Latest Posts