As captains of Sydney clubs, Ben Hunt and Daly Cherry-Evans never thought they would spend the final eight weeks of an NRL season on Queensland turf. And they certainly never imagined they would get the chance to play a first grade game on the same grass they learned to play rugby league. 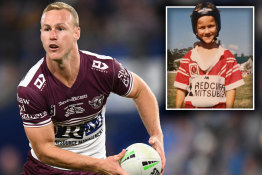 Daly Cherry-Evans as a six-year-old playing for Redcliffe where his NRL side will play on Sunday.

Come Sunday, Cherry-Evans will receive a hero’s welcome when Manly play against Cronulla in Redcliffe in what is supposed to be a “home” game for the Sharks.

Both players shared photos with the Herald of them in action as juniors as they reflected on their favourite childhood memories.

Cherry-Evans spent three years playing in the under-7s, a year in the under-8s, then jumped straight into the under-10s, while his father Troy spent time playing with and against the Dolphins. 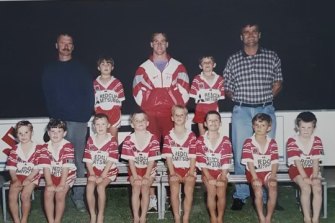 A young Daly Cherry-Evans (fourth from rfight) with his father Troy (red jacket, back row) in 1996.

“My best memory was playing there at half-time during a Queensland Cup game. I can still remember scoring a try as a kid. It gave me the biggest buzz. They had decent crowds at those games. I would have been a seven or eight years old.”

Redcliffe is one of the expansion clubs looking to enter the NRL, and while Cherry-Evans would be the perfect fit for the start-up franchise, his heart remains with the Sea Eagles. He has already spoken about playing on well beyond his current deal that expires at the end of 2023.

Manly are in red-hot form and while Tom Trbojevic has been excellent, and the rise of youngsters Josh Schuster, Haumole Olakau’atu and Morgan Harper impossible to ignore, Cherry-Evans and his halves combination with Kieran Foran is a big reason that the Sea Eagles are soaring.

“Even though [Foran]’s five-eighth, he could easily play halfback and I could play five-eighth. We work off each other … it’s going really well and we’re enjoying it,” Cherry-Evans said.

Hunt grew up in Dingo, about 90 minutes west of Rockhampton, before he started boarding school at St Brendan’s when he was 13. There was a lot of schoolboy success, representative games with Capricornia, and even an under-15s national championship at Browne Park, Saturday’s venue against South Sydney.

“We’re living in strange times at the moment, the NRL isn’t what it always has been, but I’m very excited to get up back home and play in front of friends and families who I grew up with,” Hunt said.

“There were a lot of schoolboys games at Browne Park. There was an open-age final one night when we won by a couple of points in the rain.” 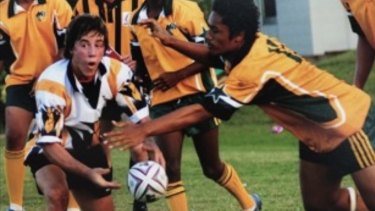 Hunt not only wants a win for sentimental reasons, but the Dragons need to click into gear now to keep their finals hopes alive.

“It was probably two weeks ago we needed to do that,” Hunt said.

“We need to turn up, compete hard, it’s not about scoreboard, it’s about our attitude and doing what we know we can do.”

Tags: buzzing’:, Cherry-Evans, we're
You may also like
Latest Posts