These two teams entered the sudden-death semi-final with two wins to show from eight finals between them since 2019 when the Brisbane Lions became a top eight team.

Less than one percentage point separated them at the end of 22 rounds and with seven minutes remaining scores were level. 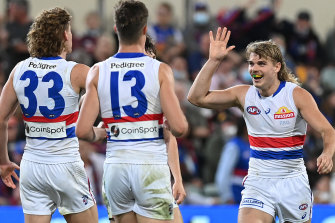 Bailey Smith was enormous in the final quarter.Credit:Getty Images

At the end it was a rushed behind just inside the same point post that gave the Lions a top-four spot that earned the Bulldogs a spot in the preliminary final.

The hero was Bailey Smith, a man wearing the No.6 jumper, his number half hidden by a mullet, who kicked two goals and created another in the final quarter that was the difference, the deepest midfielder in the deepest midfield finding the run the Bulldogs needed in a desperate last quarter.

He was supported by Jack Macrae, not only an All-Australian but a super player when needed.

His scissor kicking left-footers had penetrated tight spaces throughout the season, but it was his composure when he kicked the first goal of the last quarter that revealed what a player the quietly spoken midfielder has become for the Bulldogs.

Not that the game would be decided through the midfield should come as a surprise as both teams have obvious weaknesses at both ends of the ground and honest rather than dominant ruckmen.

No-one doubted the contest would come down – as commentators love to say – to whichever team won the midfield. In the end it came to down to a centre clearance which Tim English won and a defensive throw in which the Bulldogs’ midfield scrounged.

Early on the Bulldogs were winning the ball when it hit the ground and creating enough handball chains to feel they could break the Lions with Macrae’s penetrating left foot on the end of too many.

But the Lions maximised their chances to score with three goals from centre clearances in the first quarter when their ruckman Oscar McInerney impersonated John Nicholls for five minutes to put the ball into the dangerous space Charlie Cameron lurks. 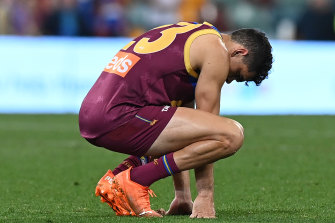 A dejected Charlie Cameron after the final siren.Credit:Getty Images

That was a concern for the Bulldogs as their inability to control the opposition ruck had cost them the 2020 elimination final, also at the Gabba.

Sensing the moment, Lewis Young and English rotated in an attempt to stem the flow and the Bulldogs midfielders paid more respect to the defensive side of stoppages to even up the centre clearance battle.

With that part of the ground neutralised the battle front went further and wider where midfielders roam without close company. Out there the game swung like a pendulum.

Jarryd Lyons led the charge for the Lions, quelling Tom Liberatore, who kicked the Bulldogs’ first two goals, while bringing his teammates into the match. The cast-off from two clubs has been a revelation with his name not misplaced sitting alongside Dayne Zorko, Lachie Neale and Hugh McCluggage.

Then the tide turned as the Bulldogs began winning stoppages but without a reliable avenue to goal they could not gain an edge, the loss of Josh Bruce just as debilitating to the ragged band from Whitten Oval as the loss of Eric Hipwood and Dan McStay had proved for the Lions.

They would have to rely on the deepest midfield of all to get them over the line and it did with Smith and Lachie Hunter racing up and down the wings to create the space the team needed to pull back a 10-point deficit at the final break.

The deepest mid inflicted on the Lions the deepest cut of all putting them out in straight sets for the second time in three years, the Bulldogs’ one-point win accurately reflecting the tug of war occurring in the middle of the ground.