They ripped into each other in the most brutal forward battle of the season, but New Zealand coach Michael Maguire is adamant there will be no issues when Jared Waerea-Hargreaves and Nelson Asofa-Solomona come together for Test duty.

Waerea-Hargreaves and Nelson Asofa-Solomona were engaged in a running battle throughout the Roosters’ win over Melbourne on Friday. Both received charges from the match-review committee, but escaped with fines rather than suspensions.

The enforcers will become teammates when the Kiwis come together for the season-ending Rugby League World Cup. Despite the spiteful nature of their skirmish, Maguire said there would be no issues when he picks the pair to play alongside each other.

“They are two winners doing what rugby league is all about,” Maguire said.

“It was good to watch. They are two competitors and whether they are going against each other or with each other, they compete.

“I thought it was a good, strong showing from both of them. I don’t think they crossed the line, they just play the game the way rugby league is meant to be played.

“It’s always going to be close calls with the speed of the game the way it is and the way the contact was.”

While some commentators felt the players crossed the line and should have copped suspensions, Maguire said the forwards played with the type of aggression that makes the game unique.

“That’s those two players. That’s what they are like, they are brilliant,” he said.

“You expect that from the middles, they are stamping their authority on how they play. 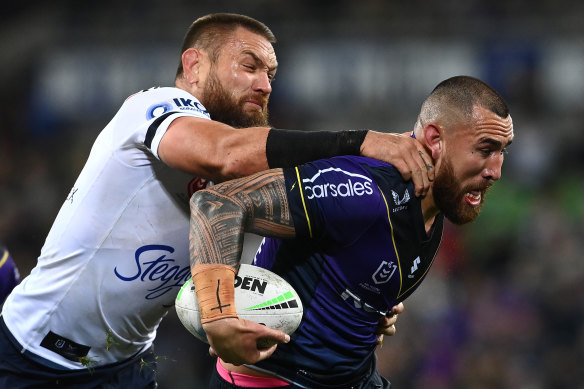 “I thought it was a really good, old-style rugby league game.

“You look at some of the [refereeing] calls and you think ‘Why?’”

Injuries have restricted Waerea-Hargreaves’ Test appearances, but Maguire said the Roosters prop was keen to be involved in his World Cup campaign.

“Definitely, he’s been a big part of the Kiwis since I was involved,” Maguire said.

“He missed the mid-year Test due to injury, but I know he’s worked really hard in the background to get him into the form he’s in.

“He played really hard for his team on Friday night, that’s for sure.”

Asked if he would need to address Asofa-Solomona and Hargreaves after last week’s clash appeared to get personal, the premiership-winning coach said: “Not at all.

“I know they are very passionate about the Kiwi jersey. A number of players have been together for three or four years now.

“We haven’t had a whole lot of Test matches due to the Covid situation, but every time they come together they’ve been a strong unit.”