Ben Hunt and Talatau Amone have both urged Dragons tyro Jayden Sullivan to stay at the Red V despite a mooted two-year extension for Hunt potentially blocking his path.

Hunt’s career-best form has him considered favourite for this year’s Dally M Medal, despite the Dragons’ finals hopes being all but over.

St George Illawarra are set to ramp up negotiations on a new deal with Hunt, who is signed for next year, that would tie him up beyond his 35th birthday and until the end of 2025.

As reported by the Herald last week, Sullivan’s management will request a release if Hunt is locked in to the No.7 jumper for three more years, given the 20-year-old’s potential and growing interest from rival clubs, despite Sullivan being signed until 2025 as well.

Sullivan and Amone are represented by the same agent, with that stance being conveyed to Dragons officials during negotiations for Amone’s 2024 extension, which was confirmed on Thursday.

When quizzed on Sullivan, Amone and the Dragons’ three-into-two scrumbase call, Hunt pointed to his first 80-odd games serving as a bench utility and back-up half in Brisbane as the making of his career.

“I’m not saying Jayden’s like me, but you look at my career, I didn’t get to play halfback until I was 24 and playing regular first grade there,” Hunt said. 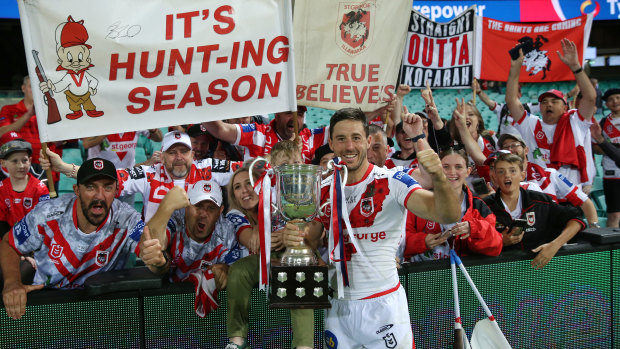 Ben Hunt after the Dragons’ Anzac Day victory over the Roosters. The halfback has been in career-best form in 2022.Credit:NRL Photos

“Personally, I’d like Jayden to stay at the club. I think he definitely offers a lot. If he can toil away and play a bit of hooker or play some different positions, you never know what can open up for you. You’ve just got to be a sponge and learn as much as you can.

“That early part of my career set me up and has given me opportunities to play State of Origin at hooker. We had some good halves [at Brisbane] in Peter Wallace and Darren Lockyer so, in the long run, I was pretty blessed to have them there to learn off, I think.

“They were the same, they really encouraged me to talk. But it wasn’t until I was probably 23 or 24 and had played a fair few games of footy that I moved into the halves and got pretty vocal.”

Hunt has little interest in shifting to hooker down the line – “I’m trying to extend my career, not shorten it up, so I don’t want to be getting in the middle too much” – and said great mate Andrew McCullough has not mentioned retirement at the end of 2022 as has been quietly suggested by some at the club. 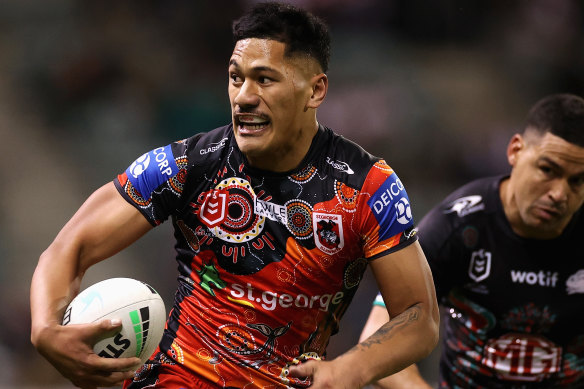 Amone, meanwhile, has grown into the No.6 role alongside Hunt this season, having long been touted for big things alongside juniors teammates Sullivan and Tyrell Sloan.

His re-signing came following interest and personal calls from Dolphins coach Wayne Bennett that “gave me shivers”, before Amone’s strong family ties in the Illawarra helped keep him in red and white.

The 20-year-old hopes Sullivan does the same ahead of a must-win clash with Canberra on Sunday.

“We talk about [playing together at the Dragons] all the time,” Amone said. “Not just since we started playing together at NRL level but before this, we’d be talking about coming through together and taking that chance to do something special for the club.

“Whatever he does, that’s up to Jayden and his family. I don’t look into that, but I know when we’re training he’s enjoying his time here and we’re learning a lot.

“If he stays I’d be so happy for him because there is a chance to do something special. But if he chooses to go then that’s up to him and wherever he is he’ll go great.”