The delay of the Rugby League World Cup to 2022 looms as a major hurdle for the NRL’s second Brisbane team, with the competition newcomers to have less than six weeks for their players to train together before their first season.

With the Redcliffe Dolphins favourites to be selected as the 17th team this week ahead of the Firehawks and Jets, officials involved with the three bids are aware the bulk of their recruits will not be available to train until the start of 2023 if involved in the World Cup.

Under the collective bargaining agreement, players are entitled to six-to-eight weeks annual leave. This year players with more than five years experience were entitled to 10 weeks because of COVID-19 and the restrictions that have been placed on them for the past two years.

Should players feature in the World Cup final on November 19 next year, some of them will not be required to start training until the middle of January.

Cameron Munster and Christian Welch have been identified as two targets for the new franchises, and both are likely to be involved with the Kangaroos.

Redcliffe’s bid chief Terry Reader told the Herald: “That would be a consideration for the coaching staff and strength and conditioning staff in terms of how our pre-season looks, but that’s only relevant if we are successful [with our bid] … we don’t really want to speculate on anything.” 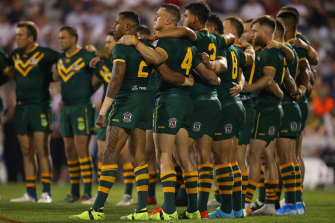 The Kangaroos will be favoured to reach the World Cup finalCredit:Getty

Jets boss Nick Livermore said a coach like Wayne Bennett would be the perfect man to get the most out of a squad with limited preparation, which he did at short notice with the Queensland Origin team last year.

“It’s a tremendous hurdle to overcome for any new team that comes in,” Livermore said.

“That’s where a guy like Wayne Bennett becomes even more valuable. Culture will be so important, and what Wayne does really well is he invests in the person and the on-field performance is second to that. He’s proven he can do it in the past [with limited time].

“If you do sign a number of players on show at the Cup, it can help drive memberships and team morale knowing you’ve got players of that calibre and level of experience in your squad.”

Livermore said it was impossible to ignore reports Redcliffe was a done deal, even though the Jets service the giant growth area to Brisbane’s west.

“We’re not giving up hope, from all reports News Limited have put up the money, and what News want they often get,” Livermore said.

“We understand the game needs money, there’s pay-TV and the people who invest in the game want input into who will be the next franchise.

“But how all that impacts on whether boys and girls get involved with the sport, that’s up to the ARL Commission.”

When the Cup was postponed earlier this year because of the uncertainty about COVID, it emerged all teams – not just tier-one nations Australia, New Zealand and England – would feature up to 70 per cent of players and staff provided by the NRL.

Bennett told News Corp over the weekend the challenge for the new franchise was bringing together players from other clubs, unlike the Broncos who had a ready-made team of Brisbane-based stars.

Tags: cou, Cup:, League, Rugby, Why, World
You may also like
Latest Posts