The Western Force and the Melbourne Rebels will be doing everything they can to ignore the emotional debate occurring in Welsh rugby at present.

Oakwell Sports Advisory – the London-based consultants who worked on the deal between CVC and the English Premiership – recently submitted a report to the Welsh Rugby Union that included a recommendation to cut Wales’ professional teams from four to three. Cue the outrage.

Rugby Australia has closed the door on that debate in Australia – at the present time, a good decision – but the Rebels and Force are a bit lucky that their continued struggles in Super Rugby and self-evident depth issues have not come under more significant scrutiny.

However, let’s put that to one side for the moment because two announcements this week have given the distinct impression that rugby – big picture rugby – is starting to get back on its feet again following three years on the canvas after repeated COVID uppercuts.

It really is hard to underestimate the importance of both the Australia A and Junior Wallabies programs, with the former heading to Fiji for the Pacific Nations Cup in July, while the latter will host New Zealand, Fiji and – most pleasingly – Argentina, also in July.

Dave Rennie will be as happy as a pig in mud. By the end of July, when the Wallabies also play England – he will have a clearer picture of the Australian rugby landscape than any Wallabies coach for quite some time. 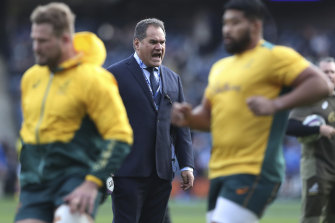 Some blokes are going to step up for Australia A, and some will have a line put through them. And, if there is a player in that under-20s program who could come through in time for France in 2023, Rennie will know who it is after those July games.

Quite simply, it’s all about exposure. Take the Pacific Nations Cup, for example. I’ve spoken to Highlanders players Marino Mikaele-Tu’u and Thomas Umaga-Jensen about their experience of playing the Fijian Drua in Suva in Super Rugby Pacific, and they made it clear it was like nothing else they have encountered. The physicality, the noise, the heat, the humidity, the passion of the home crowd – they regarded the Highlanders win in Suva almost as one against all odds, particularly as they had to come back from an early deficit.

If Fiji get all their players back from Europe for that competition, they will be like the Drua multiplied by 10.

That trip will not be for the faint-hearted for Australia A, and it will be character-building players such as Tane Edmed, Ben Donaldson, Carter Gordon and Reesjan Pasitoa, at least two of whom you would expect to be in the squad. It’s the same for the forwards, with games against Samoa and Tonga also part of the competition. 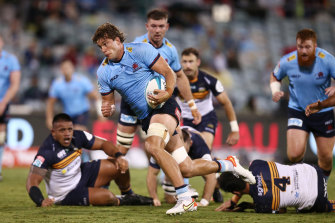 A player like Will Harris has more to gain from an Australia A campaign than a brief Wallabies cameo.Credit:Getty

Players like Waratahs No.8 Will Harris or Reds second-rower Ryan Smith might not crack the Wallabies, but Australia A’s return means they can still keep developing. To be frank, they will learn more by being a full part of Australia A in Fiji than some full-blown Wallabies will if their minutes are scarce during the England series.

And, this is rugby’s great strength. Super Rugby Pacific may frequently be compared to the NRL in an unflattering light – with some justification – but rugby has always been defined by its international aspect. Look at the menu for July. Ireland in New Zealand, England in Australia, Australia A in Fiji against the Pacific Islands nations. It’s a genuine international sport that has suffered more than most because of COVID and the closed borders.

As for the Junior Wallabies, what an opportunity to go against not only their traditional rivals across the ditch and Fiji, but also Argentina.

The inclusion of the Pumas under-20s is a massive boost for the Oceania U20 Championship because they will play the game in a completely different way to what the young Australians are used to.

These are tangible developments that will bring real improvements to the game, and they should stir a sense of excitement among players, coaches and supporters. My strong sense is that July will now be the best the game has experienced since the Rugby World Cup in Japan in 2019.