These are testing times for Mark Evans, who was the highly regarded AFL football boss before he was parachuted into Gold Coast almost five years ago to lead a re-imagining of the game’s most difficult problem child.

Under serious pressure from his chairman Tony Cochrane and AFL chief Gillon McLachlan, Evans knows he has to make changes at the Suns before head office makes them for him. Frankly, it is mystifying that McLachlan’s team has not stepped in before now. 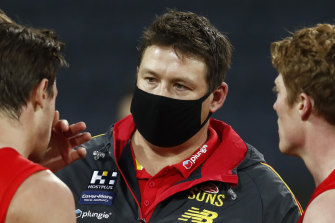 Evans must have known even before he contacted Alastair Clarkson’s management about 10 days ago that the prospect of the four-time premiership coach taking on a mentoring role of the embattled Stuart Dew was as unlikely as it would have proved unhelpful.

Clarkson is a senior coach, not a coaches’ helper, and his presence would have only eroded Dew’s already tenuous standing. Perhaps the approach was prodded by genuine pressure from the AFL starting to kick in.

The Suns have also offered Michael Voss its vacant midfield coaching role, but again this is one small solution to a significantly bigger problem. Having admitted years ago that the establishment of the club was poorly handled, with rookies appointed into all the major roles, surely the club must move to address that once and for all, with senior, established personnel who understand that the Suns cannot be run like a traditional VFL club.

As harsh as this seems, Dew must surely be under some duress to remain in the job, having achieved only seven wins in his fourth season and seemingly lacking the management skills at this stage to be a senior coach in the game’s toughest market, and sport’s most challenging culturally. 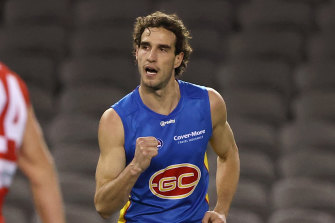 The Suns need to keep young guns such as Ben King.Credit:Getty Images

Ditto football boss Jon Haines, who is widely tipped to depart the club in the coming weeks with Wayne Campbell the favourite to replace him, or potentially list boss Craig Cameron stepping up into the role he held successfully at Richmond before departing the Tigers for a short-lived, ill-fated job in the racing industry.

If the club seems to have reached a decision on the head of football, the senior coach seems line ball with the prospect of Clarkson at the end of a one-year break being available as Dew’s current contract is completed. Frankly, if the club has enough doubts about Dew then to wait another year seems untenable.

Suns defenders say that it’s the club’s messaging that is all wrong and the youthful and inexperienced nature of the list is not promoted heavily enough. That the season was shot when Jarrod Witts went down. But excuses like that won’t retain Ben King. Touk Miller cannot lead all on his own. 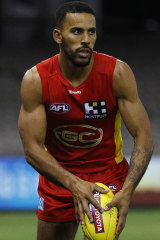 Touk Miller was named to the All-Australian team for the first time.Credit:Getty Images

It’s worth remembering both Clarkson and Damien Hardwick inherited struggling football operations and that Clarkson took Hawthorn into the finals in his third season and Hardwick his fourth. The Brisbane Lions, under significant pressure from the AFL, lost patience with Justin Leppitsch after three poor seasons and that club seemed on its knees before Chris Fagan took only three years to coach the Lions back into September.

And Gold Coast have so many star youngsters coming out of contract in 12 months. The prospect of yet another raft of departures and mis-steps is unthinkable as Jarryd Lyons shapes up for another finals series, Peter Wright his first, and all-Australian Steven May is the third former Suns captain in three years headed for a grand final with another club.

Despite the ongoing struggle to create a quality environment and high-performance culture to retain their stars, Gold Coast are still paying well below the football department soft cap when the traditional challenges facing the club demand so much more support.

This is on the club, but also head office, which would be accused of sleeping at the wheel where the Suns are concerned if not for the challenges and pressure upon management brought on by the pandemic. Still, AFL intervention seems long overdue when you consider that the Lions were hemorrhaging money and under-resourced in Leppitsch’s final season when McLachlan’s team stepped in.

That club’s chief, Greg Swann, selected Chris Fagan to coach the Lions, but it was Evans in his former role and McLachlan who forced David Noble upon Brisbane as the new football boss, so why the league hasn’t stepped in earlier to bolster Gold Coast is difficult to fathom.

McLachlan would have known all year that Clarkson was likely to be available. Ross Lyon has been waiting in the wings, Nathan Buckley departed Collingwood mid-season and Brad Scott, who clearly still has the coaching bug, is a few offices away. Scott still seems an excellent prospect and would provide a more important solution for the competition at the Gold Coast as front man in a market he understands, than remaining at the AFL to oversee football.

Graeme Allan, who has served his penance following the Lachie Whitfield saga, earned his northern market stripes at Brisbane before enhancing his list-building reputation at Greater Western Sydney and yet, his unique skill set, too, has been overlooked where Gold Coast is concerned.

Brisbane-based Andrew Ireland remains tied to the Sydney Swans and surely must be earmarked for a role on the AFL Commission later this year, but why the knowledge he built over three decades of pioneering brilliance was never tapped where the Suns are concerned is another for the opportunity lost department.

Ireland would have proved a game changer as an executive chairman of Gold Coast, but that is not a role he would likely take on now. Still, to think he was commandeered on to the Australian Sports Commission and not the AFL Commission as soon he retired as Swans CEO still rankles with most clubs, and the AFL’s surviving forefathers.

But reflecting on lost opportunities is not the point, except that you would hope that the AFL will learn from them and that the Gold Coast penny will finally drop. The competition is committed to the Suns, despite their massive financial drain, and so it must act strongly and radically, mindful of the valuable football years the club’s botched creation has taken from so many brilliant young players and all those stars it has lost.

Tags: AFL, needs, take, THE, to, urge, Why
You may also like
Latest Posts