It’s all rather dubious that in the end it came down to money. It just doesn’t make any sense that the threshold issue in the question of whether NSW Police Commissioner Mick Fuller could be appointed as a director of the Australian Rugby League Commission was the payment of a $75,000 director’s fee.

The ARLC’s corporate constitution expressly states that its directors (of which there are a maximum of eight, but not so many right now) can be paid an aggregate of $750,000 each year. It isn’t mandated how that is divided. The only reason there’s any figure in the constitution is to ensure directors can’t pay themselves more. 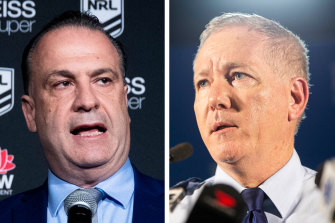 In 1997, the Wood Royal Commission into the then-NSW Police Service acknowledged that while it was fair for serving police to have some limited opportunities for secondary employment, certain lines of work should be excluded in all circumstances. These include areas where police have an ongoing regulatory interface; industries such as private investigators, pubs, security businesses and gaming and racing.

Any serving officer apart from the Commissioner himself must seek the Commissioner’s express approval before engaging in any paid “employment” outside their duties as a sworn officer. The Commissioner, meantime, must obtain permission from higher up the governmental food chain.
Obviously, that permission has now been refused. It should be noted though, that being appointed as a director of the ARLC doesn’t constitute “employment”, regardless of whether a director’s fee is involved.

The essential starting point is that appointing the serving Police Commissioner as an ARLC director is a step which simply can’t ever be taken, and shouldn’t ever have been seriously contemplated. That’s because the appointment wouldn’t be in the overall best interests of the ARLC, the NSW Police Force, or the people of NSW. And, moreover, the appointment might well have placed Fuller himself in various, especially difficult scenarios, emanating from difficult conflicts of interest between his public duties and his fiduciary duties as director of the high profile organisation. Say Fuller was appointed as an ARLC director. Say also, that in six months, NSW Police establish a strikeforce investigation into the increasing infiltration of the game by known organised crime identities.

Say the scope of the investigation focuses also on certain players allegedly “consorting” with known outlaw motorcycle gang members and their associates, and the players’ routine disclosure of “inside information” to those OMCG figures, for gambling purposes. Throw in some match fixing allegations.

‘The essential problem is that appointing the Police Commissioner as a director of the ARLC puts him in a personally impossible position.’

For context, section 93X(1) of the NSW Crimes Act says that a person, who “habitually consorts” with “convicted offenders”, AND continues to do so after having been given an “official warning” in relation to each of those convicted offenders, commits a crime. Section 193Q(2) deals with the disclosure of “inside information” for corrupt betting purposes.

Suppose some players were “leaking” information (maybe secret injury information about key players, or even themselves), where they know that information is being used by organised crime syndicates to “game the odds” in otherwise legal betting markets. That itself is a crime, committed by the player.

Now say the strikeforce has a covert investigation running. One can safely assume that the Police Commissioner would know about such matters.

But it’s absolutely not the case that, just because the Police Commissioner is also a director of the ARLC, it creates a porthole through which the whole commission could gaze at the intelligence gathered, even on a limited and highly redacted basis.

How then could the Police Commissioner keep paramount his obligations as a sworn officer, in order to maintain the integrity and necessary secrecy of the criminal investigation, AND at the same time meet his fiduciary duties owed as a director of the peak governing body of the sport the investigation is focused on? It’s an impossible situation.

In those circumstances, it’s likely that Fuller would be placed in an entirely invidious position, whereby he’d be unable to disclose information known to him. Such information which, if disclosed to the ARLC, would enable the ARLC to take necessary steps to protect the integrity of the sport and its commercial relationships.

Maybe there are serious concerns within the ARLC about the links between its players and “organised crime” types. It may also be perceived, at least, that a way to sever those links is to appoint the Police Commissioner as a director to gain the obvious benefit of decades of knowledge and expertise.

The essential problem, though, is that appointing the Police Commissioner as a director of the ARLC puts him in a personally impossible position, where the ARLC might not even have a snowball’s chance of achieving the outcomes that the appointment would seek to secure. And it doesn’t get the ARLC much closer to eliminating the “organised crime links” it says exists.

Tags: case, Curious, Fuller, of, THE, Why
You may also like
Latest Posts