There is a stoicism about Brad Wilkin that his Melbourne Rebels teammates love.

The New South Wales-raised flanker has had the sort of injury-riddled career that would have sent almost any other young player out of the game and into the workforce after three knee reconstructions including one in mid-2019 which saw him endure a 495-day break between games. 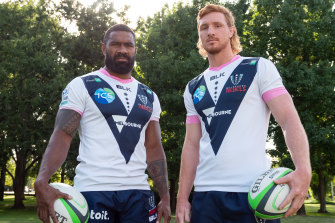 Brad Wilkin, right, has earned the respect of his teammates at Melbourne Rebels and been promoted to the leadership group along with Marika Koroibete, left.

Wilkin made his Rebels return midway through last year’s COVID-19 ravaged season and ended the campaign as one of the team’s most consistent players.

This off-season he has further emerged as one of the team’s leaders and this was made official when he was elevated to the five-man leadership group for 2021 behind captain Dane Haylett-Petty and vice-captain Matt To’omua.

“He is a man of few words but he leads with his actions,” Rebels coach Dave Wessels said.

“He holds a lot of gravitas in the group, when he does speak, people listen and they want to follow.

With Haylett-Petty out for Melbourne’s season-opener against Queensland Reds in Brisbane on Friday night, Wilkin will serve as vice-captain to To’omua.

“It’s quite a big deal for me,” Wilkin said.

“It’s an honour to be held within that regard in the team and the organisation. I didn’t quite expect it and didn’t see it as a possibility.

“It has been a little bit of a journey over the past few years to getting back to play footy last year and having a good bit of continuity now.”

Wessels has watched Wilkin as he grappled with his serious injuries and remained committed to playing again.

“The guy has shown real resilience. What endears him to the squad is the fact he does all that with such a positive attitude.

“Guys want to see him go well because they know everything he has been through. He has trained well and I think he will have a really good season.”

Wilkin has always had faith his abilities were good enough to play at the highest level and press for Wallabies selection but he knows he needs a full season to prove himself.

“I have a lot of belief in my own ability, if I can just perform consistently the rest will take care of itself,” Wilkin said.

“Without a doubt it [the Wallabies] is on my mind but I’m looking to play consistent footy week in, week out and to play to the best of my ability.”

Wessels has no doubt Wilkin and several of his emerging players could put their names forward as the nation progresses towards the 2023 Rugby World Cup in France.

“The reality is you first have to perform at a Super Rugby level consistently to get that opportunity,” Wessels said.

“I know Brad well enough that that will be his focus now.”

Wilkin’s willpower extends to his neat mullet which is remained since last year despite protests from loved ones.

“It’s still hanging around at the moment despite numerous family members and close friends telling me to do otherwise,” Wilkin said.

“It’s something unique for me and the more people telling me to change it, the more likely I am to keep it.”

Melbourne Rebels play Queensland Reds in Brisbane on Friday at 7.45pm AEDT and will be live on Stan Sport.

Tags: for, lead, Rebe, takes, THE, Wilkin
You may also like
Latest Posts