Dave Rennie is preparing to ring the changes for the deciding Test against England on Saturday, with Queensland No.8 Harry Wilson set to be named.

It will be Wilson’s first start this season and comes with some intrigue, with the Wallabies vague on whether he will start in his preferred No.8 jersey or elsewhere in the back row.

The move, expected to be confirmed when Dave Rennie names his team later on Thursday, suggests that No.6 Rob Leota has been moved into the second row or onto the bench as second-row cover after an injury to Cadeyrn Neville and with Darcy Swain still facing a week out suspended.

Wilson could start in his place, with Rob Valetini moving to No.6, or Valetini could stay at the back of the scrum, with the 10-Test Queenslander starting in the blindside position.

The back-row reshuffle could mean Test rookie Nick Frost, who made his debut in the 25-17 loss in Brisbane, starts in the second row alongside Matt Philip. Leota and Samu would provide cover on the bench, unless Rennie decides to start Leota.

Partly a forced change, given the injury toll in the second row, Wilson’s call-up could also be read as a response to consecutive poor starts from Australia. 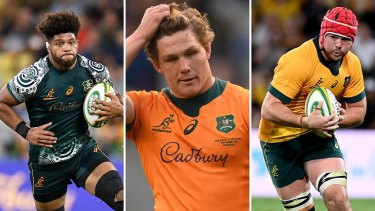 Could this be the Wallabies back row for the deciding Test against England? Pictured are Rob Valetini, Michael Hooper and Harry Wilson.Credit:Getty

The Wallabies trailed England on the scoreboard in the first Test before fighting back for a courageous win, and were outmuscled in Brisbane, allowing Eddie Jones’s side to sprint to a 19-0 lead in the first half.

Forwards coach Dan McKellar was at a loss to explain Australia’s poor start in the second Test, which was typified when England prop Ellis Genge sent Wallabies captain Michael Hooper flying in the opening stages.

But McKellar admitted the Wallabies were down on “intent and accuracy”.

“For the most part it’s pretty random, crystal ball stuff. Do you have the ball, are you defending – the bounce of the ball can go against you,” he said. 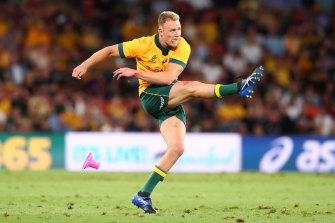 Reece Hodge could be in contention for a spot in the 23 after multiple injuries to fullback options.Credit:Getty Images

“So what you’ve got to make sure you can bring is intent and accuracy. If you’ve got that, on both sides of the ball, then you give yourself a chance to start well.

“We start our training sessions nice and fast knowing you can’t ease your way into a game. Intent and accuracy are critical in those first couple of passages and that’s probably where we were down a little bit on Saturday night in Brisbane.”

The Wallabies were forced to call in departing Reds second-rower Lukhan Salakaia-Loto as cover after Jed Holloway and Ned Hanigan were also ruled out of contention. Australia’s outside back stocks have been hit hard as well, with three fullback options going down over the past two weeks.

McKellar said getting through the series was a squad-wide effort as Australia prepared to take into action their third different second-row combination and fourth fullback. Reece Hodge was added as injury cover after the first Test, while the Brumbies’ Tom Wright is also an option.

“What makes it seamless is the preparation you’ve done over the last three or four weeks and understanding that whoever’s played has, for the most part, been heavily involved in that preparation over that period of time,” he said.

“You can’t be throwing all your eggs in one basket with players, thinking they’ll just get through a series. The game’s played at an incredibly high intensity these days, very physical.

“Sadly we’re seeing more and more injuries – we’ve been unlucky in that area – and every now and then you’ll get clusters of them in a position, but you’ve got to make sure your whole squad is well-prepared and ready to step up if required. In the current environment we’re in, your 23 can change overnight so everyone needs to be well across the detail and plan, and individually prepared well, to play at the drop of a hat. We saw that with [five eighth Noah Lolesio] in Perth.”

Meanwhile, Stan Sport and Nine, publisher of the Herald, look set to land the broadcast rights for the 2023 Rugby World Cup and 2022 women’s World Cup.