Melbourne chairman Matt Tripp has doubled down on his criticism of Penrith, launching an extraordinary attack on the premiers in which he accused them of “arrogance” before their clash on Thursday.

Storm officials are still seething at Greg Alexander’s claim that the club invented all the dangerous tackling techniques that have infiltrated the game in the past two decades. The stoush emanated from barbs between deputy Panthers chairman Alexander and long-time Melbourne captain Cameron Smith on SEN radio, prompting Tripp to leap to the Storm’s defence.

“You can say a lot of things about the Melbourne Storm, but the one thing they can’t be accused of is being arrogant,” Tripp told The Age and The Sun-Herald. “We go about our business and don’t make outlandish comments – we respond to comments, but you won’t see us on the front foot making stupid comments, particularly about other clubs and their tactics.

“So for the deputy chair of one of our biggest competitors, a week out from having to play them, to make unfounded and stupid comments as he has done, just goes to the arrogance of that club and their perceived status in the game at the moment.”

Penrith host Melbourne on Thursday night in a clash that could determine whether the former win the minor premiership and the latter secure a top-four spot. The incendiary comments from Alexander will ensure there is no love lost between the 2020 grand finalists.

“It’s borderline defamatory – it’s not on,” Tripp said. “To abuse his position as a journalist as well as being deputy chair of a football club in our game is beyond unacceptable. I can’t believe that his continued witch hunt for us for over 20 years still goes on to this day. 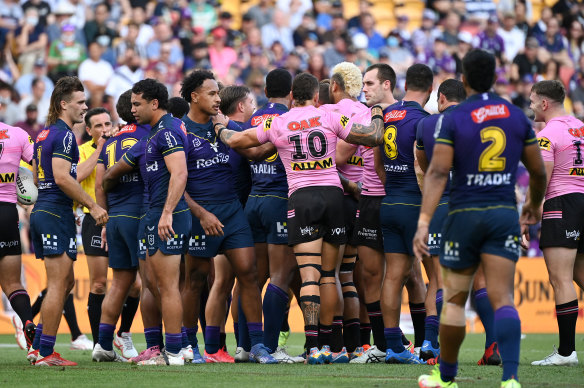 Penrith and Melbourne will be fired up for their clash on Thursday.Credit:NRL Photos

“I am singling him out because I don’t believe it’s a Sydney-Melbourne thing. In recent times I think there has been a great balance in journalists and their assessment of not only the Melbourne Storm but the game at large – they call it as they see it.

“But the one exception to that is Greg Alexander; he thinks the game doesn’t exist south of the Murray River.

“When you consider the amount of supporters and members we have, and the eyeballs we attract in broadcast, [would that happen] if we played an ugly and illegal brand of footy?

“To suggest that we do is both unfounded and incorrect.”

‘To make unfounded and stupid comments … just goes to the arrogance of that club and their perceived status in the game at the moment.’

Speaking on air on Friday, Alexander said: “I think history shows – and it’s not a stretch for me to jump to a Melbourne Storm conclusion – that the grapple, the chicken wing, the rolling pin, the crusher, the hip drop, I think they all emanate out of Melbourne.”

Tripp believes the comments were timed for maximum effect; to influence referees before the big season-ending games.

“The timing for him couldn’t be better,” Tripp said. “It’s a week out from playing one of his biggest threats in the competition, and now he has come out to throw rocks at them. If that’s not abusing your position of power, I don’t know what is.

“He gets paid to have an opinion, to produce rubbish clickbait, and he’s done a good job of that on this occasion by creating a stir over something that isn’t true.

“In a paid job when you make stupid comments like that, you should be held accountable.”

Storm hooker Brandon Smith escaped suspension for a hip-drop tackle on Gold Coast’s Tino Fa’asuamaleaui on Friday night. Playing his first game back from a three-match suspension for referee dissent, Smith was placed on report for the tackle during the win but was permitted to remain on the field.

Unlike most hip drops, Smith was the second man into the tackle, not the third, and appeared to slide onto Fa’asuamaleaui’s legs rather than make a concerted effort to tackle them.

Fa’asuamaleaui left the field after the tackle but later returned to play. The match review committee imposed a grade-one dangerous contact charge, which carries a $1800 fine if Smith takes an early plea.

Smith’s tackle comes after a week of headlines concerning hip-drop tackles, which have the potential to cause serious leg injuries. Brisbane’s Patrick Carrigan was referred directly to the judiciary and banned for four weeks for a hip-drop tackle that broke Jackson Hastings’ fibula in a loss to the Wests Tigers.