The first Women in League Round was held back in 2007 in a very different rugby league landscape.

Very few people knew there was an Australian women’s team named the Jillaroos and the idea of an NRL Women’s Premiership was a nothing more than a dream. The game was still a decade away from its first female contracted player and 12 years away from having a woman officiate a first-grade men’s game.

While women were involved in the administration and coverage of the game, the Women in League Round symbolised an opportunity to thank the women involved in the rugby league family, particularly fans, mothers on the sideline cheering on their sons and volunteers at local clubs.

These women still remain fundamental to the fabric of the game, but 12 years later there are so many more visible and game-changing women to celebrate including players like Kezie Apps and Tiana Penitani, referees like Kasey Badger and Belinda Sharpe, women in media like Emma Lawrence, Alicia Newton and Ruan Sims and women in leadership like Professor Megan Davis and Rebecca Frizelle.

My response is always that the round remains as relevant as ever. But it’s time we take it up a notch. 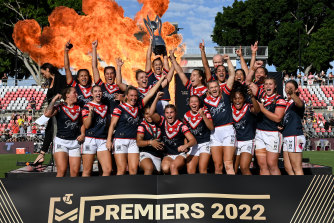 Expansion of the NRLW competition is not the be-all and end-all of elevating the position of women in the game.Credit:NRL Photos

Celebration of the progress made is fitting this week, but if rugby league is serious about being the No.1 female sport in the country, then it’s time to start having some tough conversations and addressing the real challenges that women face in the game.

These conversations should be led by women too, so if you are holding a Women in League event this week as the NRL did and the first two speakers are male, you may have missed the point.

Let’s start with some of the more obvious challenges.

Elite performance is expected from women, but the players who compete in the NRLW are not full-time professional athletes. If you think the quality of footy is good now, imagine what it will look like when these athletes can focus on their craft full-time and no longer be forced to exist in financial insecurity just to play the game that they love. 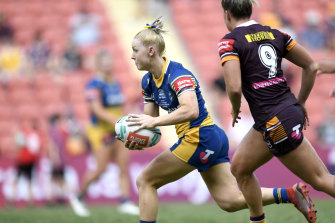 Some examples of the incredible commitment include Brisbane Broncos player Lavinia Gould, who starts her day at 4am as a crane driver. She works, juggles a family and footy, arrives home at 11pm and then does it all over again. Rikeya Horne works as a prison guard. After the Parramatta Eels’ first ever NRLW game, she drove back home from Newcastle, had a quick nap and then woke up to start her midnight shift.

While there is an opportunity to celebrate the expansion of the women’s game, other considerations must be explored too.

It’s not just about pay.

We must ensure these athletes have access to appropriate facilities and do not have to share dressing rooms before big games so there are enough bathrooms. Dedicated facilities are required so teams do not have to train in three separate locations before match day.

How much longer is it going to be before I hear a woman as a lead caller for a footy game?

Medical support is critical as is continued research into the female body. We have only just started considering the impact of menstruation on performance. While concussion management has been a key priority in men’s sport recently, is the same rigour being applied to women’s sport?

Women may be present in our board rooms and our clubs, but how are we challenging and fostering the next generation of women to ensure that this presence continues to grow.

And how much longer is it going to be before I hear a woman as a lead caller for a footy game?

These conversations can be uncomfortable and challenging. Often there is no easy answer. That is an even bigger reason to have them.

In a separate issue this week, which saw seven Manly Sea Eagles players stand down and refuse to wear the club’s ‘Everyone in League’ jersey on Thursday night, we saw the impact of not having tough conversations.

In a press conference on Tuesday, Manly captain Daly Cherry-Evans said, “stuff like this isn’t a topic of conversation unless put in the situation, so we are experiencing a lot of things for the first time as a playing group.”

We cannot ignore the challenges that women in rugby league are facing or wait for them to be in front of us before we start to address them. The game has an opportunity to be a leader and forward facing, rather than simply focusing on the past and how far we have come.

If rugby league truly wants to be the No.1 female sport in Australia, it’s time to lean in, not out of these conversations, no matter how uncomfortable.

What better opportunity to do so than during Women in League Round?