The Jillaroos will turn to Emma Tonegato and Shaylee Bent to fill the void after two of the NRLW’s biggest stars pulled out of the World Cup, in a reminder of the stark reality for women juggling rugby league and work.

The decision by Millie Boyle and Tamika Upton to withdraw from the squad means Australia will lose two of their best players barely 24 hours after they were selected for next month’s World Cup.

Boyle opted to prioritise work, deciding to use the off-season to plan programs for her business which works with people living with disabilities. Upton, who won the Karyn Murphy Medal in Newcastle’s NRLW grand final win, withdrew due to the calf injury she carried into the finals.

“Until the game is professional, and they’re not needing to do work and other things in their lives, this [withdrawals] will happen,” Jillaroos coach Brad Donald told the Herald.

“In 2017, that was the first year they were getting paid [for a World Cup] and they got paid $3000. I know the NRL hierarchy and the [ARL] commission are working really hard with the RLPA to make sure it’s not $3000 for a month’s work.

“[Boyle] was quite upset but she is also very excited about where her life is going at the moment. She’s got Adam [Elliott] moving to town, she’s got the club supporting her with her business, she really wants to get the business up and running and the next couple of months are key for her. We always say that you’re human first. 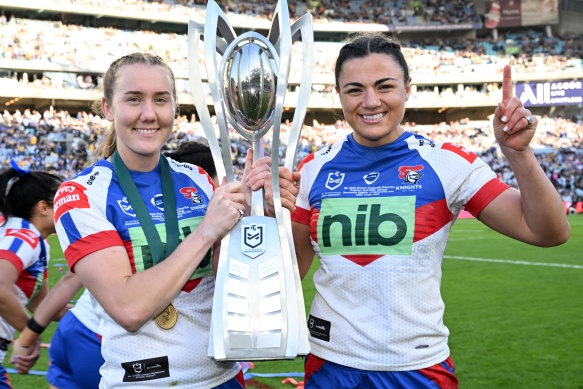 “[Boyle’s situation] is no different to Tiana Penitani, she gave me a ring a couple of weeks’ back and she had organised her wedding around [the World Cup] happening last year. She had to pull out too and would have been a good chance given how good she was going before she got injured.”

Donald said the decision to draft Tonegato into the squad was “a no-brainer”. The St George Illawarra fullback will compete with new Jillaroos co-captain Sam Bremner for the No.1 jersey at the World Cup in the UK.

Bent plays in the second row for the Dragons, meaning she isn’t a like-for-like replacement for Boyle, but Donald is confident his squad is balanced enough to handle losing the game’s premier prop before the tournament gets under way against the Cook Islands on November 3 [AEDT].

“I am extremely grateful to be selected to such an amazing Jillaroos squad. Unfortunately, due to my work commitments with @_trainergroup it isn’t possible for me to be away for the period of time required overseas,” Boyle posted in an Instagram story on Tuesday.

“This year has been amazing presenting our inclusive programs across the NRL, but a challenge juggling football commitments at the same time. I will therefore be using the off-season to work on new programs and planning out a massive 2023 for our participants.

“I am obviously upset I won’t be able to experience the World Cup, but will be cheering on the girls every step of the way!”