Essendon coach John Worsfold is confident players are not putting their health at risk by playing round one behind closed doors as the Bombers gear up to face Fremantle at Marvel Stadium.

Speaking at a media conference conducted via video link up, Worsfold said he was comfortable with advice the club had been given and that his players were primed to put on a good show on Saturday.

"We have been communicated to really clearly," Worsfold said. 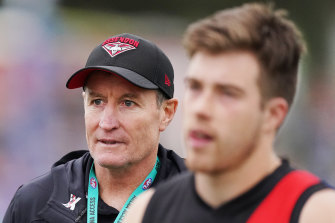 "One of the big risk factors is being in obviously very crowded, enclosed spaces and that is not going to be the case when we play this week. With the screenings and the doctors' checks on all the players that are taking part you would like to think it as safe as anywhere else you could possibly be."

He said having access to players outside the list would assist in dealing with shorter quarters and breaks, adding he could imagine the games in round one being played in a familiar style.

Worsfold conceded that with more changes than normal likely – if games were played in quick succession – the Bombers might look different in future rounds.

He said ruckman Tom Bellchambers would be available for selection in round one with Essendon likely to weigh up whether to take two ruckmen into the clash against Fremantle as recruit Andrew Phillips was very good against Geelong at Colac last Monday.

Bellchambers had been looking at a program that would allow him to get through a 22-round home and away season but with the 2020 season now reduced to 17 games plus finals the Bombers would re-evaluate.

Conor McKenna – who had a break in Ireland during February – will also be available for selection after returning and playing a VFL game against Geelong, while Jake Stringer is a certain starter having missed the final Marsh Series match for personal reasons.

Worsfold said McKenna's position would be discussed at match committee.

"He looks really fresh and ready to go but we will just weigh up and [see] whether we think he is ready to step in and play in the senior side this week," he said.

Worsfold admitted the measures being implemented to slow the spread of coronavirus made the year different as things could change any minute. However, he said the group was upbeat and ready to play.

"We're gearing up to play but we also know that possibly things could change but there is no use worrying about that. If that happens it will happen," Worsfold said.