We’re against racism, on that we all agree. Half-way through the Sir Doug Nicholls round in the AFL, we’re so very against it. But what exactly are we against? Racism flickers at the edge of white people’s consciousness, but for those who aren’t Caucasian, it is an everyday, in-your-face reality.

For former Essendon footballer Nathan Lovett-Murray, it is the memory of constantly finding himself in fights at school without knowing why. At nearly 40, it burns still. 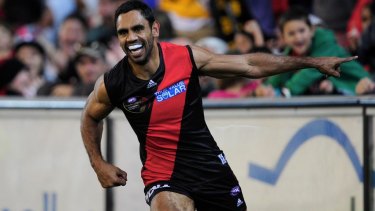 She doesn’t ride trams or trains, knowing she will be shunned, nor carry a backpack when she goes out, knowing it will be searched.

For Melbourne Storm star Josh Addo-Carr and pro-surfer Otis Hope Carey, it is the sense of feeling the same as everyone else, but always being treated differently.

Richmond’s Bachar Houli knows it. “We’re human beings,” he says, holding out his arms as if to ask why some people can’t see it. “Colour? Really?”

This chimes with Olympian and former federal senator Nova Peris. “F—! Why can’t people just see us for what we are are?” she asks.

This question slowly came into focus for documentary maker Peter Dickson when he was approached last year by Lovett-Murray in his capacity as St Kilda’s development coach to make a film about Nicky Winmar.

Initially, Dickson wondered what more could be said. But Lovett-Murray was persistent. It was he who, mid pandemic, was able to drum up some modest funding from VicHealth and drove the project from there. He’s credited as executive producer. 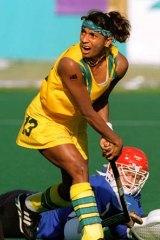 Winmar is muse and thread, but the strength of The Ripple Effect is the way it puts the viewer in the everyday shoes and boots of Australians who aren’t Caucasian, sportspeople as it happens, but representatives, too. You can only squirm.

Dickson says that as a white man, it took him aback. “Emotionally, it took it out of me,” he says. “That’s me, not even Indigenous. I was just listening; they’re living it.”

There’s overt racism, plenty of it. It shocked Chuot, who spent the first 12 years of her life in a refugee camp in Kenya, where there were problems, but not this one.

When Peris lobbed at her first Australian under-18 hockey tournament and made to shake a hand, she was told: “I’m not shaking that black bitch’s hand.” It wasn’t so long ago.

Carey returned to his car one day after a surf to find inscribed in the dust on the back window of his car: “F— off abo.” That was very recent.

There’s casual racism. “You’re not too bad,” the young and promising Lovett-Murray was told one day at Essendon. “You’re a good Aboriginal.” It wasn’t so long ago, either.

There’s the cesspit of social media; most avoid it. There’s the way racism weighs and oppresses, the way it leads to equally destructive coping mechanisms, the ripple effect. 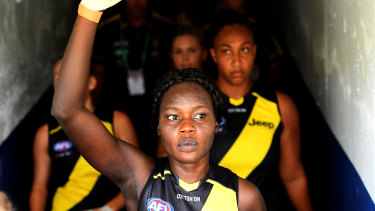 It’s always there. “It’s that kind of anxiety where you’re always on the look-out,” says Chuot. “You’re always ready.”

Even the winning battles take their toll. “You’ve changed my life,” Winmar says one day in a pub to Wayne Ludbey, the photographer who immortalised Winmar’s defiant Victoria Park image, “but you have to realise I relive that moment over and over again.” It was 28 years ago. 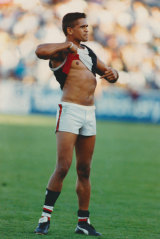 It’s heavy going, and yet there is a filament of hope. Ben Long, drafted to St Kilda from Darwin via Melbourne Grammar’s boarding house, says he has not experienced racism in footy. Surfer Carey feels his art is helping to bridge the divide. Houli, despite all, pins faith in humanity. “I’m not going to put a statistic on it,” he says, “but the majority of people out there truly care.”

Or one day will. “All right, some people won’t, I get that,” says Lovett-Murray. “But their kids are going to get it. A new generation is going to come through and they’re not going to stand for racism any more.”

A similar hope was invested in the previous generation, post-Winmar. It made progress, but not as much as it perhaps imagines. It is easy for whites in their detached world to imagine it.

That’s why Dickson thinks The Ripple Effect, despite its modest budget and low profile, matters. “It’s one of the most important things I’ve done,” he says. He has cut a 15-minute version which Lovett-Murray aims to take into schools.

All the principals in The Ripple Effect want is to be able to feel as comfortable in their skins as whites do in theirs. Addo-Carr does. “Our skin colour is our identity now,” he says. “Our features … our black skinny legs … if you think of a black fella, you think of his legs, skinny, fast.” He roars laughing. 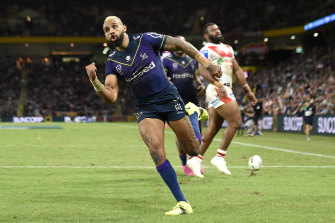 How will we know when racism is a thing of the past? This is not in the doco, but speaks to it. Last year on The Project, Chuot was asked what question she would most like to be asked. After a pause, she said: “What footy team do you barrack for?”

Tags: 'You, don’t, Ever, guard, let, your
You may also like
Latest Posts