When the Western Bulldogs flew to Perth for a 2016 elimination final, few gave the visitors much chance of advancing past West Coast. A four-goal first term and handy early lead gave the Bulldogs belief and, by game’s end, they enjoyed a 47-point win. The spark for what became a breakthrough flag had been lit.

Six years on, and the Bulldogs are again heading west for an elimination final, this time against Fremantle but without one of their prime movers, the injured Tom Liberatore. They were something akin to the Leyland Brothers through a pandemic-impacted September last year, but can they muster another run on the road?

“Once you get to this point [of the season], it becomes something totally different. A thought turns into belief, embracing that. If you all don’t think you are truly capable, then you are no chance,” premiership coach Luke Beveridge said.

Aaron Naughton, preparing for 100th game, echoed that belief through the week.

“You probably draw on those finals experiences and those wins and see that we are capable of doing that,” Naughton said.

What is clear is that Bulldogs need the man dubbed “The Astronaut” to take flight if they are to prevail. 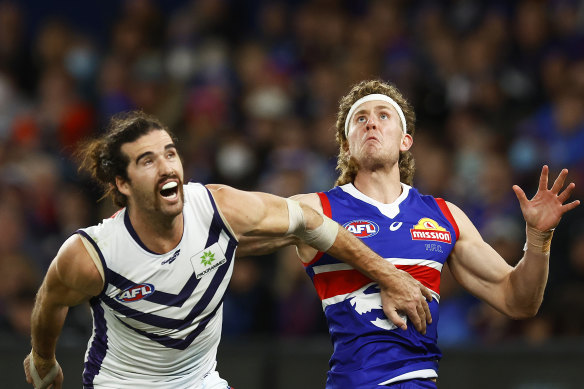 Battle of the big men: Aaron Naughton and Alex Pearce are likely to be direct opponents at Optus Stadium on Saturday night.Credit:Getty Images

Naughton, a Perth local, once played for the Dockers’ feeder team, Peel Thunder, but this weekend hopes to break purple hearts. And if there is one Bulldog capable of that, it’s the star forward Beveridge this week said would have a tape of his career highlights compiled to honour a major milestone.

“We’ll recognise him for the character that he has been at our football club, and the young juggernaut that he has presented as a forward, and led the charge over the last few years,” Beveridge said.

Naughton, 22, is a young “juggernaut”, reaffirming his development with a career-high 51 goals this season. While he spent the first 18 games of his career as a defender, having been drafted in 2017 (ninth overall) to fill that role, he has since shown he is on par with modern greats Tom Hawkins and Jack Riewoldt, and Tom Lynch, heading towards that category, through their opening 100 games. 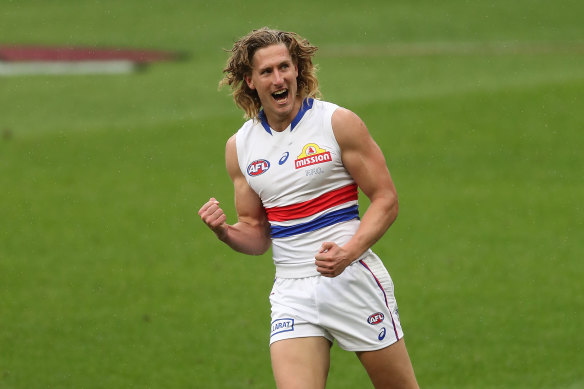 Aaron Naughton’s importance is underlined in that he was fifth for total scoreboard impact this season.Credit:Getty Images

Of that quartet, Lynch averaged the most overall marks (6.4) in his first 100 games but Naughton (5.2) cannot be separated from Riewoldt (5.4) and Hawkins (5.6). In contested marks, Naughton, renowned for his excellent balance leaping into a pack, averages 2.2, bettered only by Lynch.

When it comes to goals, Naughton averages 1.8 per game, better than Hawkins (1.7), but behind Riewoldt (2.5) and Lynch (2.1). However, this year he has averaged a career-high 2.4 goals, finishing goalless just twice while kicking at least three in 10 games.

His importance is underlined in the fact he ranks fifth overall for total scoreboard impact, behind only Peter Wright, Jeremy Cameron, Coleman medallist Charlie Curnow and Hawkins.

The Bulldogs look for the headband-wearing tall as often as possible, for he has been the inside-50 target almost 27 per cent of the time. That’s understandable, for it’s been only in the past six weeks that fellow tall Jamarra Ugle-Hagan has been an importance presence, while Josh Bruce – who had enjoyed a fine partnership with Naughton until wrecking his knee late last year – has struggled and is again out of the side.

Naughton, despite having his own knee issues, pushed on through 21 games. He said he enjoyed the weekend off through the pre-finals bye.

“I’m probably one for the bye this year. I’m a little bit sore so it was good to freshen up and I think a lot of boys were like that,” Naughton said.

“[My body] is a lot better than halfway through the year. I managed to get rid of the knee tape, which is nice. It’s feeling really good now.”

He likely faces a match up on the robust Alex Pearce, but should be confident. He had three goals when the teams last met at Marvel Stadium in round 21, although the Bulldogs were beaten, and had 13 marks (but only 1.5) when the teams met at Optus Stadium last year.

His accuracy in front of goal can be an issue – he has 33 points this season – but his shot-at-goal accuracy of 53.7 per cent this year is the second best of his career. Importantly, as Wayne Carey has noted, he has “learned other tricks and can kick goals in other ways”.

“More than a mark-kick forward, he’s become dangerous at ground level and backs it up with second and third efforts,” Carey wrote in The Age.

Naughton says the highlight of his career to date was last season’s grand final run, ended only by Melbourne’s third-term onslaught.

“Obviously, last year, the finals series, to win a couple of finals, to fall one short was a little bit disappointing, but to get that exposure in some pretty big games was the highlight,” he said.

Now comes that chance to go one better.