It was a strange choice of venue for a revolution in football to begin, but on Spennymoor Town’s Brewery Field in the north-east of England there was a glimpse of what the world’s most popular game could look like without headers.

The fact the first goal of the match, which ended in a 5-5 goal-fest, was scored by a player using his head proves that is not entirely accurate. 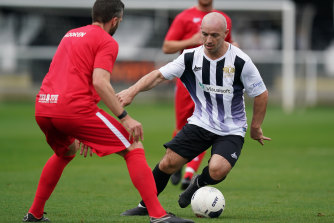 Action from a charity match at Spennymoor, in the north-east of England, which was played with new rules designed to restrict heading.Credit:Getty

But on a sunny Sunday afternoon, in front of 390 people, in a friendly game between former players from Middlesbrough and Spennymoor, who are in England’s sixth tier, two new versions of the game were trialled.

This was football without heading, or at least football where you can only head the ball inside the penalty area – and it could well be the most radical thing to happen to the sport since the 12 founder members of the Football League agreed to play each other 133 years ago.

It is not a gimmick, rather a serious attempt to alter the way football is played to protect those who play it. It is a starting point for a conversation and an attempt to prove change can happen without diminishing the game.

For some, the very thought of such a dramatic alteration to the way the game is played will be an affront. You cannot remove heading without fundamentally changing the game, and not for the better.

But for the rest of us this is a controversy that must be tackled, for want of a better phrase, head on. The debate is not whether heading a ball is bad for your brain, because it unquestionably is, it is what can be done to lessen that damage.

The weight of evidence is impossible to ignore. Research published by Professor Willie Stewart at Glasgow University found footballers were five times more likely to suffer dementia than the general population, due to the devastating effects of repeatedly heading a football.

Organised by charities Head for Change and the Solan Connor Fawcett Trust, the trial match was the first serious attempt to show what the game would look like if the amount of heading was either reduced or removed completely. It was an important first step, a practical experiment in front of a live audience.

And it worked. In the first half, in particular, you barely noticed the difference. With headers allowed only in either penalty area, you still had a goal threat from crosses, corners and set-pieces. Long balls were still played forward for attackers to run on to. 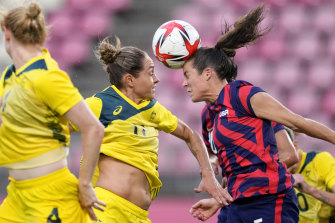 Australia’s Mary Fowler and Kelley O’Hara of the US in an aerial battle at the Tokyo Olympics.Credit:AP

In fact, when Team Middlesbrough opened the scoring midway through the first half, it came from the head of James Marwood, son of the former Arsenal player Brian.

It came minutes after Team Spennymoor hit a post with a diving header by Gavin Cogdon.

Only once in the first half did someone forget the new rules, using their head to cut out a long ball forward, resulting in a free-kick to the opposition, against a backdrop of laughter from the crowd.

In the second half, the change to the rules was far more apparent. In truth, the spectacle suffered. With no heading at all allowed, there was a lot of short passing and it made defending easier without the threat of high crosses from the flanks. It was too much like five-a-side football. You suspect it would be too much for fans to accept.

‘The time for action is now … there are too many former players who are no longer with us because of neurodegenerative disease.’

“We wanted to raise awareness for discussion about what the future of the game might look like,” said Head for Change co-founder Dr Judith Gates, whose husband Bill played for both clubs and has a neurodegenerative condition. “This was a game that will go down in history, the first 11-a-side game played by adults with heading restricted, and it took place in my home town of Spennymoor.

“This is merely intended to be the starting point of a much wider conversation. The time for action is now, the weight of evidence from the studies in this country and the USA means we can no longer ignore this.

“There are too many former players who are no longer with us because of neurodegenerative disease. My husband Bill is here today, but he will not remember it tomorrow. We have to protect the players of the future.”

In the first half, not much. With headers still allowed in the penalty area, the game retained all the same threats from long balls, crosses, corners and free-kicks. All that was different is that long balls played forward normally had to bounce before they were touched, which led to more football being played on the floor. The game did not seem radically different. In the second half, with headers removed completely, the spectacle suffered. Without the threat of high crosses into the area, defending seemed easier. There was too much predictable short passing and both sides struggled to create openings when they got down the flanks.

Did it have an impact?

In the second half, the game suffered. There was a lot of short passing and the game seemed to slow as a result. These were retired players performing at a relatively slow pace, but with professional athletes, defending will become a lot easier without the variation of being able to hit a high ball into the area for a striker to attack with their head. Corners would become almost pointless as would free kicks in the final third, making cynical fouls to stop attacks far more effective and, therefore, likely to become more common.

Was it a success?

Yes, it highlighted how easy it would be to remove the need for players to head the ball outside of the penalty area, which would stop goalkeepers and defenders launching long, high balls forward for defenders and attackers to compete for in the air. The impact of that type of header is likely to be the most damaging to the brain. At the very least, this should move the conversation forward. It suggests changes could be made to the heading laws without ruining the game, for both those who play and watch it.

This match was not intended to force the game’s governing bodies to change the laws and neither of the charities involved said they wanted to remove heading completely. The point of this was to raise awareness and to form a reference point as to what the game might look like if the heading laws were changed to protect players.