Cristiano Ronaldo once said he was the ‘first, second and third best player’ and made sly digs over Messi’s no-show at FIFA Awards… backing claims Argentine ‘STOLE’ the Ballon d’Or is just the latest swipe in a long rivalry between the superstars

Cristiano Ronaldo added another chapter to his long and storied rivalry with Lionel Messi on Wednesday when he sensationally backed claims that the Argentine ‘stole’ the 2021 Ballon d’Or from him.

Messi won his seventh Ballon d’Or on Monday night, beating Bayern Munich marksman Robert Lewandowski to the prize by 33 votes and his old rival Ronaldo – a five-time winner – by 435 votes, who ended up sixth in the voting.

Less than 48 hours after the Paris ceremony, Ronaldo poured scorn on the Argentine’s achievement by incredibly commenting ‘facts’ underneath a fan post detailing why the Portugal captain deserved the gong over Messi. 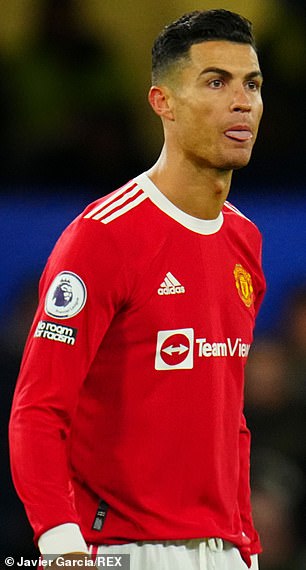 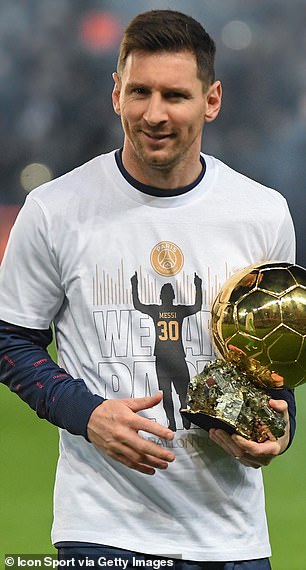 The post, on the page of a fan account called ‘Cristiano Ronaldo – The Legendary’ which Ronaldo himself follows, detailed Ronaldo’s 2021 achievements before describing Messi’s accolade as ‘Theft. Dirt. Shame. Simply regrettable.’

The bizarre Instagram post went on to describe Messi’s ‘shame’ in accepting the award he didn’t earn was there for all to see before Ronaldo made the ‘facts’ statement with a thumbs up and looking eyes emoji directly underneath.

The one-word statement made headlines and has reignited the never-ending debate over which player is the Greatest of All Time (GOAT). 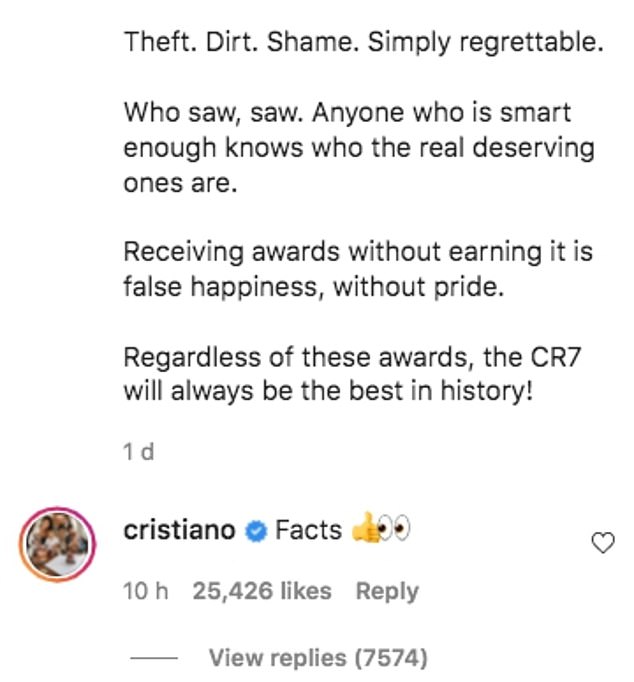 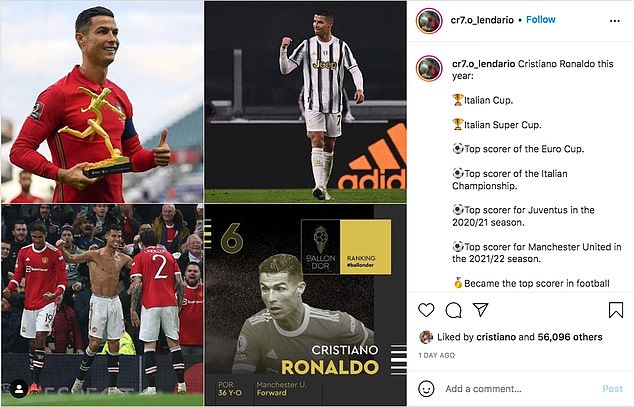 The post, on the page of a fan account called ‘Cristiano Ronaldo – The Legendary’, details Ronaldo’s 2021 achievements before pouring scorn on Messi’s seventh triumph

And this isn’t the first time Ronaldo has taken issue with Messi, either.

But while Ronaldo and Messi have largely kept things respectful while battling it out for the GOAT tag, what are the other defining quotes from Portuguese superstar that have added spice to their rivalry over the years? Sportsmail takes a look. 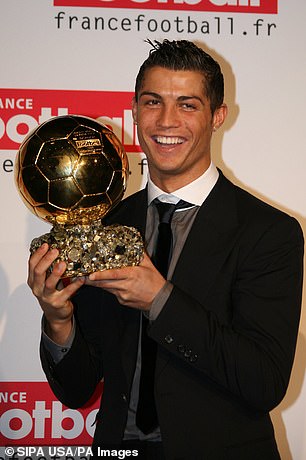 Ronaldo claimed he was the ‘first, second and third best player’ after winning the Ballon d’Or trophy for the first time in 2008

Following a stunning season with Manchester United that saw him score an incredible 42 goals in 49 games, Ronaldo was awarded his first Ballon d’Or trophy, beating Messi and Fernando Torres to the gong.

It would be the first time that Ronaldo and Messi would lock horns for the prestigious award and the first notable time Ronaldo would fan the flames in their rivalry.

After scooping the award, Ronaldo claimed he had no competition for the 2008 Ballon d’Or and that he should’ve finished in the two other podium places.

While his comment was said in jest, it kicked off what would be a rivalry that is still being contested to this day.

‘I am the first, second and third best player in the world,’ a tongue-in-cheek Ronaldo said in an interview with Brazilian daily O Estado de Sao Paulo.

‘But there are other good candidates, like Kaka, (Lionel) Messi and (Fernando) Torres.’

‘You cannot compare a Ferrari with a Porsche’ – After winning his first LaLiga title, May 2012

After making his world record £80million move to Real Madrid in 2009, Ronaldo would fianlly end up going head-to-head with Messi on the pitch in El Clasico.

After landing the first major blow, Messi would emphatically bounce back by landing the next four Ballon d’Ors while also winning LaLiga in Ronaldo’s first three campaigns at the Bernabeu.

The Portuguese talisman would finally get his first Spanish league title under the guidance of Jose Mourinho, leading him to claim that he is the better player despite having three less Ballon d’Or trophies at the time. 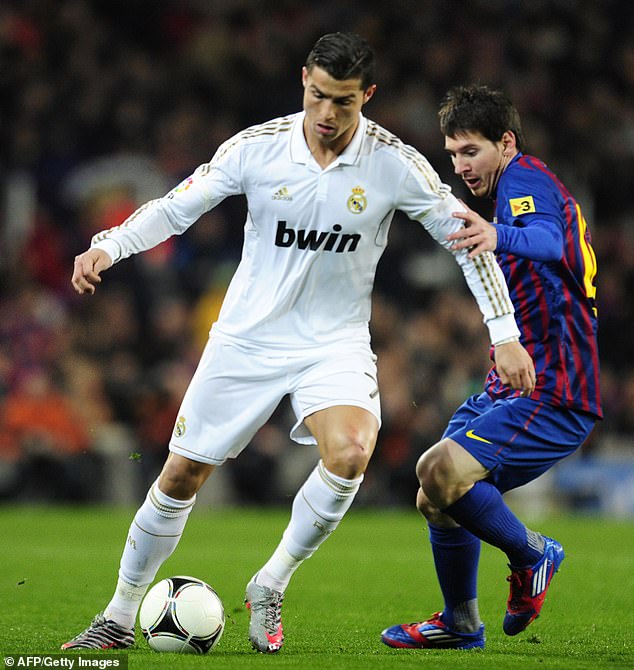 And while Ronaldo confidently claimed he was the better player, he insisted that they shouldn’t be compared because they were completely different players.

‘Some people say I’m better, other people say it’s him, but at the end of the day, they’re going to decide who is the best player,’ Ronaldo told CNN.

‘At the moment … I think it is me. Sometimes (the comparisons with Messi) makes me tired … for him too because they compare us together all the time.

‘I think we push each other sometimes in the competition, this is why the competition is so high. This is why Madrid and Barcelona are the best teams in the world because everyone pushes each other, not just me and Messi but other players.’

‘Motherf***er’ – Ronaldo denies reports he used a crude nickname for Messi while at Real Madrid, November 2014

While their rivalry had been fairly amicable up until this point, things appeared to have got heated in the years following, according to those in the Spanish media.

During the height of their tussles for team and individual accolades, Ronaldo was accused of regularly referring to Messi by the nickname ‘motherf***er’ by Spanish journalist Guillem Balague in his book, MESSI.

Ronaldo outright denied the claims and insisted that they were untrue.

‘News is circulating that I allegedly made offending remarks regarding Lionel Messi,’ Ronaldo wrote on his official Facebook page. 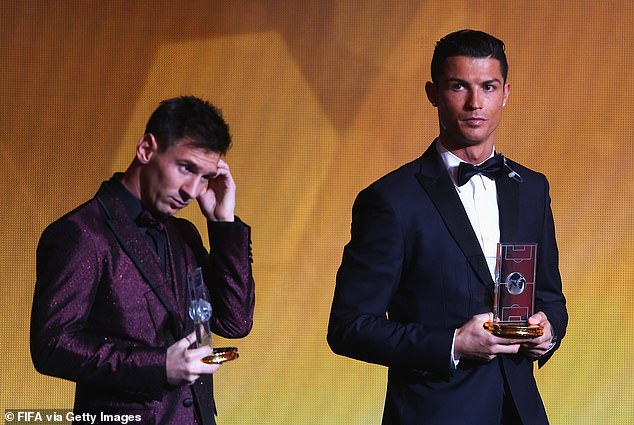 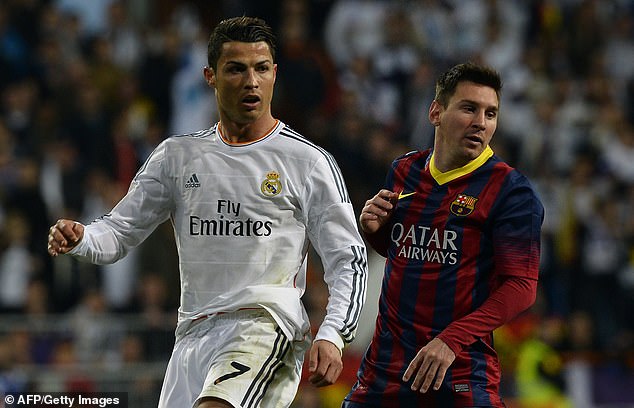 ‘This is absolutely false and I have assured my lawyer takes action to sue those responsible. I have the utmost respect for all my professional colleagues, and Messi is obviously no exception.’

Balague’s book discussed the relationship between the two, insisting they are not friends but act politely in public for the benefit of the media.

Balague went on to claim that several Real Madrid players relayed the information to him, and that Ronaldo not only calls Messi ‘motherf***er’ but also anyone who is caught speaking to the Argentine.

‘I don’t need their little hugs and kisses’ – Ronaldo doesn’t share the same affection like Messi does with Suarez and Neymar, February 2016

While Barcelona and Real Madrid boasted two of the best to have ever played the game at the same time, the debate between who was greater had a new variable added to the mix – which side had the best attacking trio.

At Barcelona, Messi was one third of the attacking trident alongside Neymar and Luis Suarez while Ronaldo was supported by Karim Benzema and Gareth Bale.

Many pointed out the similarities and differences between the two groups, with Messi forming close friendships with his team-mates both on and off the pitch while Ronaldo seemingly had issues co-exisiting with Bale.

But for Ronaldo, needing to be friends with his team-mates was not related to success and he insisted he doesn’t need the same affection the Barcelona trio shared to be great at what he does. 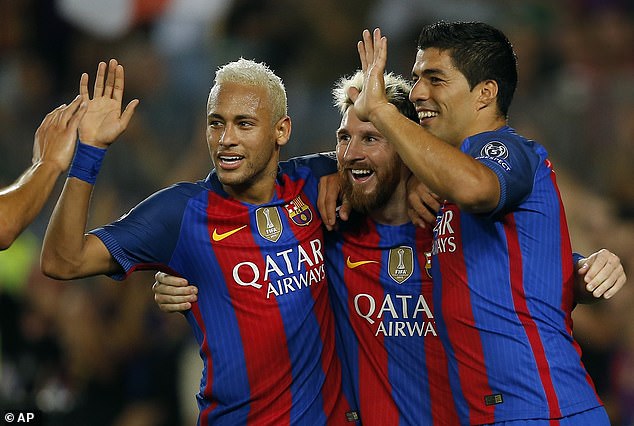 ‘How do we know that [their relationship] is that way?’ Ronaldo said, speaking about Messi, Suarez and Neymar’s bond. ‘It is only because that is what is written.

‘When I was at [Manchester] United, I didn’t speak [off the pitch] to [Ryan] Giggs, [Paul] Scholes and [Rio] Ferdinand apart from the normal ‘good morning’, but we won the Champions League.

‘We talked on the pitch and that is all that mattered. Does it matter that I don’t go out for dinner with [Karim] Benzema or that Bale does not come around my house? It’s not important. This thing about the little meals, the little hugs, the little kisses. To me that doesn’t mean anything.’

After winning LaLiga and the Champions League with Real Madrid, Ronaldo was sweeping up the individual accolades once again and was named as the 2016 Best FIFA’s Men’s Player after a stunning year before.

As he accepted the award at the gala ceremony in Zurich, Ronaldo made the sly dig at how Messi was not there in person to see him accept the award.

No player from Barcelona attended the ceremony and elected not to travel for the trophy presentation after the Catalan club claimed their bustling fixture schedule was to blame. 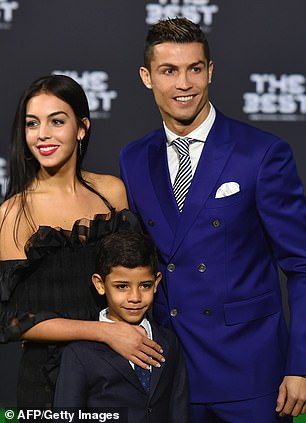 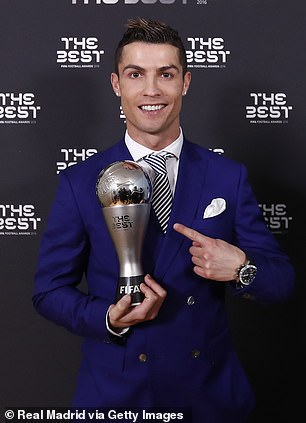 ‘I would like thank very warmly all those that voted for me, the fans, the captains and the media. Thank you,’ he beamed from the stage.

‘I don’t really have anything to add, awards speak for themselves. I’m really, really happy.

‘I’m sorry that some people from Barcelona aren’t here with us and that’s understandable but thank you to everyone. Thank you for what you’ve given me.’

According to Ronaldo’s own sister, Katia, the word ‘Messi’ is forbidden inside the Portuguese star’s home.

Katia insists that Ronaldo is eager to avoid football talk away from the pitch given their intense rivalry on it.

Ronaldo is one of the game’s fiercest competitiors and it’s no wonder that his old rival won’t be a topic of discussion during his downtime. 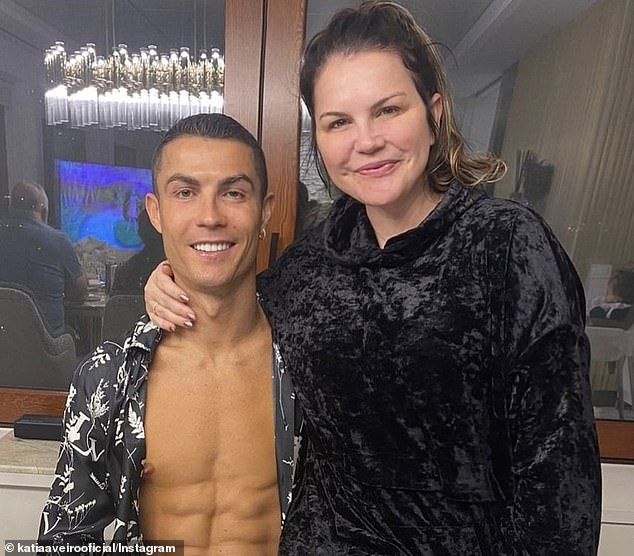 Ronaldo’s sister, Katia (right), insists Messi is not to be talked about in the forward’s home

‘We don’t talk about Messi inside the house,’ Katia told L’Equipe.

‘Cristiano knows that outside the door, there’s a whirlwind and he knows that, when he crosses the door from the outside to the inside he is protected. This is where he recharges all his batteries.’

‘Maybe he misses me’ – On whether Messi needs him after Ronaldo’s move to Juventus, December 2018

Ronaldo ended his trophy-laden spell at Real Madrid to make a sensational £100m move to Juventus in the summer of 2018.

The forward was looking to add another string to his bow, given the fact he had dominated in both England and Spain up until that point and now Italy was his next destination.

His move to the Serie A saw his direct rivalry with Messi come to an end after nine seasons, which saw him offer a direct challenge to the Argentine to come join him in the league. 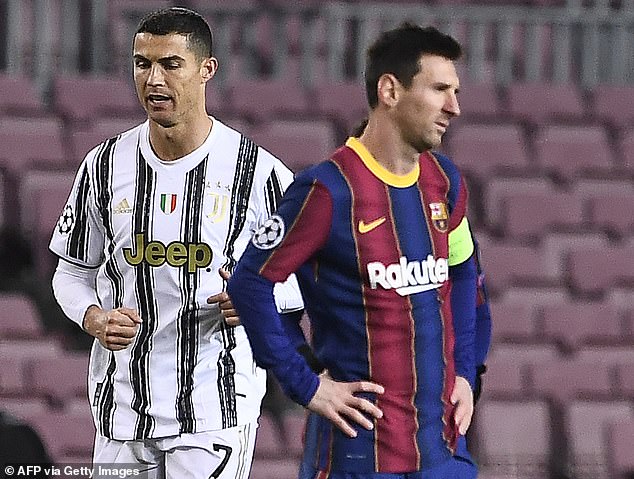 When asked by Gazzetta dello Sport whether he missed Messi, Ronaldo said: ‘No, maybe he misses me. I played in England, Spain, Italy, Portugal, in the national team, while he is still in Spain.

‘Like me, accept the challenge. However, if he is happy there, I respect him, he is a fantastic player, a good guy but I do not miss anything here.

‘I would love more and I deserve it’ – On having more Ballon d’Or awards than Messi, September 2019

In 2018, Luka Modric sensationally broke Messi and Ronaldo’s strangehold on the Ballon d’Or trophy, winning the award in 2018.

Ronaldo and Messi were both tied on five Ballon d’Ors each and were both in contention to win the next one in 2019.

With both entering the latter stages of the storied careers, whoever took the next one of two awards would surely finish with the more golden balls.

An emotional Ronaldo insisted he wanted to be the man to set that record but unfortunately for him, it would be Messi who would go on to claim the gong for a record sixth time months later. 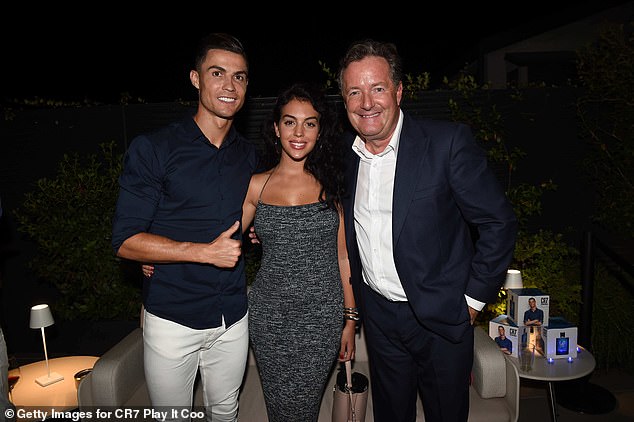 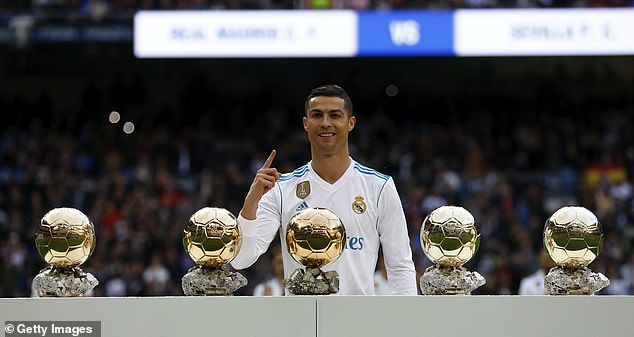 ‘I would love [more], and I think I deserve it,’ Ronaldo told Piers Morgan when asked what records he wanted to set before retiring.

‘Messi is a fantastic guy, a fantastic player. He’s in the history of football – but I think I have to have six or seven or eight to be above him.

‘My relationship with him is, we are not friends, but we have shared this stage for 15 years.