Manchester United have signed Alex Telles to bolster their beleaguered defence – but will the Brazilian make a name for himself at the other end of the pitch instead?

Telles has long been linked with a move to the Premier League, first cropping up on Chelsea’s radar in 2015 while a promising youngster at Galatasaray. But in more recent years, he has been busy impressing on the Iberian peninsula, scoring 21 goals across five seasons from left-back for Porto.

United have finally got their man after a protracted battle to secure his signature, and the remaining length on his Porto contract – which expires next June – seemingly played its part.

Now entering the prime of his career at 27, can Telles fulfil club legend Ryan Giggs’ prediction that the left-back can provide a level of quality Manchester United “have been missing” in recent years – starting with their Saturday Night Football clash with Chelsea, live on Sky Sports Premier League and Main Event?

It is no secret that Telles’ strengths lie in his attacking output. No-one has made more goals since Porto moved into the Estadio do Dragao back in 2003 than the Brazilian, whose heritage offers more than a nod to his style of play.

Roberto Carlos, Marcelo, Dani Alves, and countless more of his countrymen have taken the game to the opposition from full-back in recent years, while notable figures, including Danilo and Alex Sandro, have done so in the blue of Porto. Telles is little different, racking up 11 goals and eight assists in the Primeira Liga last season.

Now donning Manchester United’s red, there is certainly a strong case to be made about how the Brazilian can improve their backline, as much when they have the ball than when they do not.

“You look at Liverpool, Trent Alexander-Arnold and Andrew Robertson and the goals and assists that they provide,” Giggs – among United’s most productive attacking outlets of all time – told the Webby and O’Neill podcast. “In Telles, I think that’s something we’ve been missing

While Luke Shaw and Brandon Williams, the club’s two regular left-backs in 2019/20, failed to register a single assist between them across the campaign, Telles was busy attempting an average of 10 crosses per game down the Porto left, completing around a quarter.

Even so, his impressive output should come with a word of caution; Telles has long had something approaching free-reign over Porto’s set-pieces. Eight of his 11 goals in 2019/20 came from the penalty spot – something Bruno Fernandes may have something to say about at Old Trafford – and six of his eight assists from set-pieces.

In fact, Shaw’s rate of chance creation in open play outstripped the Brazilian by about 25 per cent – but aside from a brief flurry of four assists in a 2018/19 campaign where the ex-Southampton man shone, his seven years at Old Trafford have rarely showcased the attacking promise he displayed up and down the left flank in his younger years on the south coast, and certainly nowhere near the extent of the new arrival. 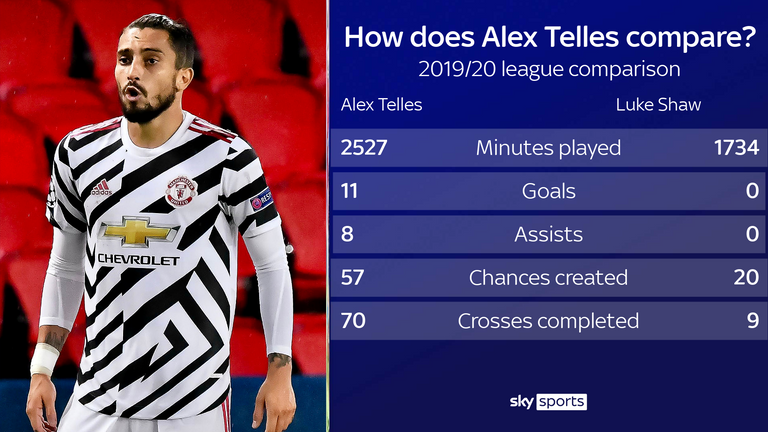 “Although he is a left defender, Telles has been an essential part of Porto’s offensive game,” Andre Monteiro, who covers Porto for national Portuguese newspaper Record, told Sky Sports. “His whipped crosses are excellent and very difficult to defend.”

Another issue to bear in mind is the direct comparison between different clubs and leagues, but just as Porto spent much of 2019/20 dominating possession, so too did Manchester United – albeit they often wished they did not, winning only 11 of 28 games where they had the majority of the ball.

Having an additional attacking prong of the quality of Telles could provide a useful spark when looking to unpick the kind of low block which has often frustrated them under Ole Gunnar Solskjaer.

“He is very Brazilian in his approach,” Vitor Goncalves of Portuguese national broadcaster RTP added. “His passing is very good – that’s one thing that makes him different, even from other Brazilian left-backs.”

In isolation, Telles’ passing stats do not make remarkable reading, the fact he created 57 chances, the seventh-highest tally across the entire division, certainly does.

Just as Brazilian full-backs are known for their attacking prowess, so too has their defensive quality been called into question at times, and Telles’ ability without the ball has divided opinion among those who have studied him closely at the Dragao.

This is where direct comparisons become more difficult. The challenges of the Primeira Liga have not offered him the same tests he will face in the Premier League, with Porto and Benfica’s dominance such that the league trophy has travelled between their two trophy cabinets alone in every season since 2002. Further back, the last time Porto conceded more than a goal a game across a league season was 1997/98.

On the bigger stage he has certainly found life more challenging, as have his Porto team-mates – in a 2-0 loss to Rangers in last season’s Europa League, the Scottish side’s first goal came from a cross he had poorly defended, while in their 4-1 home defeat to Liverpool the previous year, he completely lost Sadio Mane for the eventual winners’ opener.

“He is not as good defensively as he is going forward,” Goncalves told Sky Sports. “But he is definitely, in the mould of Brazilian full-backs, more of a defender than a winger.”

Certainly, Solskjaer’s decision to employ Telles as a wing-back on debut in Manchester United’s 2-1 win at PSG in midweek hints at where he views the Brazilian’s strengths and limitations.

But in a league known for its physicality, his own power and pace could be suited to the defensive rigours of the English game, in the mind of Monteiro.

“He has no problem with defensive tasks,” he said. “Telles has a good positional sense and is very good in one-on-one situations.

“His tackling is one of his strong points, as well as his strength. I really think the Premier League is the best place for him, not just for his offensive way of playing but his physical ability. I think he would find it much tougher to showcase his ability in the Italian or Spanish leagues.”

Whether Telles can help shore up a Manchester United defence which has already shipped more than a third of the goals it let in during the whole of 2019/20 in its opening four games is difficult to answer. Whether he is even meant to, based on Solskjaer’s early designs for his new full-back, is another question.

One thing which does seem more likely is that United have acquired a top-quality addition to their ranks, in the era of the modern full-back, in a position which badly needed improving. And for all Solskjaer’s frustration at attempting to crack open fortified opposition defences last season, the new arrival at the back may provide some real respite going forward.

Tags: Alex, How, Manchester, Telles:, un
You may also like
Latest Posts

Recovering Raquel Clark has her comeback bid delayed by COVID
Recent Posts
This website uses cookies to improve your user experience and to provide you with advertisements that are relevant to your interests. By continuing to browse the site you are agreeing to our use of cookies.Ok