Sky Sports’ Andy Walker offers his predictions as we head into another weekend of Scottish Premiership action.

Everyone was taken by surprise when St Mirren managed to become the first Scottish side in nine months to defeat Rangers on Wednesday night, the chance of securing the first trophy of the season has gone for Steven Gerrard. Having gone 27 games unbeaten, no one thought that run would end in Paisley.

Realistically though, the only show in town this season is the league title for Rangers and they have a chance of extending their lead at the top of the table to 16 points with a win, given that Celtic are on Scottish Cup final duty on Sunday.

Alfredo Morelos will be missing for Rangers after the club accepted a retrospective two-game ban after the Colombian’s yellow card offence last weekend at Tannadice was upgraded to a red.

Motherwell travel to Ibrox in poor form having lost at home to St Mirren last time out but in Declan Gallagher, Alan Campbell and Tony Watt, they do have players capable of playing well on a big stage.

Hibs are enjoying a good spell at the moment, winning their last four games in all competitions. I saw them dismantle Hamilton last weekend when they could have won by an even more convincing margin than the four goals they got.

Kevin Nisbet was in tremendous form, as well as getting a goal his game outside the box was very impressive. It won’t be easy against a United side who ran Rangers close in a narrow 2-1 defeat at Tannadice.

Micky Mellon has his team well organised and hard to beat but it’s the number of potential matchwinners on the home side that should see them edge it.

Stuart Kettlewell is very quickly finding out that life back in the top-flight has a harsh reality to it. His team are now nine league games without a win and have slipped to the bottom of the table. It’s remarkable that in the middle of that spell they were able to beat Celtic in Glasgow on League Cup duty, a win that highlights what they are capable of.

Securing all three points here would lift them off the bottom of the table. Accies, despite losing 11 of their league games and conceding a league-high 40 goals, know how to win the big games against sides around them. They’ve been doing it for years and despite losing heavily last weekend at home to Hibs, I can see them bouncing back quickly here. 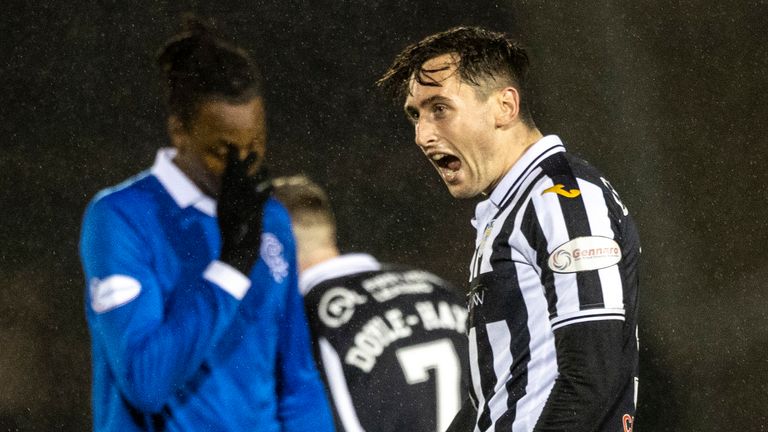 What a week for Jim Goodwin and his men! They produced a result against all the odds by beating Rangers in the League Cup, scoring three goals into the bargain and securing a place in the semi-finals. This outstanding result came on the back of a vital win at Fir Park last weekend against Motherwell to take them off the foot of the table.

Can they build on that with another victory over Calum Davidson’s men? Well, they too secured a place in the semi-finals of the League Cup with a win over Dunfermline on penalties.

Their recent form had been good, holding Celtic to a draw in Glasgow while on an 11-game unbeaten run, but defeat at home to Livingston ended that impressive streak. I can’t separate the two sides.

Kilmarnock boss Alex Dyer wasn’t too impressed with his players last weekend at Celtic Park when they started the match well but fell away badly in the second half. In reality though, Dyer has been able to rely on his players more often than not this season and a home game against an Aberdeen side who beat Ross County last weekend will be tough.

It’s extraordinary to think that Kilmarnock have only managed one victory in their last 26 league meetings with Derek McInnes’ men. Right now, Killie are struggling to score goals while Aberdeen have only lost one of their last 12 away league games. Curtis Main was given a chance in attack against Ross County and he took it, scoring both goal in a 2-0 home win.